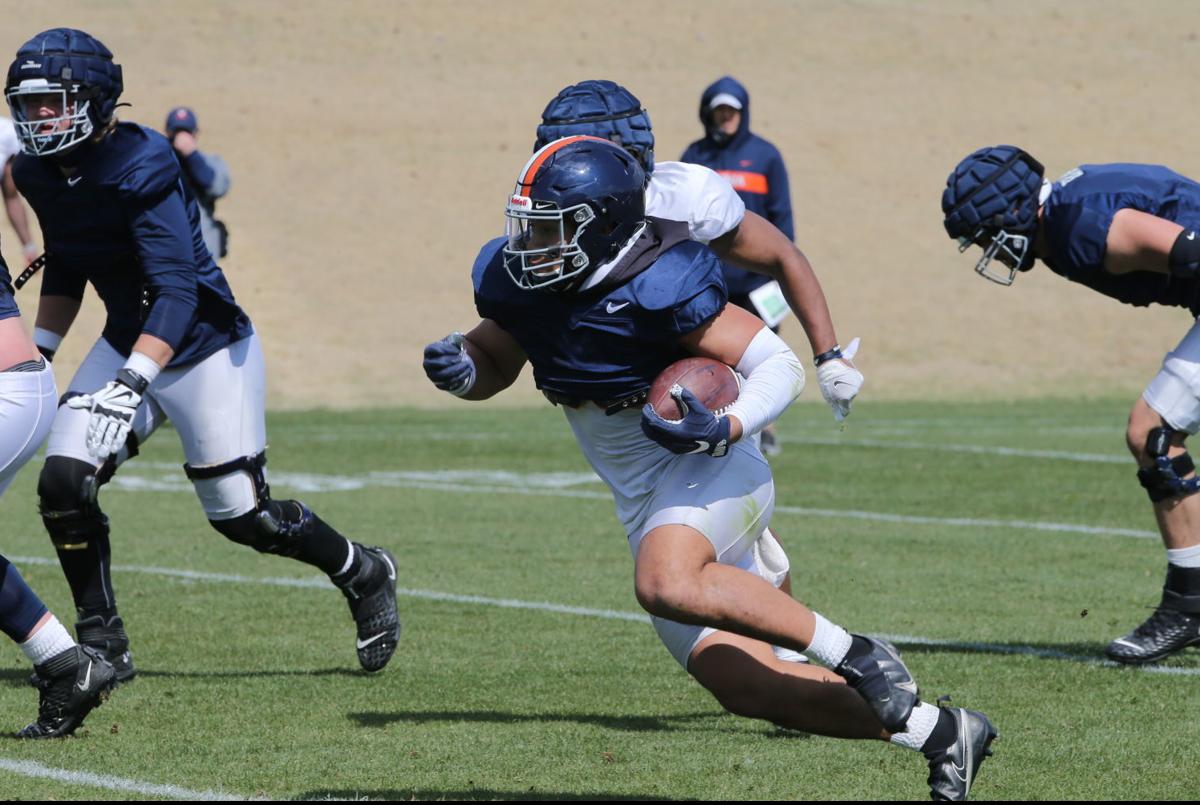 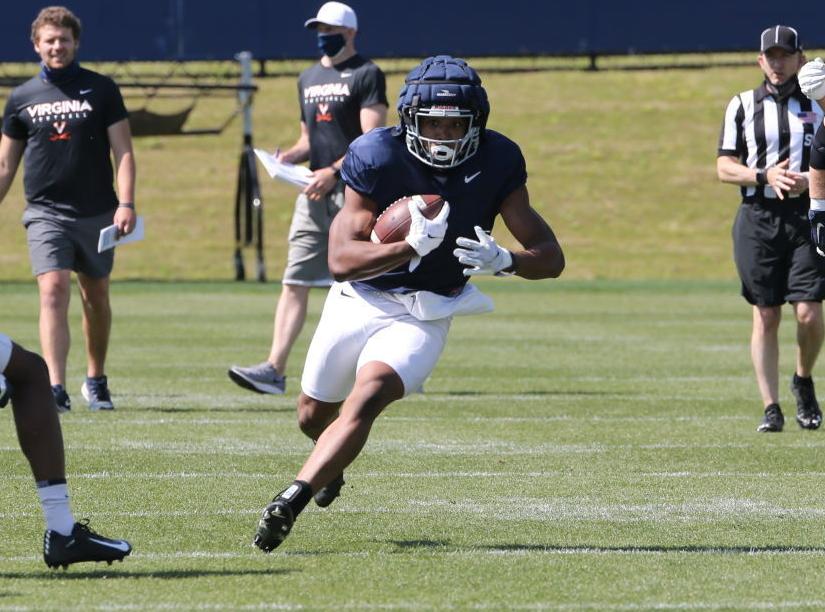 UVA running back Ronnie Walker is competing for the starting job this spring.

CHARLOTTESVILLE – Ronnie Walker and Wayne Taulapapa know the statistic. For each of the past two seasons, Virginia’s football team has been led in rushing by its quarterback, first by the electric Bryce Perkins and, last year, by the rugged Brennan Armstrong.

The Cavaliers, who wrap up spring practice Saturday with a spring game at Scott Stadium, ranked ninth in the ACC in rushing in 2020, averaging 162.7 yards per game on the ground on their way to a 5-5 season. But of their 1,627 net rushing yards, 879 came from quarterbacks. Armstrong finished as the team’s leading rusher. His 552 yards made him UVA’s only rusher in the Top 25 in the ACC, the only team that didn’t have a running back in those ranks.

Developing a more traditional run game has been a focus for the offense this spring, as Taulapapa, Walker, Mike Hollins and Amaad Foston have competed for carries.

Taulapapa – the team’s most productive running back each of the past two seasons – and Walker are leading the way this spring. Hollins has been working himself back into football shape after opting out of the 2020 season due to COVID-19 concerns.

In the fall, Virginia will also add Harvard graduate transfer Devin Darrington to the group.

“It’s the deepest our running backs have been since I’ve been the coach,” said Bronco Mendenhall. “That’s five quality running backs and great competition.”

Add to that the fact that Virginia returns its deepest and most talented offensive line in Mendenhall’s tenure in Charlottesville, and it’s easy to understand why the team thinks it could be poised for a breakout season running the ball with its backs.

The Cavaliers returned four of five starters on the offensive line and are likely to lineup a front five that features four seniors and a junior.

“You feel safe running behind those boys up front,” said Taulapapa. “You just feel safe knowing that the guys in front of you are all veterans.”

Mendenhall praised Taulapapa for his work since the season ended, noting the 5-foot-9, 200-pound Hawaiian was “almost unbeatable in every drill in the offseason.”

Taulapapa, who has run for 884 yards on 204 carries and 17 touchdowns the past two seasons, said he’s played “with a lot more passion for the game,” as he approaches his senior season.

“We talked about, early in the spring season, just finding new ways to be motivated,” he said.

One of the things that motivates both Taulapapa and Walker is the desire to shed the label that UVA’s offense only runs its backs between the tackles. In addition to a focus on running hard and breaking big plays, the backs said, this spring, with a talented and experienced offensive line, the Cavaliers are out to diversify the ways their run game can stress opposing defenses.

“That will become part of the concept, us reading a lot better and using those sides of the field where open grass is, no matter what,” said Taulapapa. “Now, we’re going to more dimensions of how we run the ball.”

A year ago, Virginia managed just four rushing plays that went for 30 yards or more, the fewest in the ACC. It’s starting to see signs that could change. During Thursday’s practice, Walker said he broke off a touchdown run of more than 70 yards.

When he reached the end zone, tackle Ryan Nelson ended up being the first guy to greet him and celebrate.

“I can run inside the box, outside the box,” said Walker. “I can’t wait to show our coaches that we’re ready to open the run game up.”

Rayshard Ashby knows so much of the NFL draft process is a mystery for prospects. Which teams fell in love with his instincts and tackling ability? Which ones were scared off by questions about his coverage skills?

"He can absolutely fly, and there wasn’t a defense we saw that could keep him from getting over the top on them."

With its series win over Virginia Tech, the Virginia baseball team has a shot at returning to .500 in the ACC and bolstering its NCAA Tournament resume with strong play down the stretch.

"I was talking to my girl and told her that, yeah, I just put my name in the transfer portal. Next thing you know, I’m on Twitter and I have probably six UVA coaches texting me.”

As soon as the San Francisco 49ers traded three first round picks to move up to No. 3 overall, it became clear that quarterbacks would come of…

UVA running back Ronnie Walker is competing for the starting job this spring.