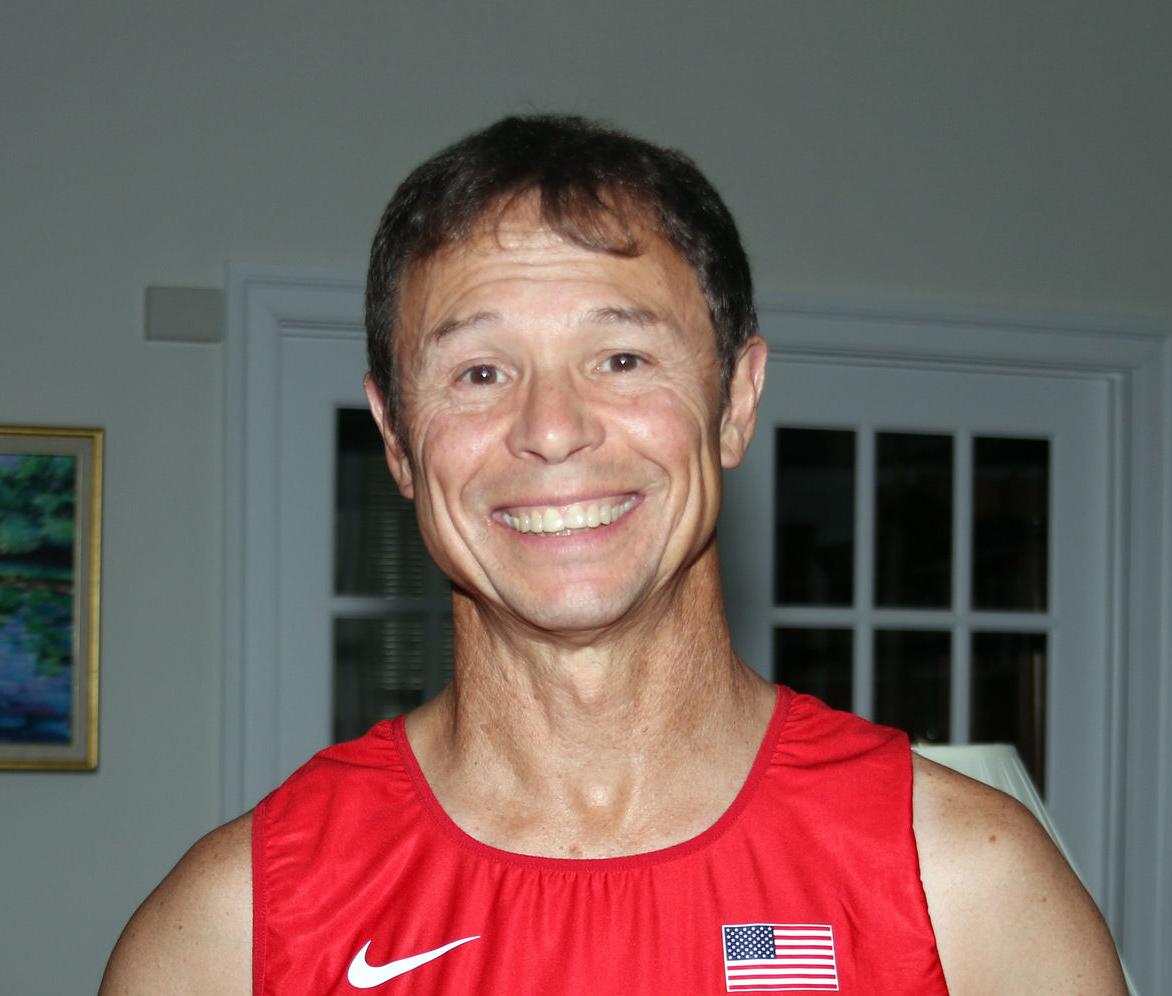 Tony Markley, a 65-year-old Culpeper County resident, has been participating in national track meets since he was 46 years old. 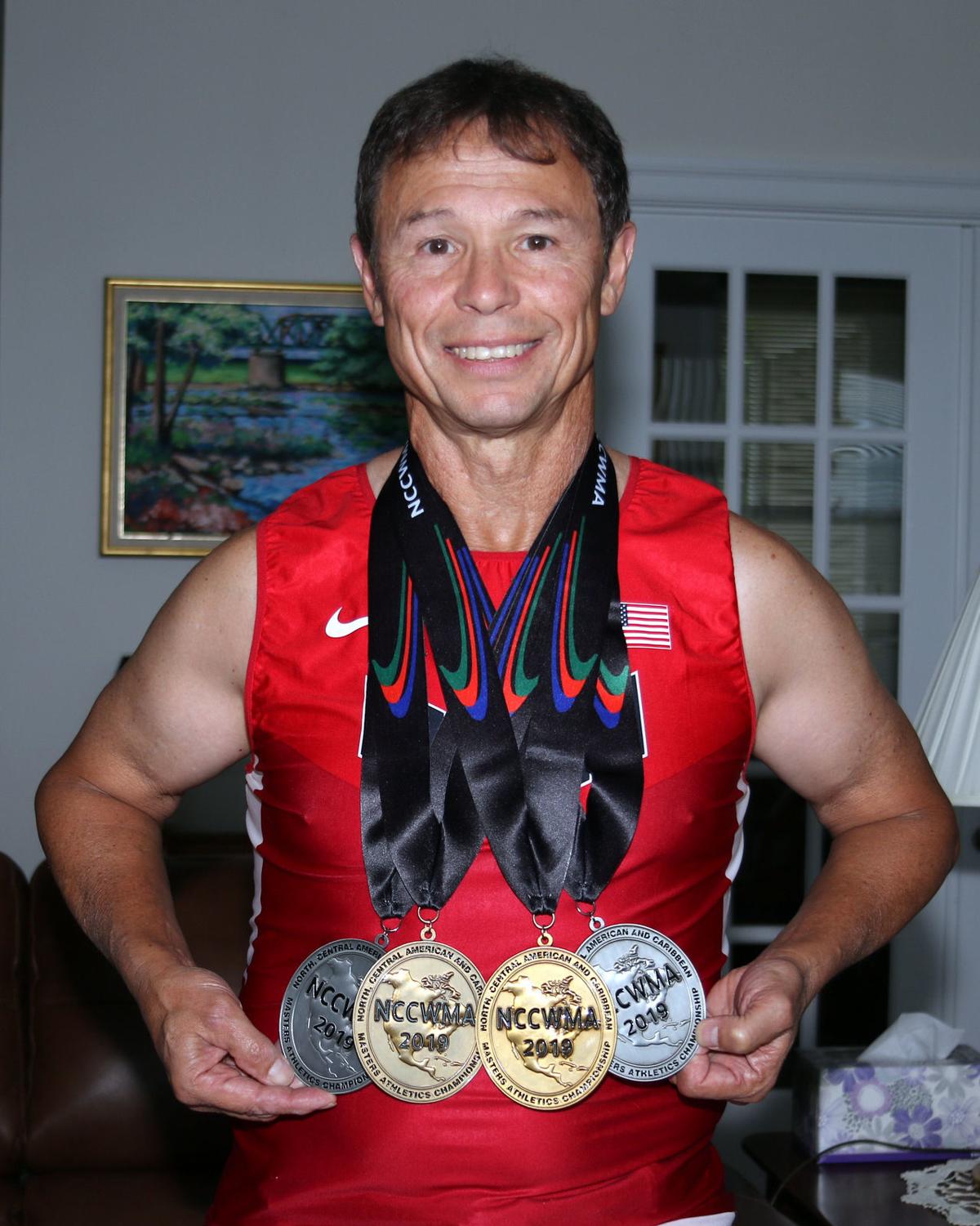 Tony Markley poses with the medals he recently won at an international competition in Toronto. The 65-year-old Culpeper County resident, has been participating in national track meets since he was 46 years old.

Tony Markley was 46 years old when his sons showed interest in trying out for their high school track and cross country teams.

Wanting to help them decide what events they might be interested in participating in, Markley took them to an all-comers track meet at the Potomac Valley Track Club in Alexandria.

“I wanted them to try different things and see which ones they liked,” he said. “But I told them, ‘I’m not going to just sit around and wait for you while we’re here; I’m going to try out some things myself.’”

That one simple decision by Markley would have far-reaching effects on his life that he couldn’t possibly have imagined at the time.

Nearly two decades later, Markley, now 65, is an avid runner with world-class accolades to show for it.

Markley, a Culpeper County resident since 2016, recently competed in the World Masters Association’s North America, Central America and Caribbean Masters Track and Field Championships in Toronto from July 18-21. He participated in 10 different events at the meet, bringing home medals in four of them and finishing in the top six in all but one.

“I began competing in national meets about 10 years ago,” he said. “I had to scale back what I did for a while, because I was suffering a lot of muscle injuries. At that point, I began doing a little bit of distance running as well.”

After retiring in May 2018, Markley decided to enter an all-comers meet in Charlottesville, where he opted to participate in the 100-meter sprint. Competing against two high-schoolers and three young adults, he clocked in at 14 seconds flat, finishing third.

Surprised at his own performance, Markley said he had an epiphany.

“The only two people that beat me were those two high-schoolers,” he said with a grin. “I realized that I may still have some wheels, so I began to get back into those types of events again after that.”

Markley entered the Delaware Senior Games after that, and he later competed in a national indoor meet in North Carolina last winter, which was his final major event before the meet in Toronto.

“I didn’t medal in [North Carolina], but I felt good about my performance,” he said. “It gave me a boost going into Toronto.”

Markley notched silver in both the pentathlon and the high jump. In addition, he was fourth in the 100 sprint and the 300 hurdles, fifth in the 200 sprint and 100 hurdles and sixth in the long jump.

“It was truly an honor to be able to travel to [Toronto] and represent the United States,” he said. “I was also very flattered to be selected by Team USA to participate in the relay events.”

Markley admits that, while it feels good to perform as well as he has, his other objective at this point is to show people of all ages that they can go out and do whatever they want.

“It’s not just me out there doing these meets,” he said. “There are people who are older than I am that are out there competing. At one meet, there was a 100-year-old woman participating. At one of the first meets I ever went to, there was a 69-year-old man that beat me. He had been doing these for years, and he told me to keep at it and I would improve as time passed—he was correct.”

Markley went on to pass on some words of inspiration to anyone that may be hesitant to become active.

“It’s never too late,” he said. “It’s all about small victories, whether you’re new at whatever you’re trying to do or you’ve been doing it for a while. And there are going to be setbacks; I’ve had the muscle injuries and other health issues that have sidelined me from time to time. You just have to get up and get back out there.”

When we first met Tony Markley almost two years ago, he was blazing a trail throughout the masters track and field circuit.

Tony Markley, a 65-year-old Culpeper County resident, has been participating in national track meets since he was 46 years old.

Tony Markley poses with the medals he recently won at an international competition in Toronto. The 65-year-old Culpeper County resident, has been participating in national track meets since he was 46 years old.