High school field hockey: Jaw on the mend, Hatfield takes a bite out of Knights
0 comments
Share this
Return to homepage × 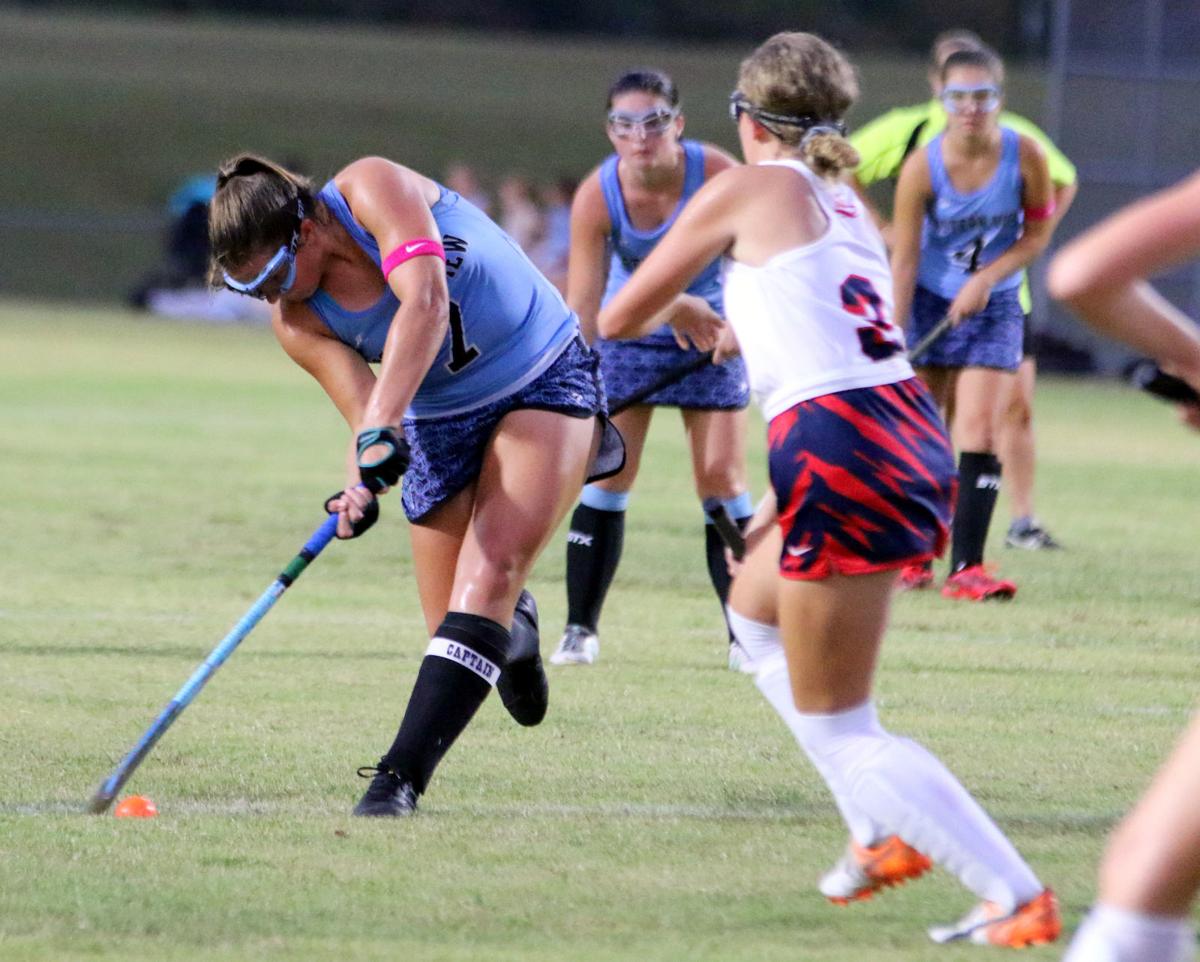 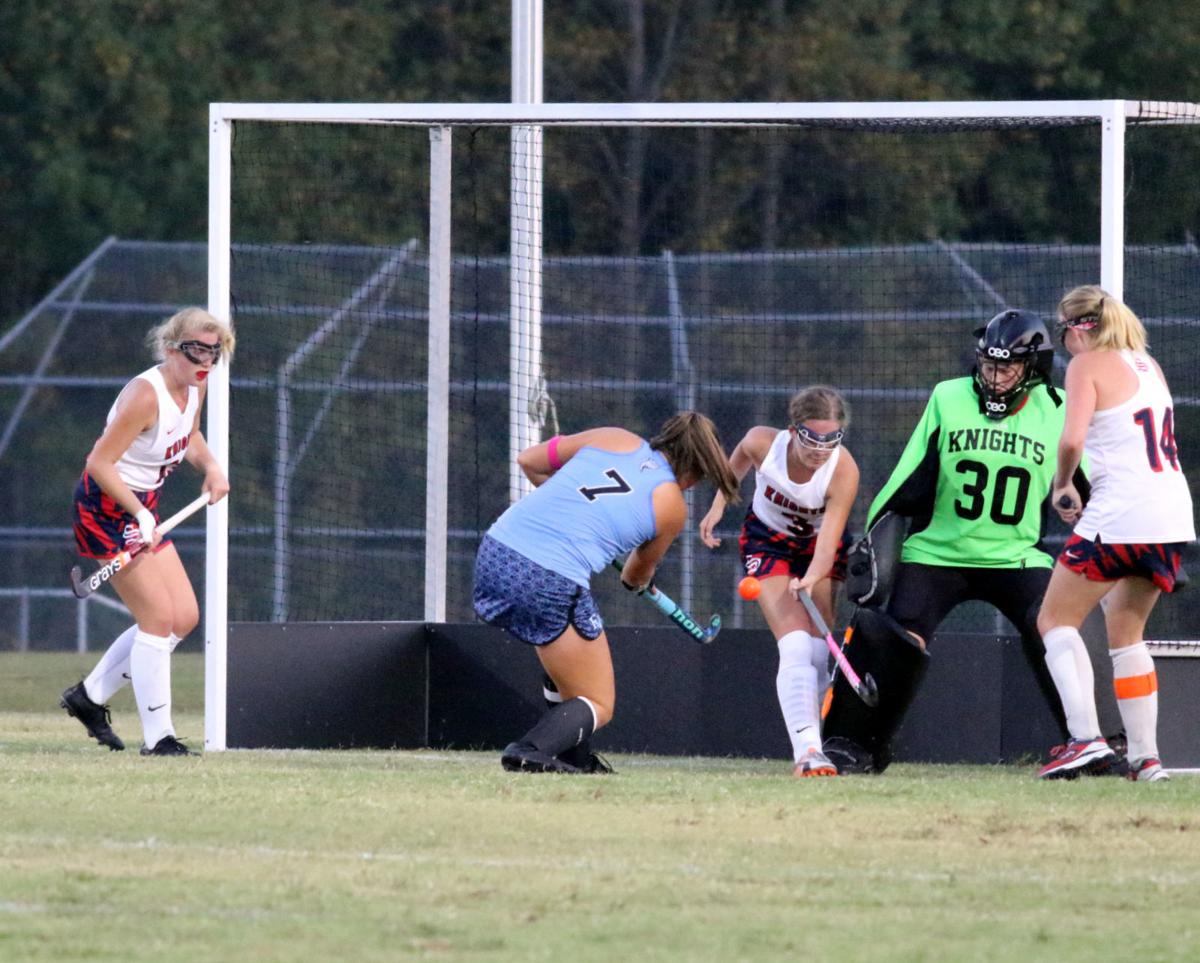 Eastern View's Sarah Hatfield (7) scores one of her four goals against Spotsylvania on Tuesday night. 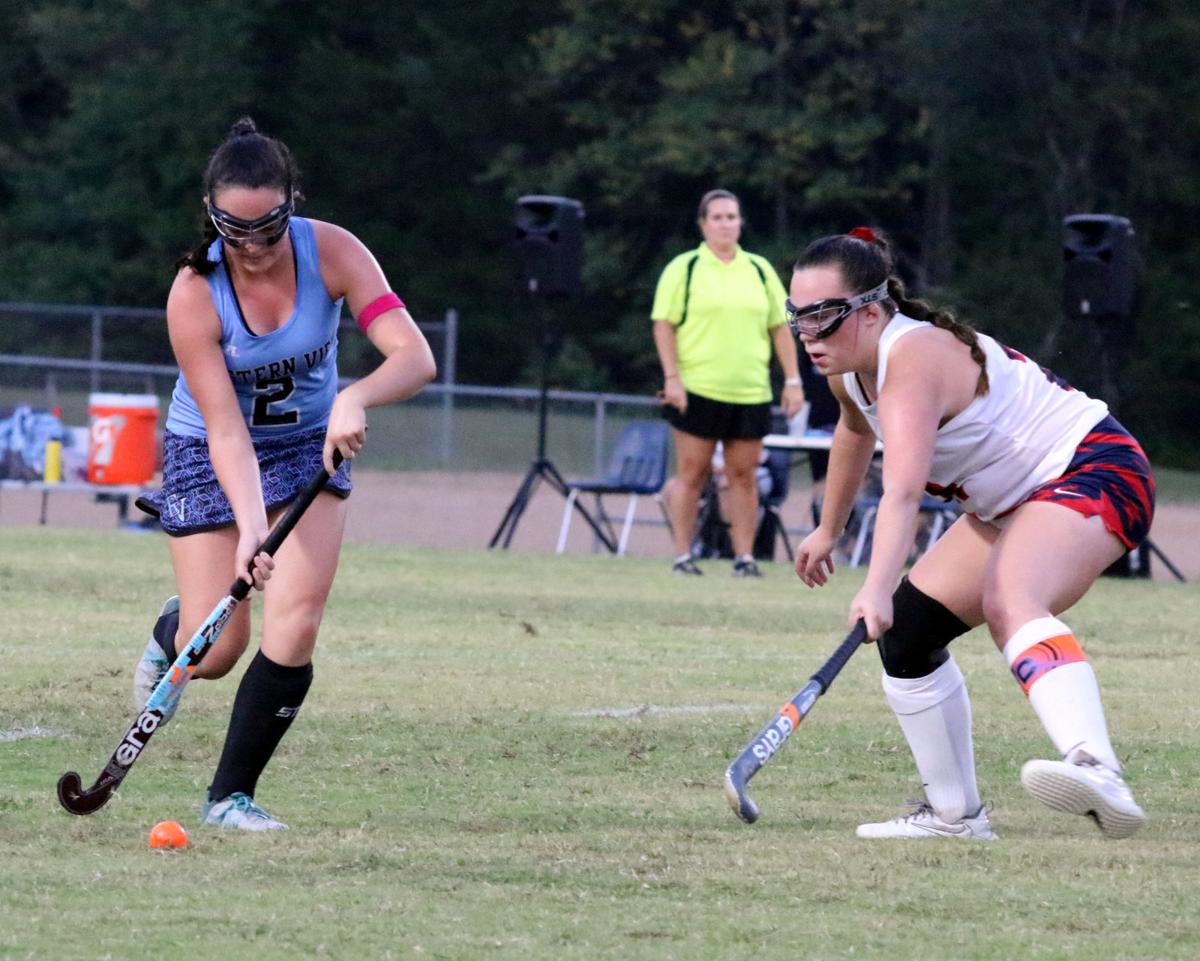 Contrary to popular belief, the term “hat trick” was not created to describe the goal-scoring prowess of Eastern View’s Sarah Hatfield.

Hatfield, who recently eclipsed the 100-goal milestone in her career, turned in the kind of performance that those who follow the Cyclones’ field hockey team have come to expect in Tuesday night’s game at Spotsylvania. The senior all-state performer scored four goals—yes, a hat trick—to lead Eastern View to a 7-0 victory.

While hat tricks have become a common occurrence throughout Hatfield’s career, a scary moment during a game against Chancellor just one week ago left many wondering if they’d seen the last of her in a Cyclones uniform.

With 13 minutes remaining in the first half of that game, Hatfield took a hard shot to the jaw from an opposing player’s stick. She was forced to leave the game—which Eastern View (8-2 overall, 4-2 Battlefield District) ended up losing 5-0—and was taken to the hospital for x-rays by her father Greg at halftime.

“It was scary,” said Greg Hatfield, who is Eastern View’s head football coach. “We really thought her jaw was broken, which probably would’ve put her out through basketball season. But we were very lucky that wasn’t the case.”

Lucky is one word to describe Hatfield’s injury, which wound up being a severe contusion with no facial fractures. Her jaw swelled up, but has gotten progressively better in the week since.

Hatfield’s prognosis meant bad news for Spotsylvania (3-7 overall, 1-5 district) on Tuesday evening. She found the back of the cage for the first time with 22:52 left in the first half, then followed that up rather quickly with another tally at the 21:31 mark as the Cyclones hit the ground running and never looked back.

“[My jaw] still hurts,” Hatfield said, “but it’s getting better every day. I think that we took a step in the right direction as a team tonight, and I’m glad that I could score four goals to contribute to that.”

Hatfield scored her third goal of the opening stanza with 15:25 remaining before intermission, then completed the hat trick with a slap shot from the left side at the 18:53 mark of the second half.

“The first few days [after the injury] were rough for Sarah,” Eastern View assistant coach Marianne Bretschneider said. “Beyond just the pain she was in, nutrition was a challenge because of her jaw being so swollen and what little she could eat. So we’ve tried to really focus on keeping her hydrated and getting her as many nutrients as possible. To her credit, she still stepped up for us [tonight].”

Hatfield wasn’t the only Cyclone to step up against the Knights. Fellow senior Cassidy Morrison collected a pair of goals on the evening, while junior Avery Stanley added one of her own.

Morrison’s first score came late in the first half and gave Eastern View a 5-0 lead heading into the locker room. Her second, with 19:55 remaining in the second stanza, put the Cyclones up 6-0 and necessitated a running clock via the six-goal mercy rule.

Despite the offensive explosion, Hatfield said she was more pleased with her team’s passing and defense.

“We made some nice passes and our defense is continuing to get better game by game,” she said. “That’s what’s important to us: to be a better team with each game and each week.”

Eastern View returns to action next Tuesday when it travels to James Monroe.

When the Virginia High School League voted in July to postpone fall sports to at least Feb. 2021, Leesburg resident Holly Wiles found herself …

Local fighter hopes his beefs carry him to the big time

Far, far away from the bright lights of the UFC and big-time mixed martial arts, a number of small, underground organizations exist to provide…

Last month, the Virginia High School League unveiled a rough draft of its plan to restart sports, the crux of which was based around its membe…

The once-reluctant league brought racial injustice to the forefront on the NFL's first full slate of games Sunday.

In the world of MMA, fighters are used to playing the waiting game.

'It wasn't even close': Fuente says COVID was under control for Hokies until students returned

“We have been really, really good all summer long and all through fall camp. I can tell you that much. We were knocking it out of the park.”

Kyler Murray vs. Chase Young is the best Week 2 matchup not getting national attention

"He’s such an elusive guy; he gives me anxiety."

The NCAA men’s and women’s basketball season will begin Nov. 25, the day before Thanksgiving.

Eastern View's Sarah Hatfield (7) scores one of her four goals against Spotsylvania on Tuesday night.