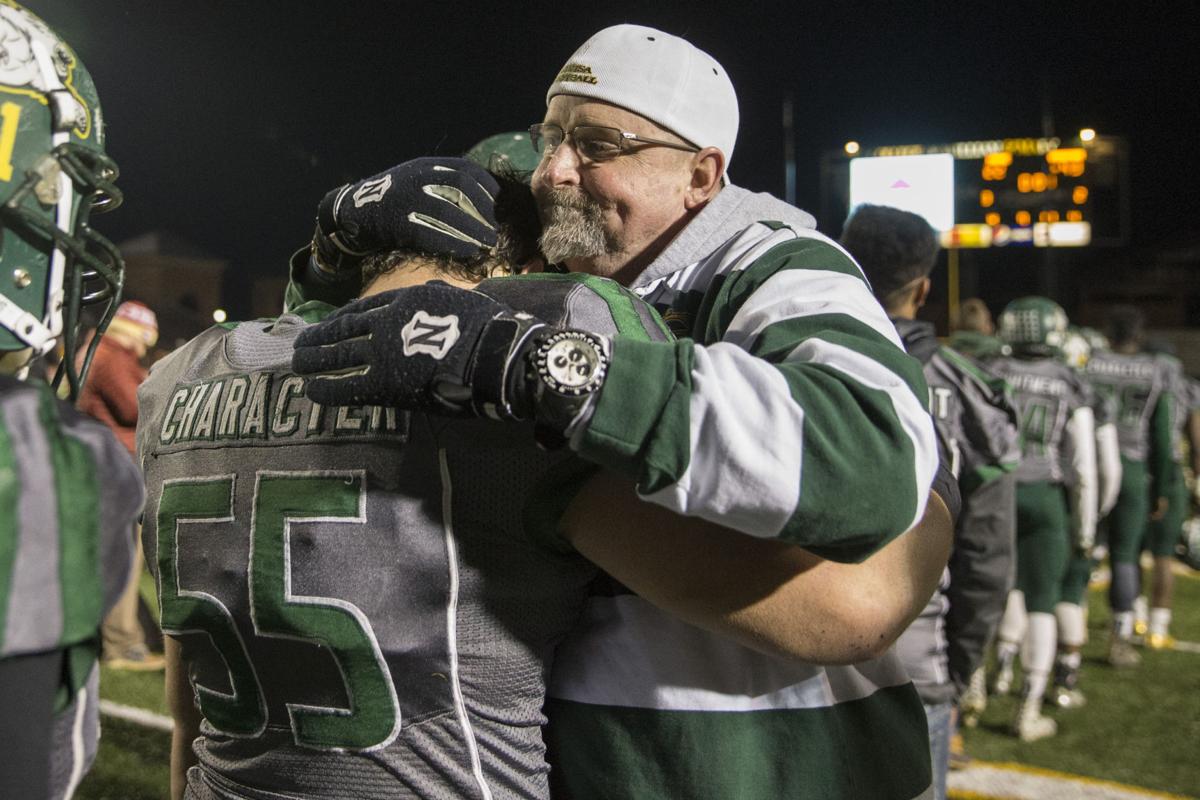 Louisa head coach Mark Fischer hugs Dusty Matney following the Lions’ 43-22 loss to Salem in the VHSL Class 4 state championship in 2017. It was Fischer’s last season with the Lions. 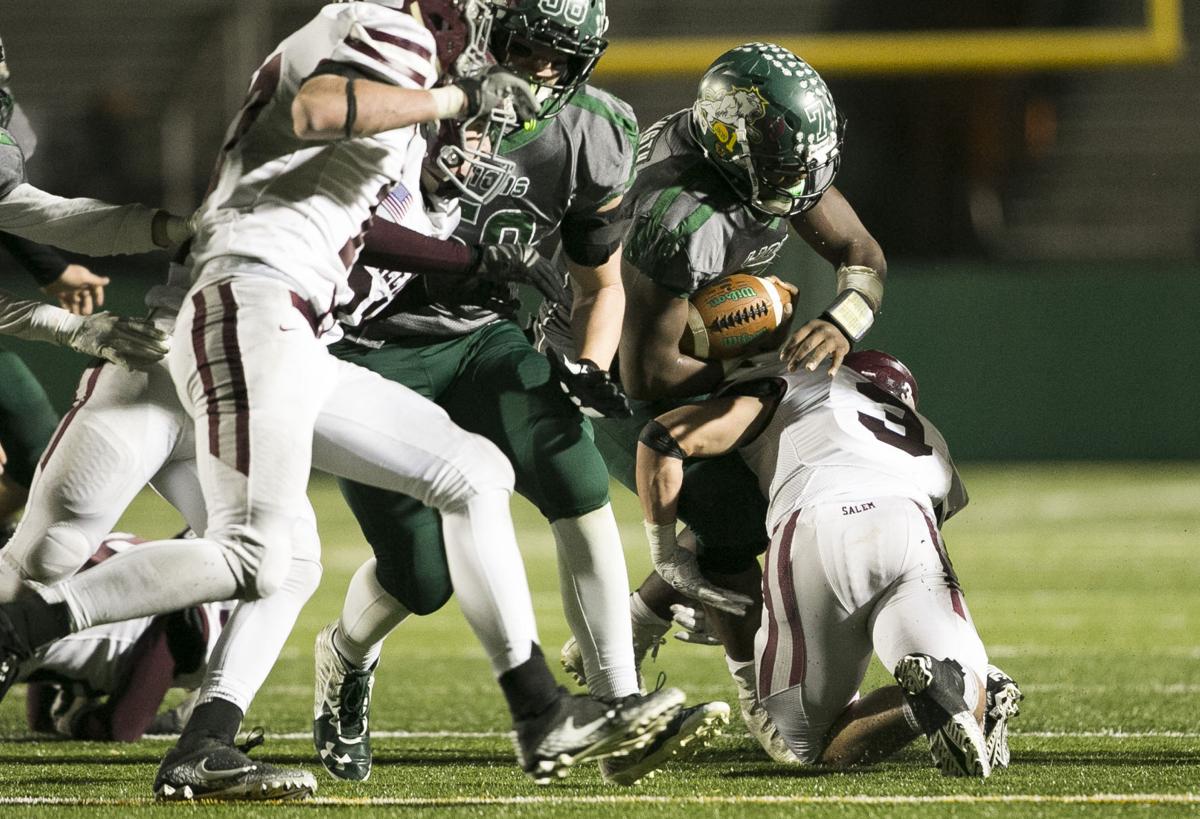 Louisa’s Malik Bell is stopped short of a first down late in the 2017 VHSL Class 4 state championship. The loss denied the Lions a perfect season

Louisa head coach Mark Fischer hugs Dusty Matney following the Lions’ 43-22 loss to Salem in the VHSL Class 4 state championship in 2017. It was Fischer’s last season with the Lions.

Louisa’s Malik Bell is stopped short of a first down late in the 2017 VHSL Class 4 state championship. The loss denied the Lions a perfect season

In the heat of July, the 2017 Louisa Lions were already making plans for the cold of autumn.

At a preseason camp at Hampden–Sydney College, “we really came together,” said Malik Bell, the quarterback of that team. “We decided we were going to have Thanksgiving dinner with each other.”

That meant an extended playoff run. And the Lions—The Free Lance–Star’s 2010-19 team of the decade—went even further, staying unbeaten until sustaining a 43–22 loss to Salem in the Virginia High School League Class 4 state championship game in early December.

In fact, if not for a disputed official’s spot on a fourth-down run by Bell, the talented and motivated Lions (14–1) might have gotten to celebrate the first state championship in school history.

Louisa already had plenty of incentive. Before the season, coach Mark Fischer revealed that the multiple myeloma, a rare form of cancer he had been battling for over a decade, had returned, and that 2017 would be his final season as coach. He died in February 2019.

“The players really took to dedicating that season to coach,” said current head coach Will Patrick, the team’s offensive coordinator that season. “They all watched him battle. There were weeks when he would miss practice, but he always showed up on Friday nights. He was a real inspiration for the kids.”

Fischer’s health was the only real adversity the Lions face during an unbeaten regular season. They won each game by at least two touchdowns and outscored their overmatched foes by a combined 485–145.

When the playoffs arrived, though, Louisa’s resilience was tested.

At halftime of a bitterly cold first-round game, Louisa trailed the same Courtland team it had routed 41–7 in its opener. The Lions adjusted, rebounded and rolled to a 35–13 victory.

A week later, Raquan Jones’ interception late in the first half turned the momentum as Louisa rallied past Monacan, which had ousted the Lions from the 2017 playoffs.

Narrow victories over Dinwiddie and Lafayette earned the Lions a spot in their first state final since 2006.

Facing Salem at William & Mary’s Zable Stadium, they fell behind 28-6 early in the third quarter, but got touchdown runs from Bell and Job Whalen and were driving again when they faced fourth down and 4 at the Salem 24 midway through the fourth period.

Bell kept the ball and ran behind all-state lineman Tony Thurston, but was ruled to have been stopped by Salem’s Joseph Quinn inches short of a first down, despite the Lions’ protests that he had gained the necessary yardage. On the next play, Salem’s DeAngelo Ramsey dashed 79 yards for a title-clinching touchdown.

“From my perception, [Bell] gets it all day,” Patrick said of the fourth-down keeper, “but from the referee’s vision, he didn’t make it. ... If he gets the first down, we win the game.”

The 2017 Lions had plenty of headliners, led by junior linebacker Brandon Smith, who was named state player of the year in 2018 before signing with Penn State. Thurston is now on scholarship at James Madison, Whalen at Virginia–Wise. And Bell recently transferred from Virginia Tech to Division II Virginia Union.

“We had a lot of stars, but we also had a lot of other kids who made big contributions,” Patrick said “To me, that’s what makes high school football what it is. Maybe they didn’t get the glory, but we couldn’t have won without them.

“Everyone knew their job and performed to the best of their ability. Even when things weren’t going good, they buckled down and found a way to will themselves to victory. That was the reason that was a special team. There were a lot of different personalities, but they all wanted to win.”

Said Bell: “Although [the season] didn’t end the way we wanted it to, it was humbling to realize we accomplished almost everything we set out to do.”