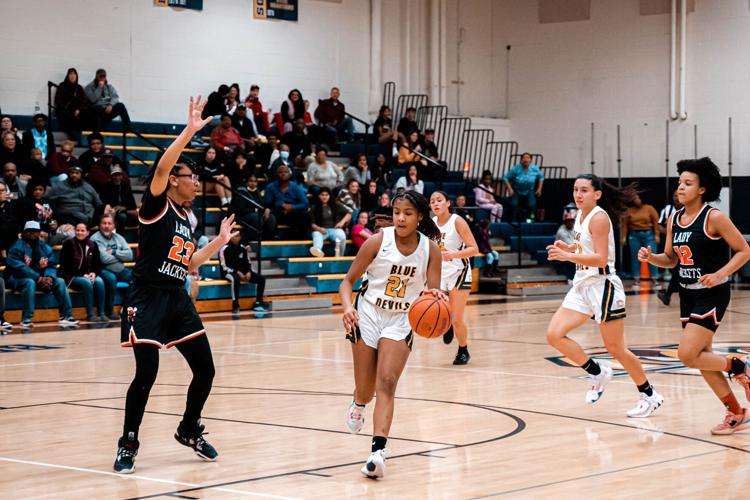 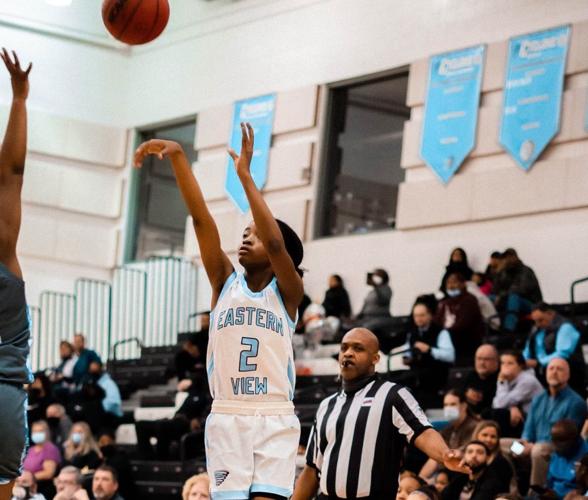 Eastern View’s Ange Hyonkeu received first-team All-Battlefield District honors after leading the Cyclones in scoring with 15.5 points per game during her freshman season.

Like their counterparts in other sports, the girls basketball teams at Culpeper and Eastern View always anticipate playing each other. Crosstown rivalries have a way of creating that anticipation, given the age-old prize of bragging rights goes to the victor.

But, hyperbole excused, Tuesday’s matchup between the two squads may be the biggest in the 14-year history of the rivalry.

The Blue Devils (11-2 overall, 6-0 district) and Cyclones (11-0, 6-0) have both cut a swathe through Battlefield District competition this season. Culpeper’s average margin of victory against district opponents is 24 points, while Eastern View’s is 29.5.

The dominance of both teams has led to a showdown at 5:30 p.m. Tuesday at EVHS that will break a first-place tie and set the tone for the second half of the district schedule.

The Cyclones are used to these high-pressure situations—they’re the defending district and Region 4B champions, and they’ve also qualified for the Class 4 state tournament three times in the past five years.

The Blue Devils, however, haven’t enjoyed a winning season since 2017-18, which, ironically, was also the last time they defeated their rivals.

“The girls deserve a lot of credit for how well they’re playing,” first-year Culpeper head coach Corey Hutcherson said. “They’ve turned things around, and they’re very excited and ready to play this game.”

A big part of the Blue Devils’ success has been the play of freshman guard Amyah Robinson, who’s been on a roll as of late.

Robinson scored nine of her 22 points in the fourth quarter to help Culpeper hold off Chancellor, 58-55, for its 10th win in a row Friday night. She added 21 in a 58-49 victory over Courtland last Tuesday and lit up the scoreboard for 33 in a 78-56 rout of James Monroe on Jan. 6.

“You wouldn’t know she’s a freshman by watching her play,” Hutcherson said of Robinson. “She’s been playing like a big-time senior.”

The Blue Devils aren’t a one-woman show, though.

Senior forward Autumn Fairfax is a four-year starter who creates matchup problems with her athleticism and 6-foot-2 frame. She scored 20 points against Chancellor and poured in 32 against JM.

Robinson and Fairfax are both averaging 20 points per game, but sophomore guard Kelley Hutcherson has also stepped up as of late, tallying 16 against Chancellor and 18 against Courtland.

“She’s a sharpshooter,” Hutcherson said of Hutcherson, who sank a pair of big 3-pointers against Chancellor.

Hutcherson said he believes his squad’s keys to success Tuesday will be winning the rebounding battle and creating easy scoring opportunities in transition against a Cyclones team that’s extremely stingy on defense.

Eastern View is allowing a meager 26.7 points per contest, and has only allowed more than 27 points on three occasions this year.

“We pride ourselves on playing as a team,” McCombs said. “And that’s what it’s going to take to beat [Culpeper], a complete team effort."

Sophomore guard Ange Hyonkeu, who was instrumental in the Cyclones’ run to the state quarterfinals a season ago, has picked up where she left off. She scored 15 points in Friday’s win over Courtland and 12 in a 55-27 shellacking of King George last Tuesday.

“She’s our scorer,” McCombs said of Hyonkeu. “She sets the tone for us offensively.”

“Having players with several years of varsity experience makes a difference,” McCombs said. “Both Destiny and Saniya are in their third year on the varsity level, so they know what’s expected of them and they’ve been in these big games before.”

Eastern View’s winning streak over Culpeper currently sits at eight games. The Blue Devils’ last win in the series was a 39-34 triumph on Dec. 8, 2017.

After nearly a three-month search, Culpeper High School has found its next head football coach.

Eastern View’s Ange Hyonkeu received first-team All-Battlefield District honors after leading the Cyclones in scoring with 15.5 points per game during her freshman season.