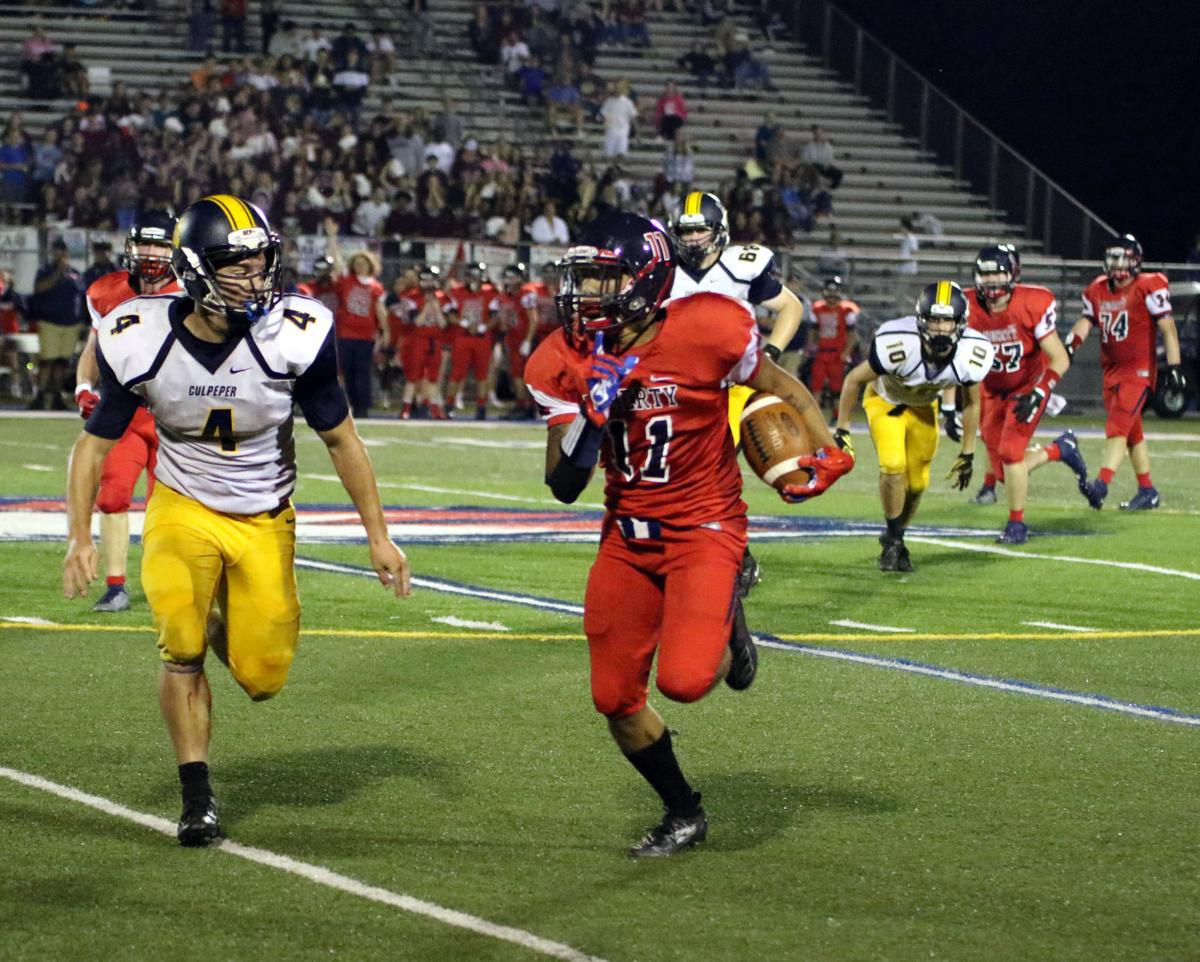 Culpeper’s Riley Harrison (left) chases down Liberty’s Justin Lawson during a game in Sept. 2019. Harrison was named second-team all-region 4C after registering 111 tackles as a junior. 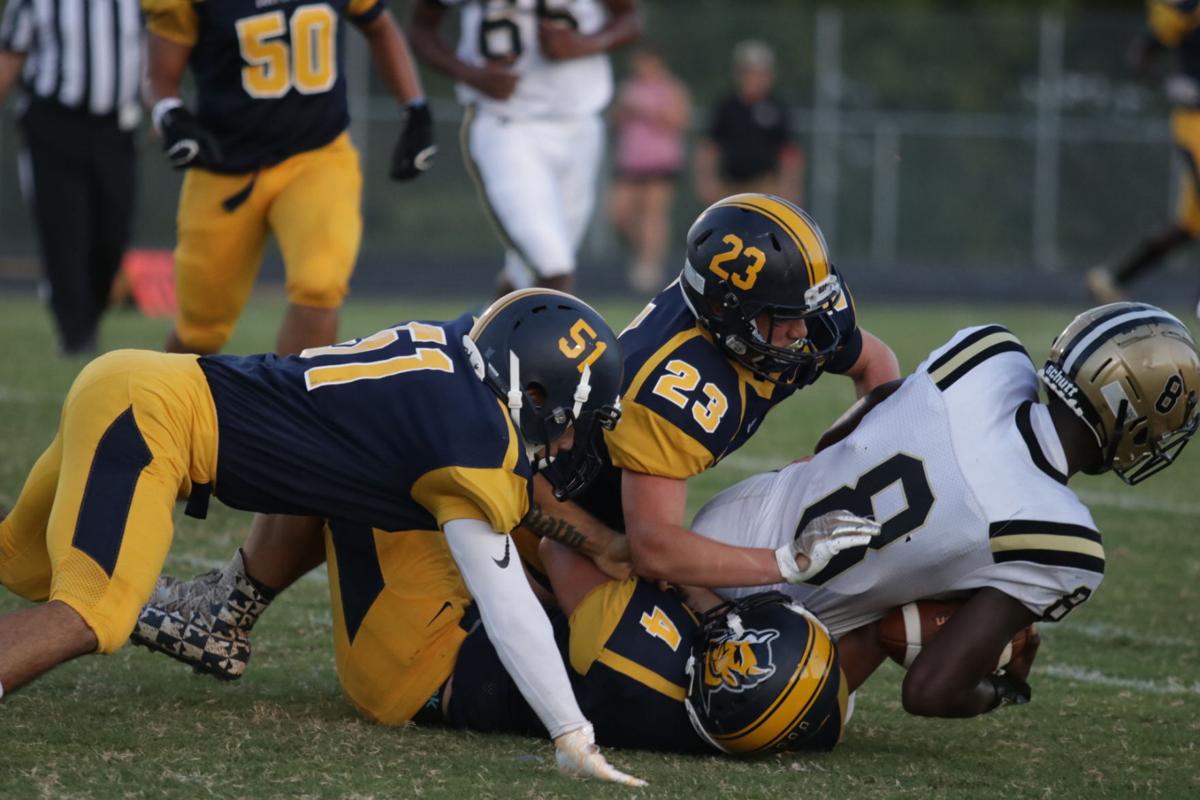 Culpeper’s Joe Lombay (51), Austin Lentz (23) and Riley Harrison (4) bring down Monticello’s Malachi Fields (8) during a game in Sept. 2019. Harrison is a three-year starter at linebacker for the Blue Devils. 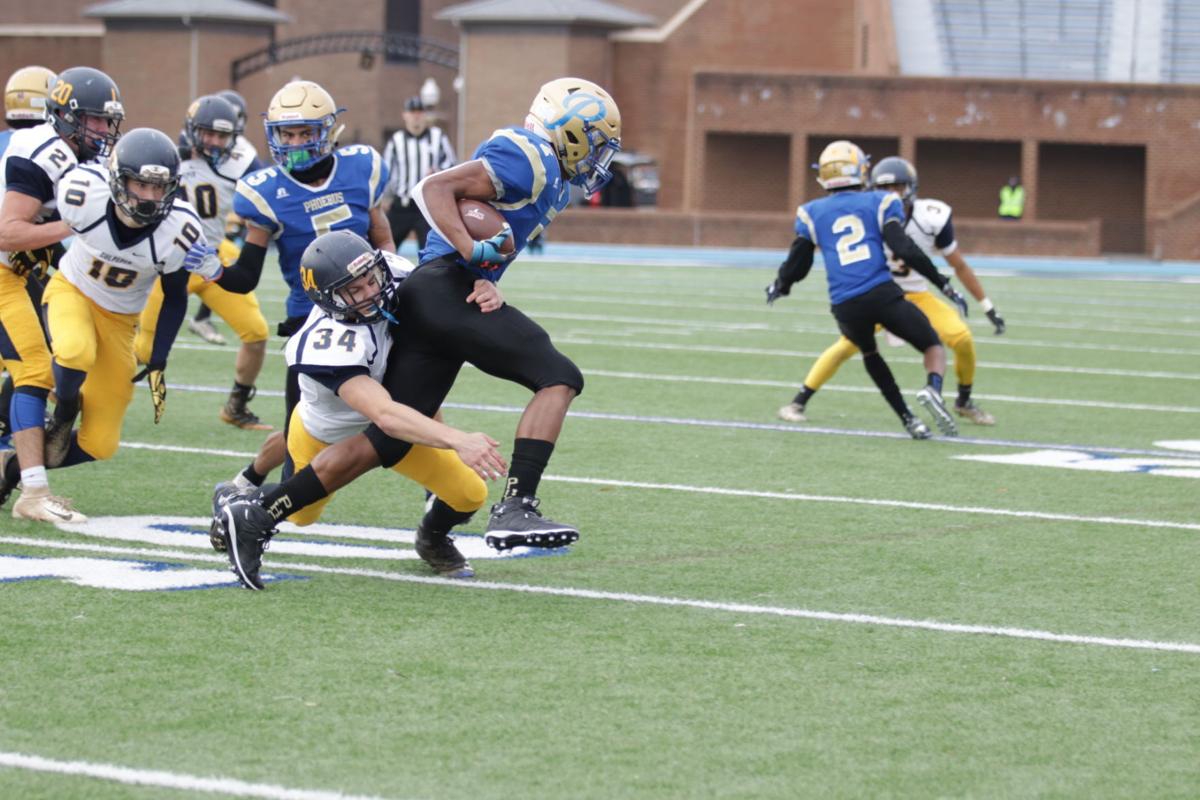 With the Culpeper football team clinging to a slim lead late in the third quarter of a game against visiting Monticello last season, Riley Harrison saw an opportunity to give the Blue Devils some breathing room.

Reading the eyes of Mustangs quarterback Malachi Fields from his linebacker spot, Harrison stepped in front of a pass attempt by the University of Virginia commit and returned an interception 13 yards for a touchdown.

Harrison’s big play gave Culpeper a 16-6 advantage at the time and ultimately broke Monticello’s back in a 30-6 Blue Devils victory—their only notch in the win column in 2019.

But even as Culpeper struggled to compete with a schedule full of bigger schools during its first year in the Class 4 Northwestern District, Harrison’s efforts were a constant bright spot.

Where opposing ball carriers went, Harrison followed like a heat-seeking missile. He amassed a team-high 111 tackles (10 for loss), as well as two sacks, a pair of forced fumbles and a fumble recovery to go along with the interception.

Harrison didn’t limit himself to just dishing out punishment though.

Described by his coaches and teammates as an “old school” type of player who thrives on the game’s physicality, Harrison enjoys taking big hits almost as much as he does handing them out. As a result, he rushed for 752 yards and two scores to lead the Blue Devils’ platoon of running backs, churning up real estate at nearly six yards per attempt.

“Riley did whatever we asked of him,” former Culpeper defensive coordinator and interim head coach Brandon Utz said. “And he did it well and with maximum effort at all times. He’s always the first guy to throw himself into the fire for the good of his team.

“I love that kid,” Utz added, brandishing a wide grin.

Assuming Virginia high school football kicks off in February as planned, Harrison will embark on his third season as a varsity starter. He attributes his longevity and performance to a mindset he adopted long ago.

“In this game, you’ve got to have that mental and physical toughness,” Harrison, now a senior, said. “You can’t be afraid to take a hit, period.”

Blue Devils head coach James Ford was quick to point out that there’s a lot more to Harrison than his toughness, however.

“He has a natural feel for the game and a nose for the ball,” Ford said. “He diagnoses plays well and is able to get to the ball carrier. Once he gets there, he displays great strength and leverage.”

Despite his accomplishments on the field, Harrison is still relatively fresh on the radars of many colleges. Thus far, he’s received offers from a pair of Division III schools in Hampden-Sydney College and Shenandoah University.

Ford said he believes colleges have been slow to take notice of Harrison due to his size—he measures just under 5-foot-10 and weighs 210 pounds.

“He might not check all the boxes, particularly for height, but his effort and willingness to compete and learn is unmatched,” Ford explained. “When you add in his excellent instincts and leadership skills, all of that negates the question of size.”

In the meantime, Harrison continues to grind away at his craft.

“No matter what level you’re at, you always have to be studying film so you can be prepared for what your opponent is going to do,” Harrison said.

Then, after a pause, Culpeper’s tough-as-nails leader offered a very cerebral take on what his real strength is as a player.

“I pride myself in my football knowledge and vision,” he concluded. “I feel like I usually know who’s going where.”

Ford knows where Harrison is going.

“Someone is going to take a shot on him at the next level,” Ford said. “And whoever does is going to get a gem.”

For months, football players and coaches at Woodberry Forest have followed strict COVID-19 protocols. The hard work was rewarded Friday as the school announced a shortened fall season, which will start next Saturday.

Culpeper’s Riley Harrison (left) chases down Liberty’s Justin Lawson during a game in Sept. 2019. Harrison was named second-team all-region 4C after registering 111 tackles as a junior.

Culpeper’s Joe Lombay (51), Austin Lentz (23) and Riley Harrison (4) bring down Monticello’s Malachi Fields (8) during a game in Sept. 2019. Harrison is a three-year starter at linebacker for the Blue Devils.