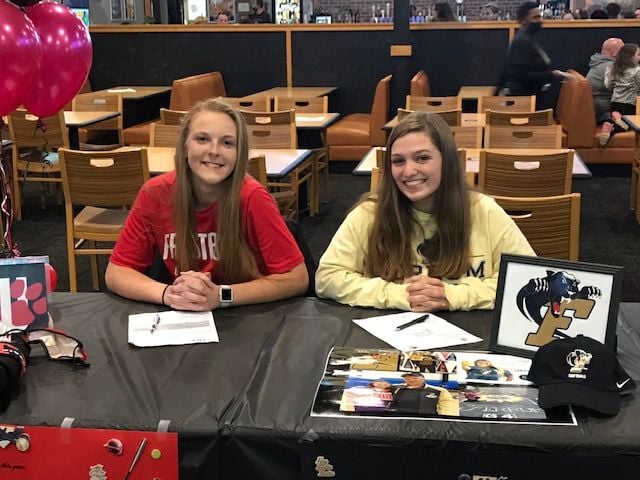 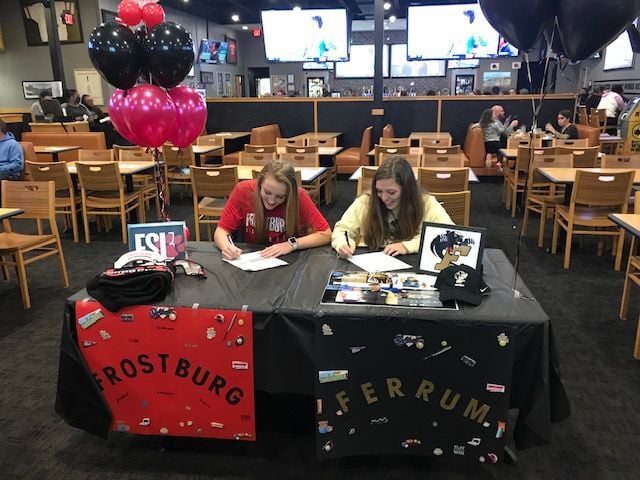 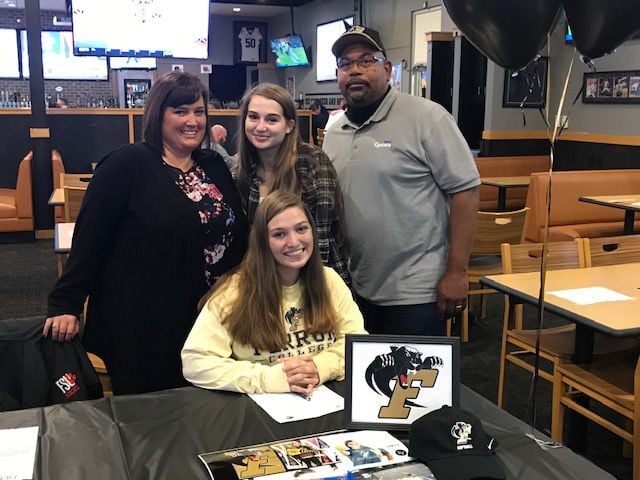 Macey Moore, above, and Des Scott, below, are surrounded by family during a signing ceremony at the Buffalo Wild Wings Culpeper location on Thursday. 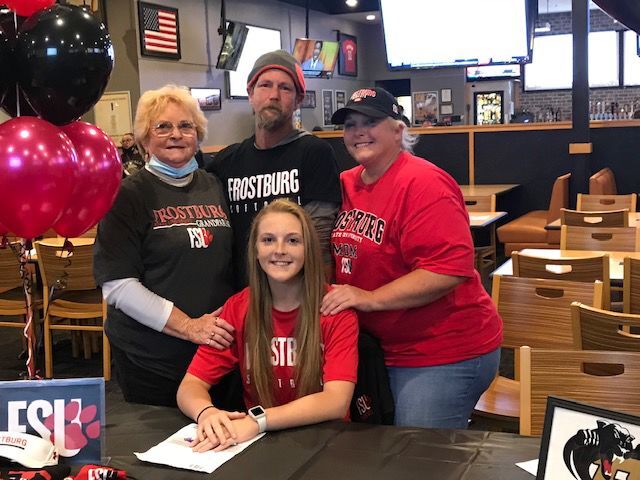 Des Scott, seated, is surrounded by (from L-R) her grandmother, Carolyn Cox; father, Raymond Scott, and mother, Candice Combs, during a signing ceremony at the Buffalo Wild Wings Culpeper location on Thursday, Nov. 19, 2020.

Having played together for years, it was only fitting that Eastern View High School softball players Macey Moore and Des Scott decided to celebrate their college decisions together as well.

The two seniors did just that at a makeshift signing ceremony held at the Culpeper Buffalo Wild Wings location Thursday night.

Tiffany Pollard, Moore’s mother, wasn’t going to allow the pandemic, which already robbed Moore and Scott of their junior softball season last spring, to cost them the well-deserved ballyhoo that comes with a student-athlete making their college destination official. To that end, she organized Thursday’s event.

“We wanted to come together to celebrate these girls and how hard they’ve worked,” said Tiffany Pollard, Moore’s mother. “We’re all so thrilled for both of them.”

Moore, a Ferrum College commit, and Scott, a Frostburg (Md.) State University signee, sat at a table decked out with memorabilia from both schools in a cordoned-off section of Buffalo Wild Wings’ dining area. They were joined by an enthusiastic group of family and close friends, with many of them snapping photos and a few streaming the happening on Facebook Live.

After attending a camp at Ferrum last year and then taking a tour of the campus prior to the pandemic, Moore said her mind was pretty much made up about committing to the school, which competes in the Division III Old Dominion Athletic Conference.

“Everyone was so welcoming there,” she said. “It didn’t take long for me to fall in love with the place.”

Moore played both catcher and first base for Eastern View’s varsity team as a sophomore in 2019, but said Ferrum has indicated it plans to play her at the former once she arrives on campus.

“It’s going to be an adjustment for sure, moving from high school and travel ball to college ball,” she added. “But I think the work I continue to put in and the competition I’ve faced, especially during travel, has prepared me well for it.”

“I’m very proud of her,” Pollard said of her daughter, who hopes to one day become a teacher. “And I’m so glad she chose Ferrum, because they have a great elementary education program.”

Scott, who was a first-team all-Battlefield District selection while rotating between multiple positions for the Cyclones in 2019, took her first visit to Frostburg’s campus over a year ago.

“I liked how small the campus was,” Scott said. “Then I really fell in love with the softball program, so it became an all-around perfect fit.”

Frostburg joined the Division II Mountain East Conference prior to the 2019-20 athletic year, ending a 41-year run as a Division III institution.

“She studies hard, she gets good grades, and she practices and plays just as hard,” Scott’s mother, Candice Combs, said. “She puts a ton of hours in, both at school and softball, and she knows she has to work hard for whatever she wants.”

With their college picks now locked in, Moore and Scott both said they’re looking forward to one last season at Eastern View, which just missed qualifying for the Region 4B tournament in 2019.

“We felt like we had the kind of team that could compete for a district championship and beyond last year, but we didn’t get that chance because of this virus,” Moore said. “We’ve still got plenty of talented players coming back for this season though, so we have lofty expectations.”

“The group of girls we have at [Eastern View] has been playing together for a long time, from Little League and up really,” Scott added. “We expect to go out on a high note.”

Like just about everything so far in 2020, Alexus Thomas’ college decision took somewhat of a wait-and-see approach.

Governor Ralph Northam gave the go-ahead for the VHSL to proceed with its Championship + 1 schedule Thursday when he signed the fourth amendment of Executive Order, which included changes with regards to recreational sports.

Macey Moore, above, and Des Scott, below, are surrounded by family during a signing ceremony at the Buffalo Wild Wings Culpeper location on Thursday.

Des Scott, seated, is surrounded by (from L-R) her grandmother, Carolyn Cox; father, Raymond Scott, and mother, Candice Combs, during a signing ceremony at the Buffalo Wild Wings Culpeper location on Thursday, Nov. 19, 2020.