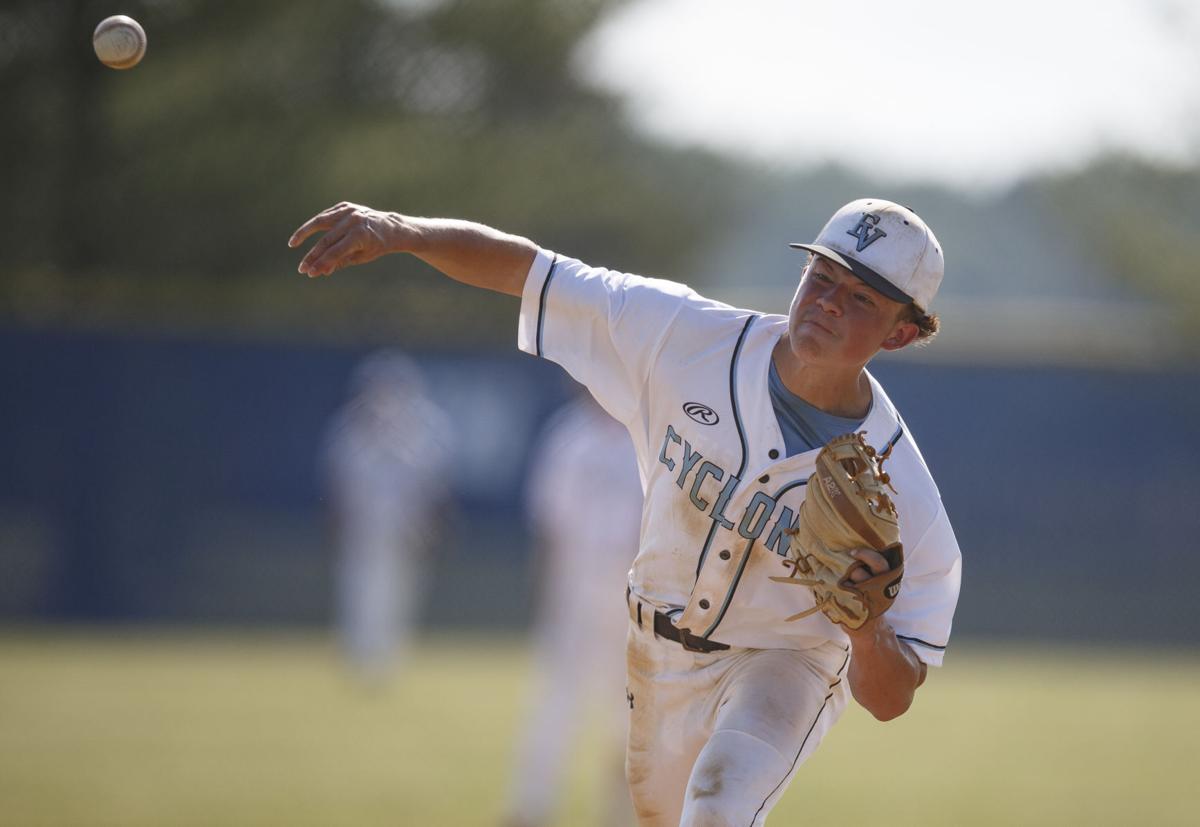 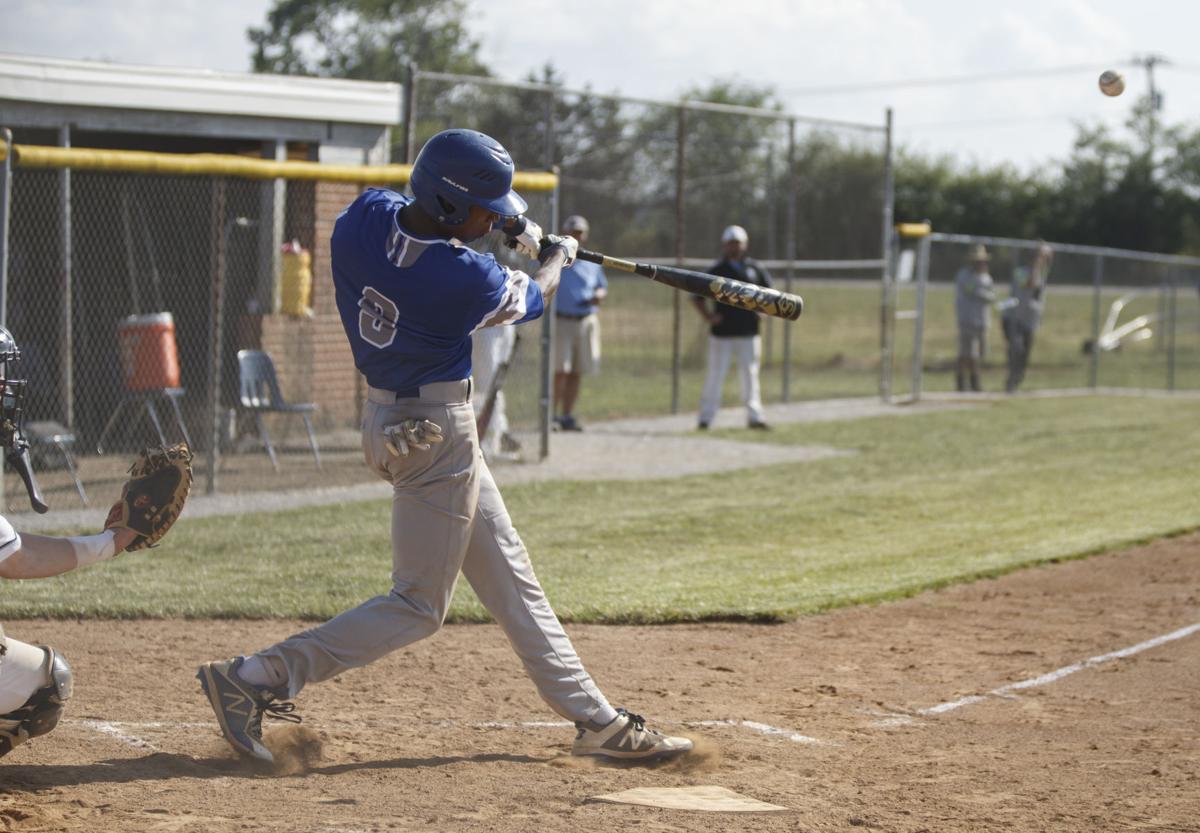 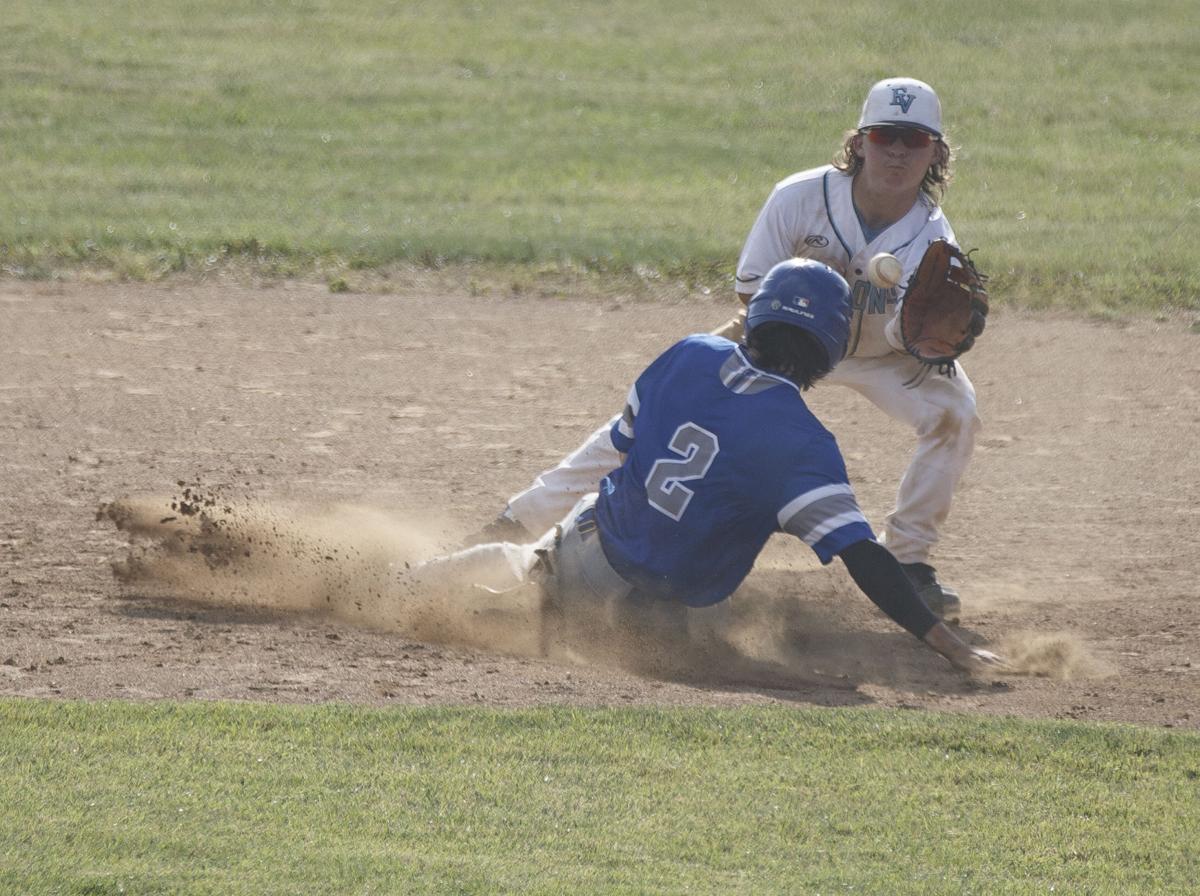 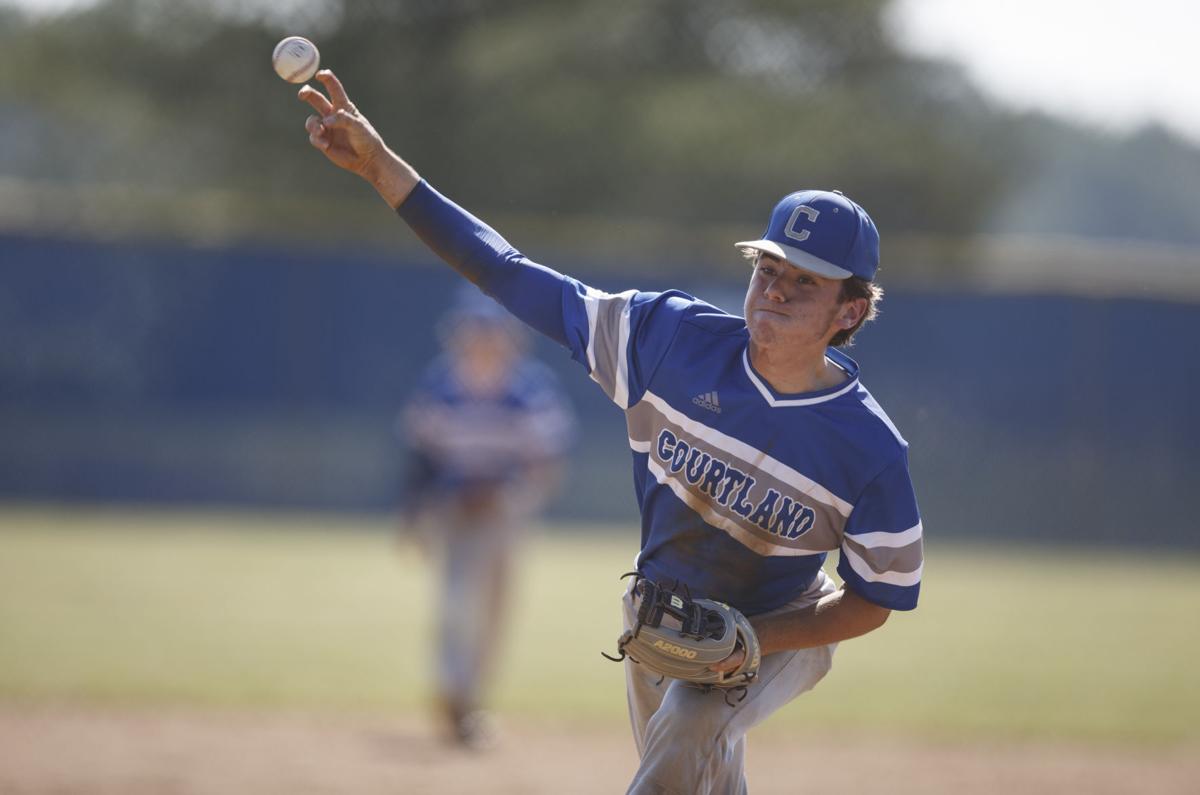 Courtland’s Matthew Caiafa had the rare honor of both starting a suspended game and pitching in relief. 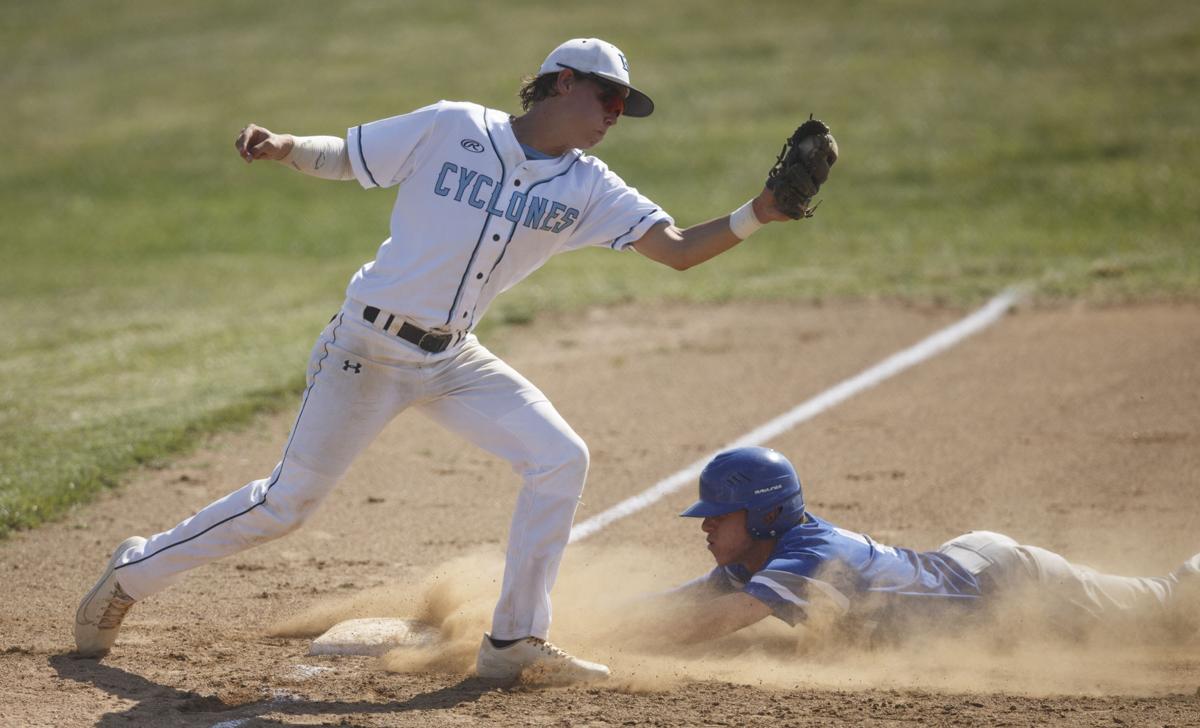 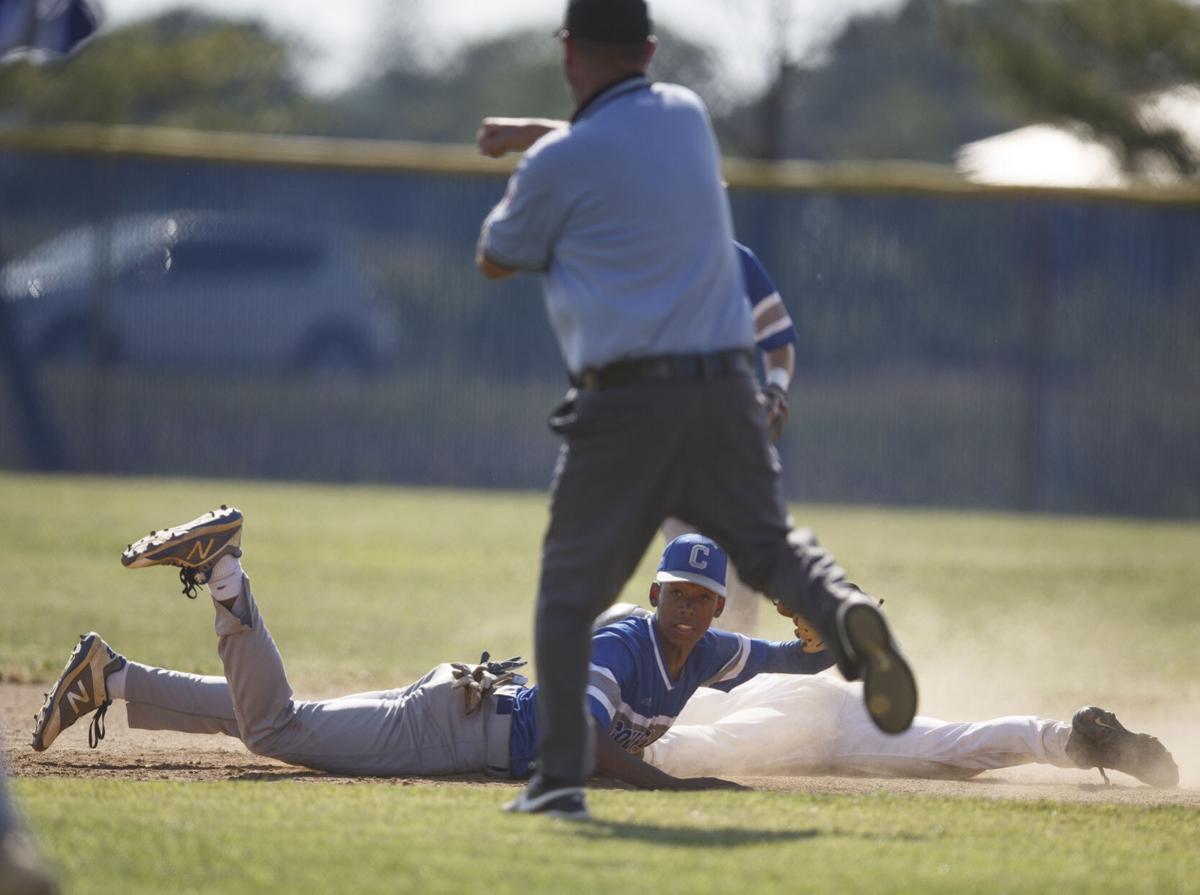 Courtland's Christian Jones looks for the call after making a play at second base against Eastern View in Spotsylvania, Va. on Monday, June 7, 2021.

By STEVE FRANZELLO FOR THE FREE LANCE-STAR

When play resumed in the top of the third at Courtland High School, Cougars coach Tim Acors was beginning to wonder if his team had failed to show up.

“Mondays can sometimes be challenging after the weekend,” Acors said. “But we took infield and outfield before the game and looked pretty good. But then after that first at-bat, it was like, ‘Where did my team go?’ ”

It didn’t take long for the veteran coach to get his answer. First baseman Trey Burton’s two-run triple ignited a six-run explosion by the Cougars in their half of the frame and Courtland (9–1) pulled away for a 10–5 victory, its seventh straight win.

The Cougars have two games remaining in the regular season. They visit Caroline on Tuesday and host Chancellor on Thursday. A victory in either of those games clinches a berth in next Monday’s Region 4B playoffs. Chancellor and King George are two other Battlefield District squads still in the hunt for one of the four regional playoff spots.

“Our chemistry is crazy right now,” said Burton, one of only three seniors on the Courtland roster. “I like how we bounced back and I love playing with these guys.”

One of the other seniors, Christian Jones, was the starting pitcher on Friday and then saw duty on the mound again Monday in relief of Matthew Caiafa. Jones feels the Cougars have the talent and teamwork to make some noise in the final part of the pandemic-shortened season.

“We weren’t together last year, but this group has been together for a long time,” Jones saud. “I know for a fact that every single one of these guys is as hungry as I am.”

That desire was evident against the Cyclones, especially in the bottom of the third after Eastern View had done its damage. The Cougars sent 11 batters to the plate and five of them collected hits.

In the bottom of the fourth and the sixth, they added insurance runs. Jones drove in a pair of tallies in the fourth with one of his two hits on the night. In the sixth, catcher Brendan Ruckle and pinch hitter Cole Bruce each doubled and scored.

“They’re resilient and they don’t panic,” Acors said. “One of the things that has suffered because of this short season is teaching. But these guys have grown a lot. They’ve learned things as they’ve happened.”

Jones and Caiafa combined for 10 strikeouts in the game. Jones fanned three batters on Friday and then struck out four more on Monday. Caifa recorded three strikeouts in his two innings of work.

“It was a little weird [pitching in the same game as a starter and a reliever], but I was ready today because coach had told me that I might come in and pitch,” said Jones. “It was already in my mindset.”

Hackley was the only Eastern View player with more than one hit. In addition to his RBI double in the third, the first baseman smacked a run-producing triple to left in the top of the sixth.

“We came out hitting but the errors hurt us,” Cyclones first-year coach Collin Tucker said. “We’re young and we haven’t played a lot this year because of the COVID, but we’ll be all right.”

Eastern View (3–7) concludes its season with home games against Spotsylvania on Tuesday and Caroline on Thursday.

Acors believes the Cougars are ready to embrace the challenges of the week ahead and the playoffs if they make it that far, just as they’ve done all year.

“They’ve been through a lot, but they’re still eager and they love the game,” said Acors. “We’re two weeks removed from school and these guys are still showing up every day at 6:45 for practice.”

Why is there still so much doubt surrounding the Atlanta Hawks?

What does Joel Emiid's offseason look like following his knee injury?

What does Joel Emiid's offseason look like following his knee injury?

What are some ways the game of golf can grow?

What are some ways the game of golf can grow?

Syrian boxer competes 'for all refugees' at Olympics

Syrian boxer competes 'for all refugees' at Olympics

When the girls lacrosse teams at Culpeper and Eastern View high schools opened the 2021 season against each other on April 29, they couldn’t h…

Like all good things, Greg Hatfield knew his wildly successful tenure as Eastern View High School’s head football coach would come to an end one day.

Over the past two years, Culpeper High School wrestler A.J. Marshall has been able to pin just about every challenge that’s come his way to the mat.

Courtland’s Matthew Caiafa had the rare honor of both starting a suspended game and pitching in relief.

Courtland's Christian Jones looks for the call after making a play at second base against Eastern View in Spotsylvania, Va. on Monday, June 7, 2021.