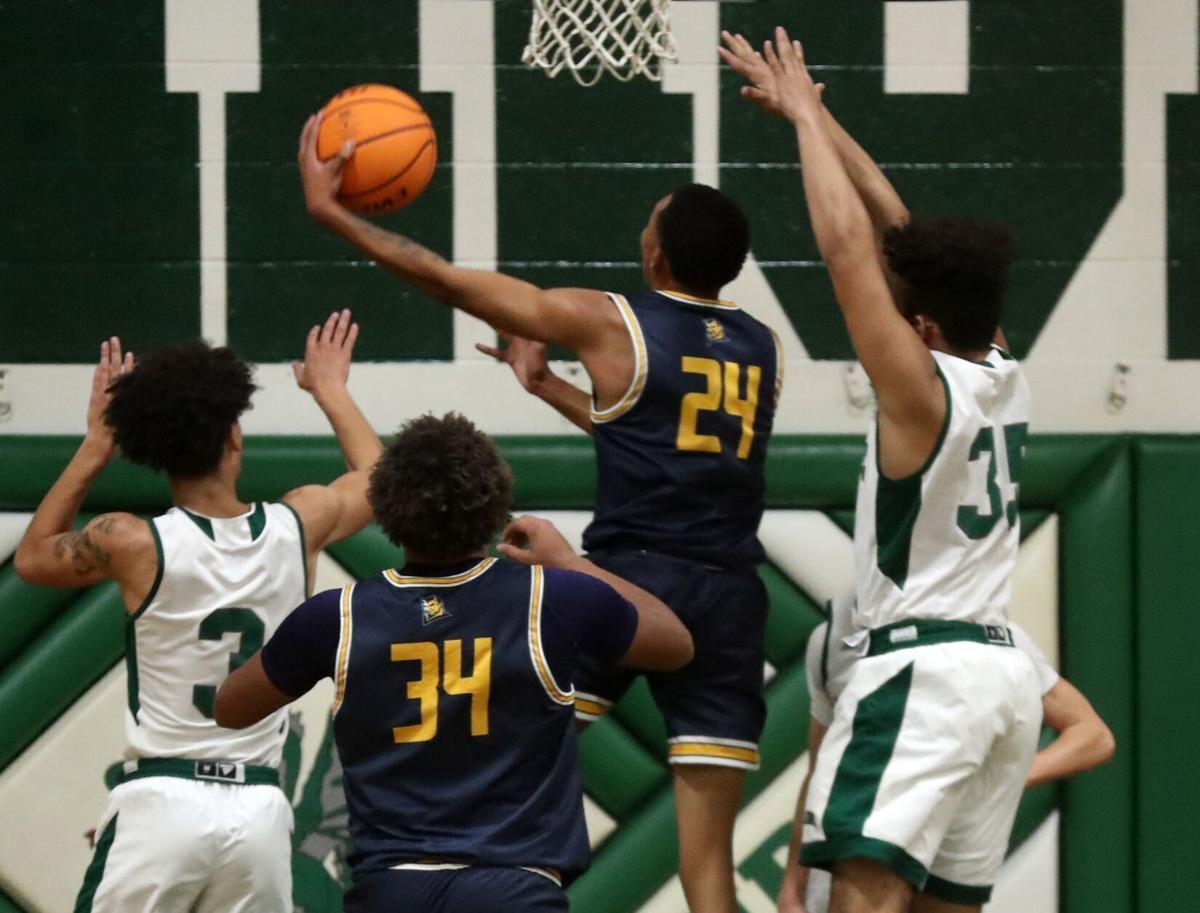 Culpeper’s Chase Smith (24) goes up to score between William Monroe defenders Logan Barbour (3) and Joshua Johnson (35) during the Blue Devils’ season opener in Stanardsville on Dec. 21. Smith, a senior, is one of only four returning players from last year’s team. 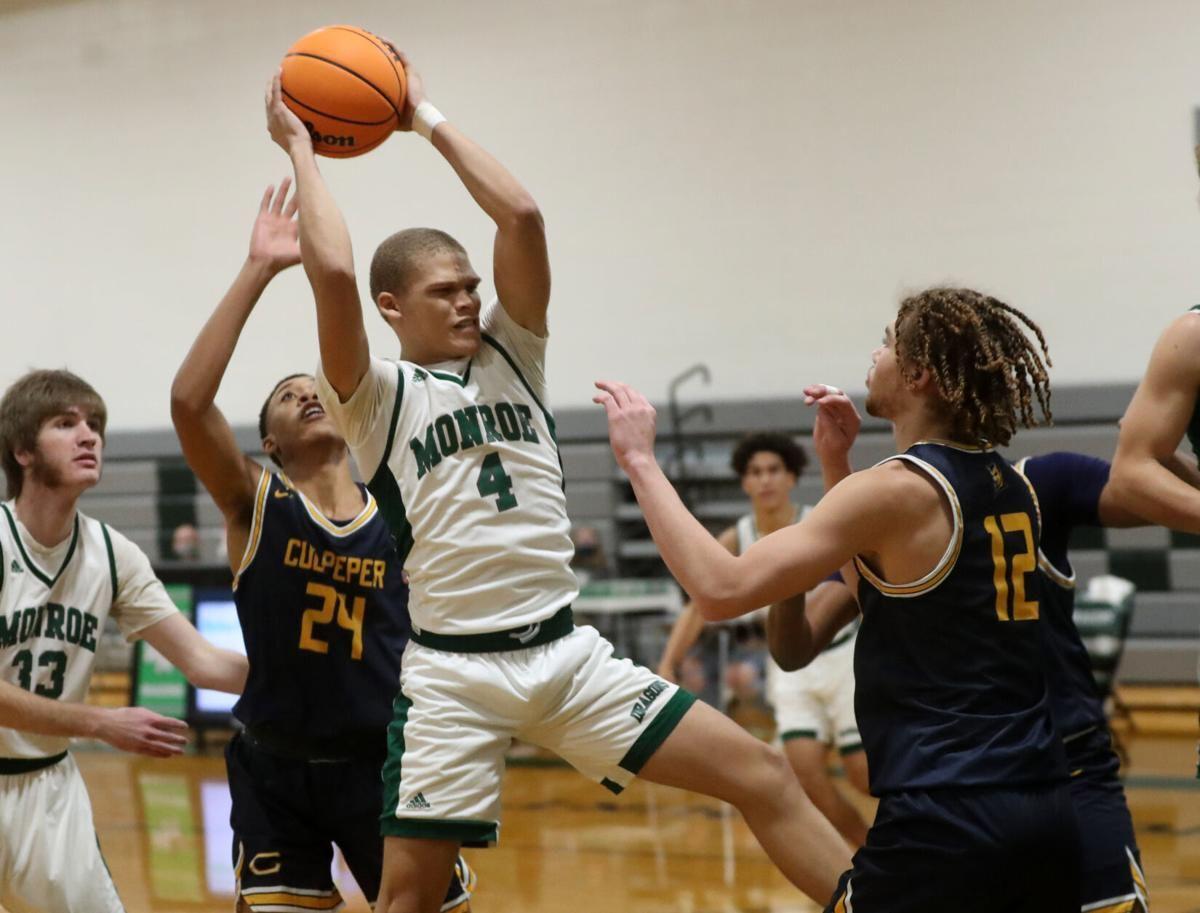 As the Culpeper boys basketball team struggled to a 6-16 record last season, a familiar refrain among Blue Devil fans was how promising the 2020-21 campaign looked with all of the young players that were expected to return.

Unfortunately for Culpeper and its enthusiasts, the chaos and rampant unpredictability of 2020 didn’t leave the roster unscathed.

As the Blue Devils attempt to get the new season off the ground, they’re doing so without a handful of players that were expected to be tentpoles in veteran head coach James Thompson’s rotation this winter.

Four returnees opted out of suiting up for Culpeper: seniors Cameron Cropp and Reece Reynolds and juniors DeQuan Thompson and Eli Williams.

The loss of that quartet, in addition to the graduation of all-Region 4C performer Dejour McCray, has transformed the Blue Devils from what would have been a veteran squad with the potential to make some noise in the Class 4 Northwestern District to a unit that will rely heavily on contributions from inexperienced players for the second year in a row.

“You can prepare for the graduation losses,” Thompson said. “As tough as it is to swallow, we knew Dejour was moving on. But the unexpected losses, regardless of the reasons for them, can really catch you off guard.”

Cropp, Reynolds, Thompson and Williams were all seasoned performers who had experience playing key minutes for Culpeper.

“It’s just like losing four starters with the snap of a finger,” Thompson said of the group. “All of them started for us at various times in the past and knew what to expect in the heat of the moment out there, as well as what I was going to ask of them on a daily basis.”

Each of the four had their own reasons for choosing not to take the floor this season. Cropp prioritized school and work, Reynolds recently had knee surgery, and Thompson and Williams decided to focus solely on track and field and soccer, respectively.

“It’s tough to lose them, but I understand their reasons for opting out,” Thompson said.

While it may be a tad barren, the cupboard isn’t entirely empty for the Blue Devils.

Senior swingman JoJo Crenshaw returns for his fourth year at the varsity level, and Thompson noted that will be counted on heavily to pace the team’s scoring attack.

“JoJo’s been there and done that at this point,” Thompson said of the 6-foot-5 senior, who struggled with injuries last season but averaged 11 points and seven rebounds per game as a sophomore. “He knows we’re going to lean on him more than ever this year.”

Culpeper returns two other seniors in Chase Smith and Jaiden Penn. Penn will provide depth at both guard and forward, while Thompson said he’s hoping Smith will emerge in the backcourt as a scoring complement to Crenshaw.

Another returnee is 6-foot-5 junior forward Quentin Butler, a football standout who emerged as a threat around the basket for the Blue Devils as last season wore on.

“He has the size and ability to be a factor for us every night,” Thompson said of Butler, who led Culpeper in scoring with 13 points in its only game thus far—a 55-35 loss at William Monroe on Dec. 21. “He already had that big frame, but the amount of time he put in lifting weights during the offseason has taken his strength to the next level.”

The Blue Devils also figure to be buoyed to some degree by the addition of transfer guard Nathan Amos, who was one of the top players on Eastern View’s junior varsity squad a year ago.

“[Amos] is an impressive shooter, but he’s undergoing a little bit of a learning curve right now because I have him learning the point,” Thompson pointed out. “He’s used to that off-guard spot, and I’m throwing a lot at him right now. I think he’ll emerge better from it because having that versatility will make him a more complete player.”

Culpeper finds itself in a bit of a holding pattern at the moment. Following it’s season opener against William Monroe, a Dec. 28 home contest against Skyline was canceled due to COVID-19 concerns. Upcoming games with district foes Handley (Jan. 4), Kettle Run (Jan. 8) and Fauquier (Jan. 11), as well as a nondistrict tilt with James Monroe (Jan. 6), have all been shuttered for the moment as well, with the school systems that govern each of those teams all deadlocked in various states of indecision as to whether or not they will proceed with winter sports amid the recent uptick in coronavirus cases.

In the meantime, Thompson said he’s trying to remain upbeat and use the constant state of unpredictability to teach his players a valuable lesson.

“I’m trying to get the guys as many practice reps as possible so they stay engaged and positive,” he said. “But I also want them to look at the situation we’re all in right now and understand that life doesn’t revolve around sports. This entire year has been nothing but constant adversity, and they need to understand that it’s how you handle times like these that ultimately determines who you become in life.”

With over 1,000 points amassed in his career, Ricky Goode-Wright's scoring ability isn't exactly the best-kept secret in the Battlefield District.

Culpeper’s Chase Smith (24) goes up to score between William Monroe defenders Logan Barbour (3) and Joshua Johnson (35) during the Blue Devils’ season opener in Stanardsville on Dec. 21. Smith, a senior, is one of only four returning players from last year’s team.