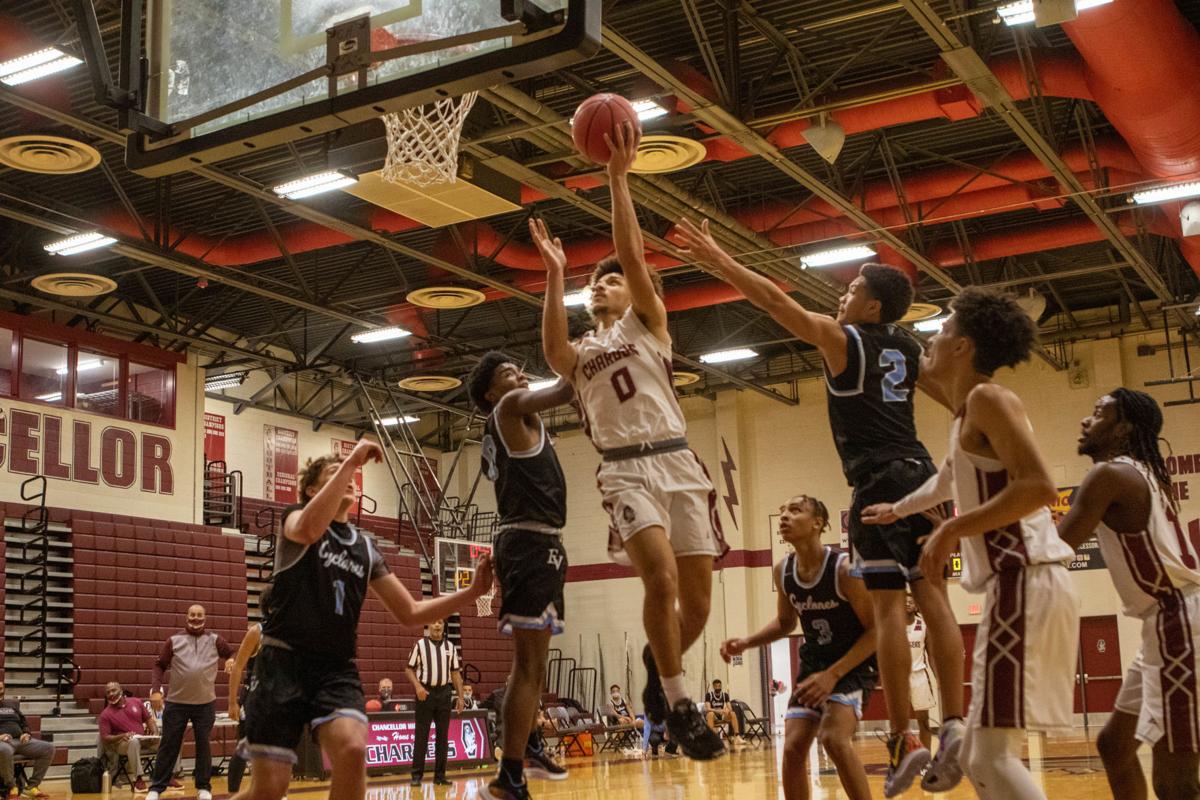 Chancellor’s Shane Batten (0) goes up for two of his game-high 29 points against Eastern View Friday night. The host Chargers won the game 74-59. 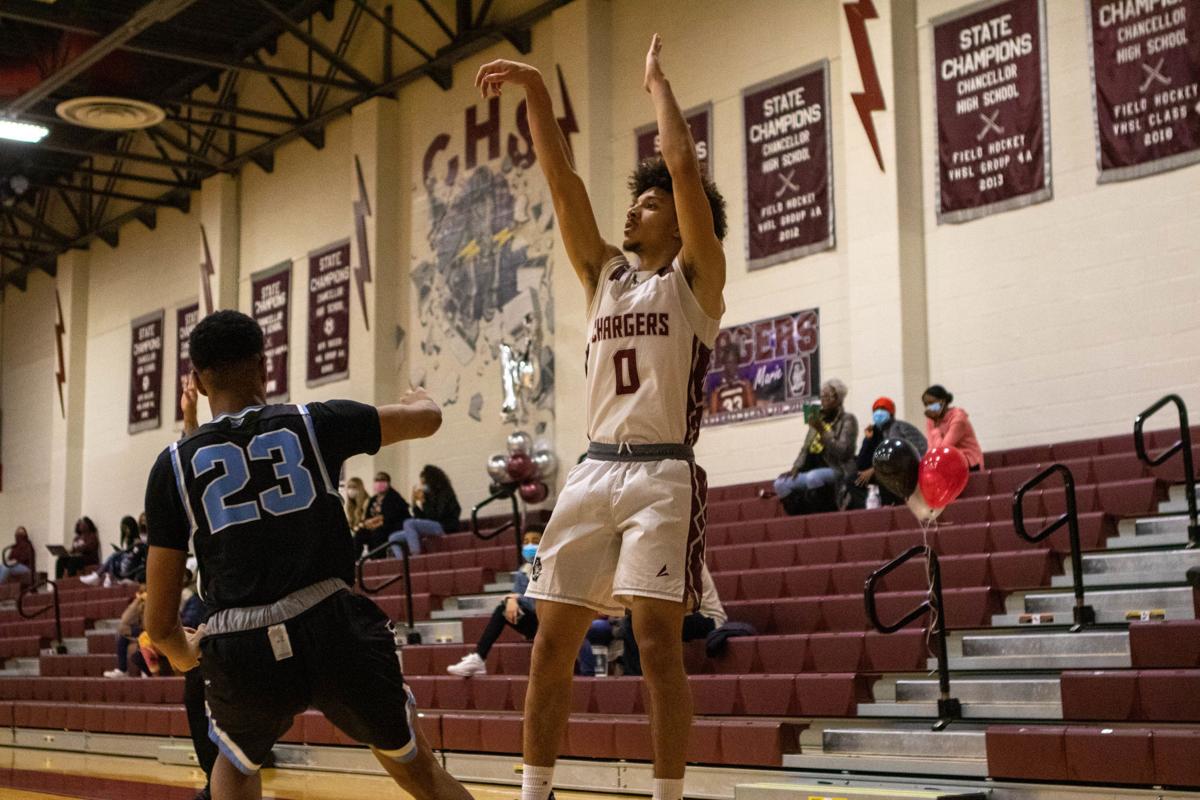 Chancellor’s Shane Batten (0) makes one of his six 3-pointers on the night as Eastern View’s T.J. Coles looks on. 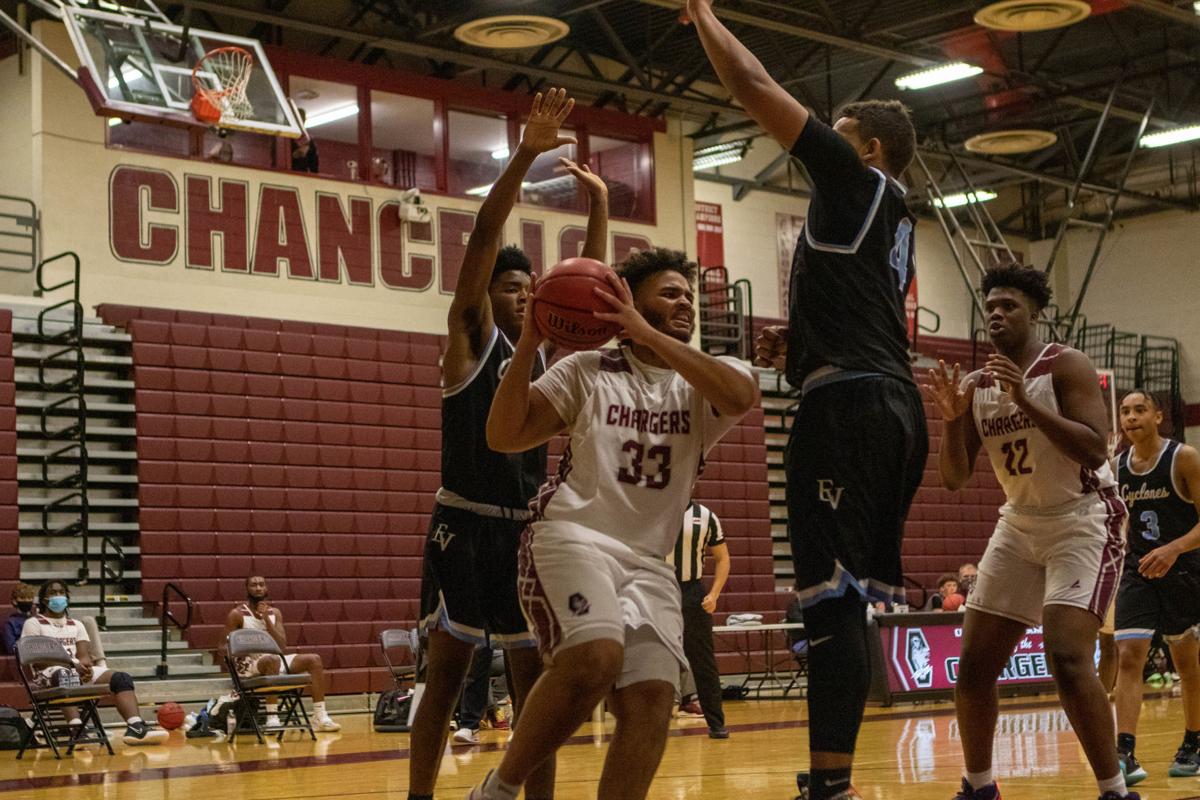 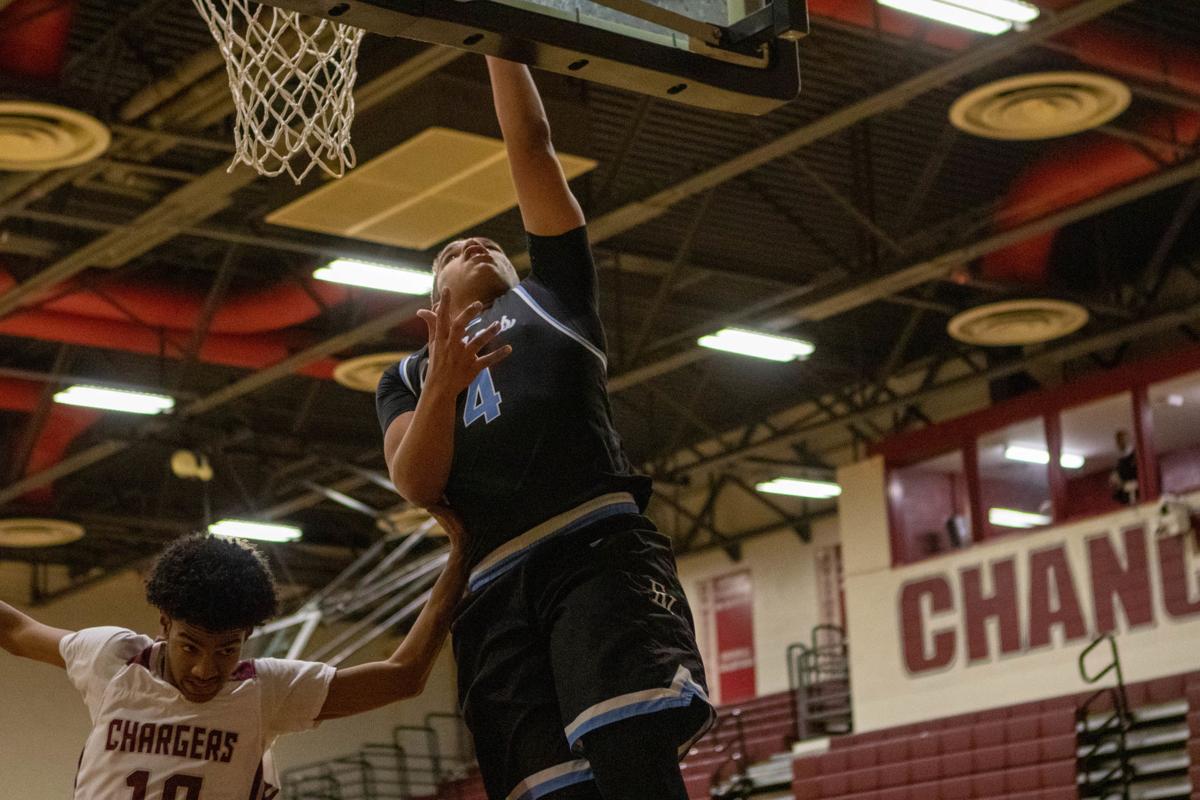 With eight seniors on its roster, the Chancellor boys basketball team entered this season as the most experienced team in the Battlefield District.

Against visiting Eastern View Friday night, that experience showed up in droves.

Shane Batten scored a game-high 29 points, Breydon Williams chipped in 20, and Ziggy Carter posted a double-double with 11 points and 12 assists as the Chargers rolled to a commanding 74-59 victory over the Cyclones.

"We have the most seasoned, veteran team [in the district]," Chargers head coach Craig Boothe said.  "All eight of our seniors were major contributors to our success last year.  They've all been in this movie before, so it's just about managing expectations."

Batten has arguably exceeded expectations thus far in 2021.  A steady scorer who tallied 16 points to help buoy Chancellor to an upset victory over Courtland in last season's district tournament championship game, the senior already had outings of 21 and 16 points in the Chargers' first two matchups against Spotsylvania and Caroline, respectively.  But his hot start to the second quarter Friday helped turn the contest on its ear and paved the way for a career night.

With the Chargers trailing 14-10 to start the period, Batten went on an 11-2 run by himself, giving the hosts a lead they never relinquished.  Nine of his points came on 3-pointers—a harbinger for the six treys he finished the night with.

Batten wasn't the only Chancellor player who caught fire in the second frame, however.  Classmate Williams sank three of his 5 3s in the game during the stanza, helping the Chargers open up a double-digit halftime advantage at 37-27.

"They both shot the lights out tonight," Boothe said of the senior duo.  "Those two have both worked so hard to improve their games.  Shane has the prettier shooting form out of the two of them, but all that matters is whether or not it goes in."

The shots kept going in for Batten in the second half.  He scored 16 points, and his last 3 of the night gave Chancellor a 63-42 lead early in the fourth quarter.

"We just work hard every day," a modest Batten said of his hot start to the campaign.  "Most of us get extra work in on the side beyond our regular practices because we want to build on winning the district title last season."

Another senior, the frenetic Carter was seemingly everywhere for the Chargers.  He registered seven of his 11 points in the third period and, in addition to his game-high 12 assists, he corralled five rebounds and three steals.

"I just play my role," Carter said.  "I don't really look to score; I just try and get everybody involved and put them in good position to score."

Williams said the camaraderie and experience playing together is the primary reason for Chancellor's fast start.

"Most of us have been playing together since fifth or sixth grade," he remarked.  "We've all been putting in work together for a long time and we all know our roles.  That's something that can carry us a long way."

The Cyclones staged a short rally in the game's final minutes, cutting the deficit to 65-54 on a 3-pointer by senior point guard D'Aze Hunter with 3:30 to play.  They couldn't get any closer than that, however.

"The effort just wasn't there tonight," Eastern View head coach Patrick Thornhill said.  "We simply did not play good basketball, and it certainly didn't help that [Chancellor] shot the ball as well as they did."

With over 1,000 points amassed in his career, Ricky Goode-Wright's scoring ability isn't exactly the best-kept secret in the Battlefield District.

Chancellor’s Shane Batten (0) goes up for two of his game-high 29 points against Eastern View Friday night. The host Chargers won the game 74-59.

Chancellor’s Shane Batten (0) makes one of his six 3-pointers on the night as Eastern View’s T.J. Coles looks on.