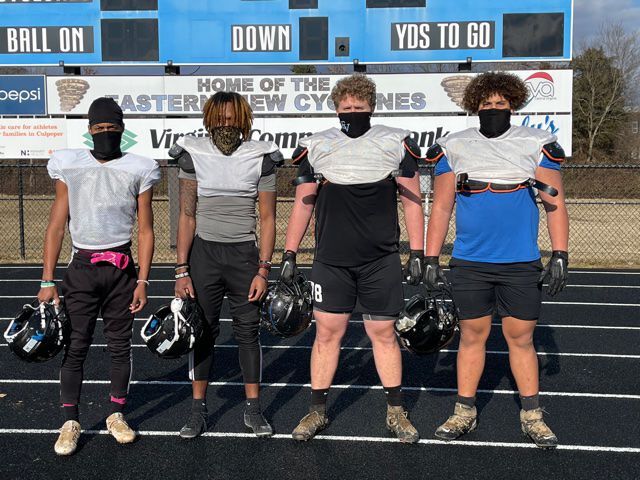 From left: Josh Logan, Raq Lawson, Elijah Hoskin and Brayden Walker are all returning starters who will play on both sides of the ball for the Eastern View football team this season. 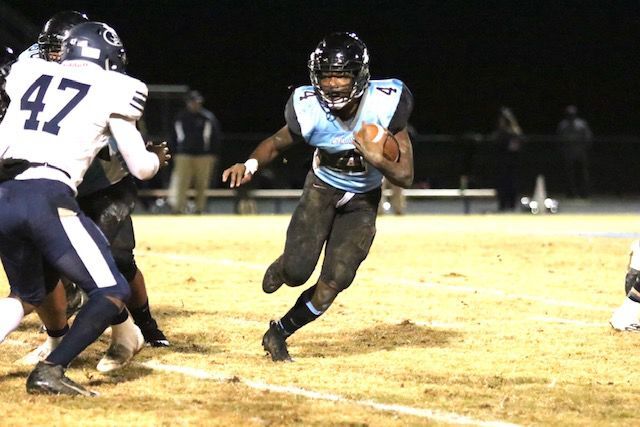 Eastern View’s Raq Lawson looks for a hole during a 2019 Region 4B semifinal game against Dinwiddie. Lawson, who was an honorable mention all-region and first-team all-Battlefield District selection last season, is back to spearhead the Cyclones’ rushing attack.

For several years now, the Eastern View football team has prided itself on a balanced offensive attack that’s kept opponents guessing whether the Cyclones were going to beat them with the run or the pass.

This season, Eastern View’s approach figures to be at least a little more straightforward though.

With a bevy of talent and experience returning in the backfield and along the line, the Cyclones figure to be a run-first outfit when they open their 2020-21 season against Battlefield District foe Caroline at Courtland High School Monday at 5 p.m.

“First and foremost, our offensive line should be our main strength,” Eastern View head coach Greg Hatfield said. “Brayden [Walker] and Elijah [Hoskin] were two of the best offensive linemen in the region last year, and they’re leading a good corps of guys up front for us.”

Hoskin, who committed to Old Dominion in the fall, is a three-year starter for Hatfield’s squad who garnered first-team all-Region 4B honors a season ago. The 6-foot-3, 278-pound senior will line up at right guard.

Now a sophomore, Walker (6-2, 275) turned heads as a freshman on his way to receiving honorable mention all-district recognition. He will occupy the other guard spot.

The other returning starter in the trenches is senior right tackle Nate Newton (6-4, 270), who currently has walk-on offers from Division II schools Virginia Union and UVA-Wise.

“It’s his time to shine as a senior,” Hatfield said of Newton. “And he has the body type and overall makeup to do it.”

Junior Corey Long (6-5, 245), a key contributor for the Cyclones’ regional champion boys basketball team that advanced to the Class 4 state semifinals, steps in to fill the left tackle position.

Hatfield said sophomore Lance Deane (6-0, 220) and senior Sammy Fairfax (5-6, 236) are battling it out for the starting duties at center. He also added that junior Jayden Buturla (5-11, 195) should see playing time at the tackle slots.

That group will be opening holes for junior tailback Raq Lawson, who rushed for 942 yards and 10 touchdowns on his way to garnering honorable mention all-region and first-team all-district accolades in 2019.

Lawson, who played for Eastern View’s boys hoops squad last year, opted to sit out their run to the Final Four this winter so he could focus solely on football.

“I’ve been looking forward to this ever since the 2019 season ended,” Lawson said. “All the camps, the solo workouts during quarantine and everything else that’s happened in the past year has prepared me for this.”

Senior Chaz “Mikey” Keene, a regional wrestling champion in the 285-pound weight class, will also have his opportunities to tote the pigskin.

Eastern View will be breaking in a new starting quarterback for the second consecutive season. Hatfield said junior Caden Huseby (6-2, 170) brings more size and a stronger arm to the fold than last year’s starter Till Butler, but it remains to be seen if he can duplicate the 59.3% completion clip (80-135), yardage total (1,650) or touchdown-to-interception ratio (29-3) that made Butler a first-team all-region pick.

Complicating matters for Huseby in the passing game is an inexperienced receiving corps. The Cyclones lost their top three targets in Alex Spangler, Blake Leake and Chance Graves to graduation. That trio combined for 62 receptions, 1,345 yards and 26 scores a year ago, with Spangler being named second-team all-state and Leake and Graves each notching all-region honors.

The lone returnees at receiver are seniors Josh Logan and Greg Bradley. Three of their classmates—Daniel Taylor, D’Artagnan Sherbeyn and Jalen Woodward—will have their chances to make an impact there, as will junior Connor Weeks and freshmen Amaree Robinson and D’Myo Hunter.

“We’re just so raw at [receiver] that I don’t really know what to expect right now,” Hatfield remarked. “There are definitely some very good athletes there, but they have to be able to run good routes and catch the football too.

“We’re definitely going to look different on [offense],” he continued. “We lost three great receivers, but I feel great about our running game between Raq, Mikey and Caden.”

On defense, second-team all-region selection Hoskin will return to the tackle spot he’s occupied for the past two seasons. Walker will line up next to him to round out the interior defensive line, while Long, junior Caleb Quinn and freshman Keegan Brown will all see snaps at the end slots.

Keene, an honorable mention all-district performer, is back to lead the linebacking unit. Bradley, senior Logan Ashwell and freshman Jayden Williams will also be in the mix there.

The losses of Spangler, Leake and Graves didn’t just hit the receiving room hard, as all three started in Eastern View’s secondary as well. Spangler led the team with five interceptions and was a first-team all-region honoree, while Leake (3) and Graves (1) made second team and honorable mention, respectively.

Logan, who was second on the squad with four interceptions, is the only returning starter. He’ll once again play cornerback, while fellow senior Daniel Taylor, Hunter, Robinson and sophomore Jasian Spencer are vying for time at the other corner spot.

Lawson, who started at linebacker a year ago, has moved to safety in an effort to fortify the back end of the Cyclones’ defense.

“We definitely have more to prove on the back end of the [defense] than we have the last few seasons,” Hatfield said. “But we’ve got some experienced guys that have played a lot of football for us, such as Elijah, Raq, Brayden, Mikey and Daniel, so I believe we’re capable of having a good defense.”

Senior Jonathan Bales will handle the kicking and punting duties for Eastern View, replacing graduated all-state standout Garrett Hutchinson. The Cyclones are still evaluating their options to replace Spangler in the return game, where he was first-team all-state after taking two punts back for touchdowns.

Eastern View has compiled a 75-12 record over the past seven years, winning five district championships, one region title and advancing to at least the second round of the playoffs every season. When asked about the Cyclones’ chances of continuing that success while playing an all-district schedule that includes fellow playoff squads James Monroe and King George, Hatfield was characteristically candid.

“This is going to be a Phil Niekro-type season,” he said with a chuckle. “What I mean by that is, you’re going out there trying to hit a knuckleball every day between COVID, the usual injury concerns and the fact that you’re jumping right into district play with no film to study whatsoever. We’ve had great practices and the kids are really excited to be out there, but I think this season will be defined by how well we can handle and adjust to new situations on a consistent basis.”

Region 4B First Round

The Culpeper boys basketball team put four players on the Class 4 all-Northwestern District team, which was voted on by coaches last week.

High school football: Cyclones hope to avoid being stung by the unknown

There are many aspects of playing high school football during a pandemic that are markedly different from what they were before COVID-19. Play…

Sean Wray returned the opening kickoff 72 yards for a Courtland touchdown Saturday afternoon, and the Cougars never let up, dominating the vis…

Louisa senior Kalup Shelton showed Saturday he’s ready to take the mantle of featured back after leading the Lions to a 44-20 come-from-behind victory over rival Orange County at Charlottesville High School.

From left: Josh Logan, Raq Lawson, Elijah Hoskin and Brayden Walker are all returning starters who will play on both sides of the ball for the Eastern View football team this season.

Eastern View’s Raq Lawson looks for a hole during a 2019 Region 4B semifinal game against Dinwiddie. Lawson, who was an honorable mention all-region and first-team all-Battlefield District selection last season, is back to spearhead the Cyclones’ rushing attack.