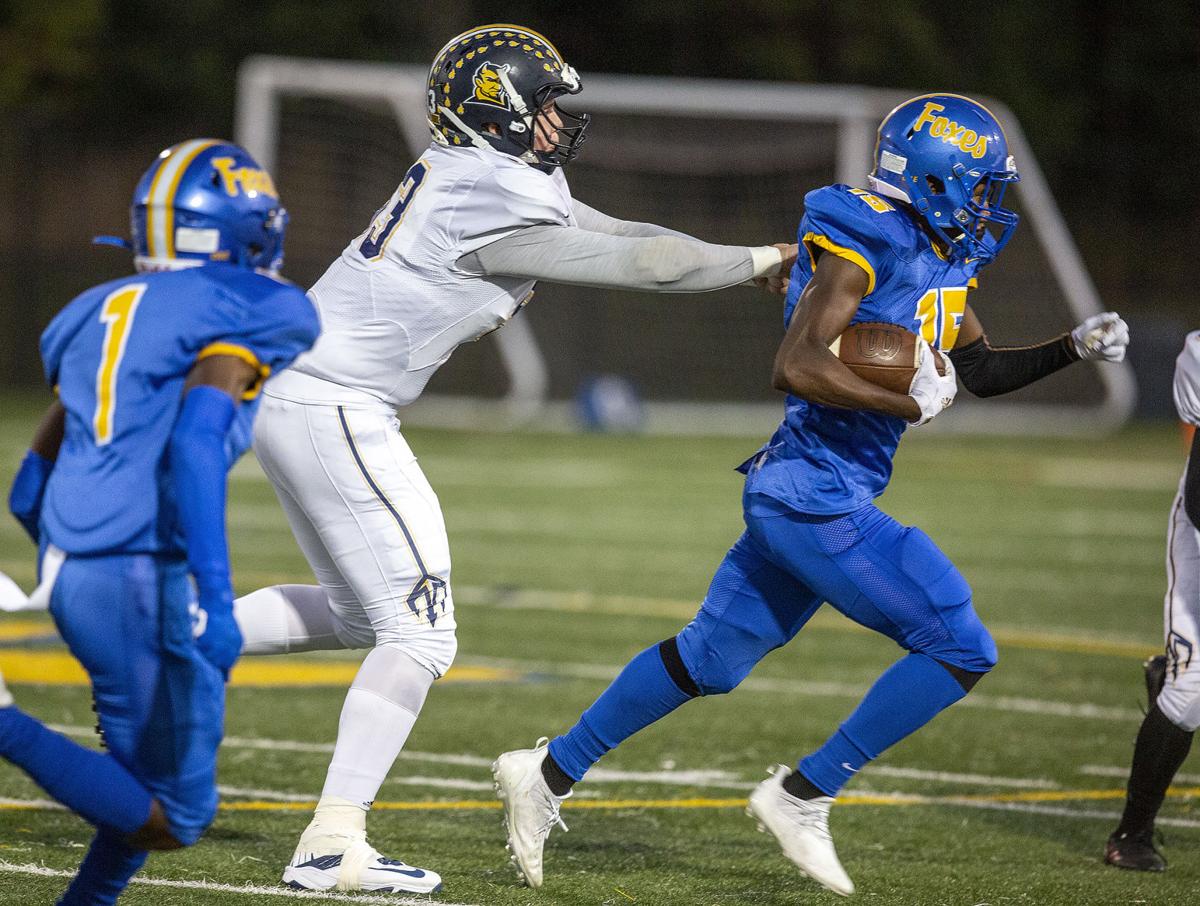 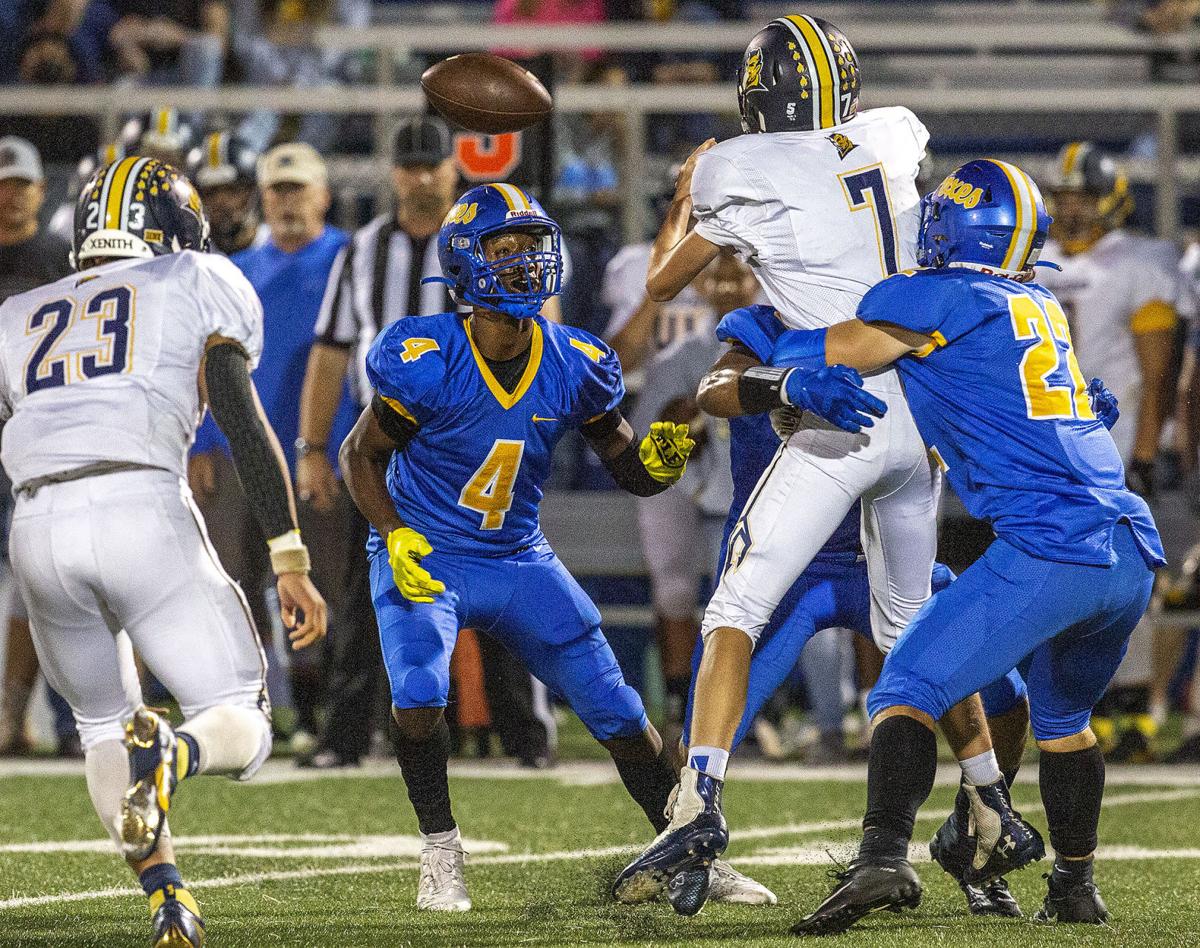 Victory was already well in hand, but Vern Lunsford couldn’t pass up a shot at passing history for Zach Ferguson.

So with a 48–7 lead over Culpeper County, Lunsford sent Ferguson and the rest of King George’s offense back onto the field for the second half Friday night. And his junior quarterback delivered with his seventh touchdown pass of the night to set an area record and cap the unbeaten Foxes’ 55–7 Battlefield District victory over the visiting Blue Devils.

“I was told at halftime [that the record was within reach],” Lunsford said. “So if the situation presented itself, we were going to continue to run our offense and give him a shot at it. It just so happened that a lot of our offense tonight came through the air.”

With a 15-yard scoring pass to Mekhai White in the final minute of the third period, Ferguson broke the area record set in 2016 by Chancellor’s Jason Brown (who is now a backup at the University of South Carolina). Then he and the rest of the Foxes’ offensive starters retired to the sideline to celebrate their fourth straight victory this season.

“Before the game, I didn’t know about the record,” said Ferguson, who backed up All-Area quarterback Charles Mutter in the spring. “Then people started telling me during the game that I was getting close. I just kept playing my game and scoring touchdowns.

“It’s always been clicking with our receivers. Tonight, everything was open that we were running.”

It certainly helps that Ferguson has an array of talented targets, including three potential future Division I college players, all of whom enjoyed a significant size advantage over Culpeper’s defensive backs. And he spread the wealth, connecting with White for three scores, fellow sophomore Chanz Wiggins for two and Kyle Reviello and Mauricio Blanco one each.

“He was behind Charles, who was a great quarterback, and he’s following in his footsteps,” White said of Ferguson. “It’s great. He makes the receivers’ job easier.”

Ferguson finished the night 15 for 24 for 268 yards in three quarters of work for the Foxes (4–0, 2–0), who also got 101 rushing yards and a touchdown from senior Gabe Aley and never had to punt.

“When they get rolling, they’re a very dynamic offense,” Culpeper coach James Ford said. “... We just ran into a buzzsaw tonight.”

Not to be outdone by their offensive teammates, King George’s defenders also rose to the occasion. They stuffed Culpeper junior Malachi Terrell, the area’s leading rusher, for losses on each of the Blue Devils’ first two offensive plays.

Terrell finished with 108 yards on 17 carries, most of which came on two breakaway runs of 30 and 58 yards. The first set up the Blue Devils’ only touchdown of the night, a 5-yard second-quarter pass from Bennett Sutherland to Alex Lowe. King George held Culpeper (3–3, 1–2) to 149 total offensive yards and eight first downs.

“For the most part, we were never able to get into a rhythm,” Ford said. “Their defense flies to the ball. They’re very fast and well-coached. They put our offense in a lot of tough spots. They did the things they were supposed to do.”

The Foxes will shoot for their 15th straight regular-season victory next Friday at winless Caroline, while Culpeper visits Spotsylvania.

MLB lockout: What you need to know

MLB lockout: What you need to know

With a promising nucleus of players returning from a team that qualified for the Region 4C tournament last winter, Culpeper County High School…

The Lancies 2021: A feasting of the best of area high school football