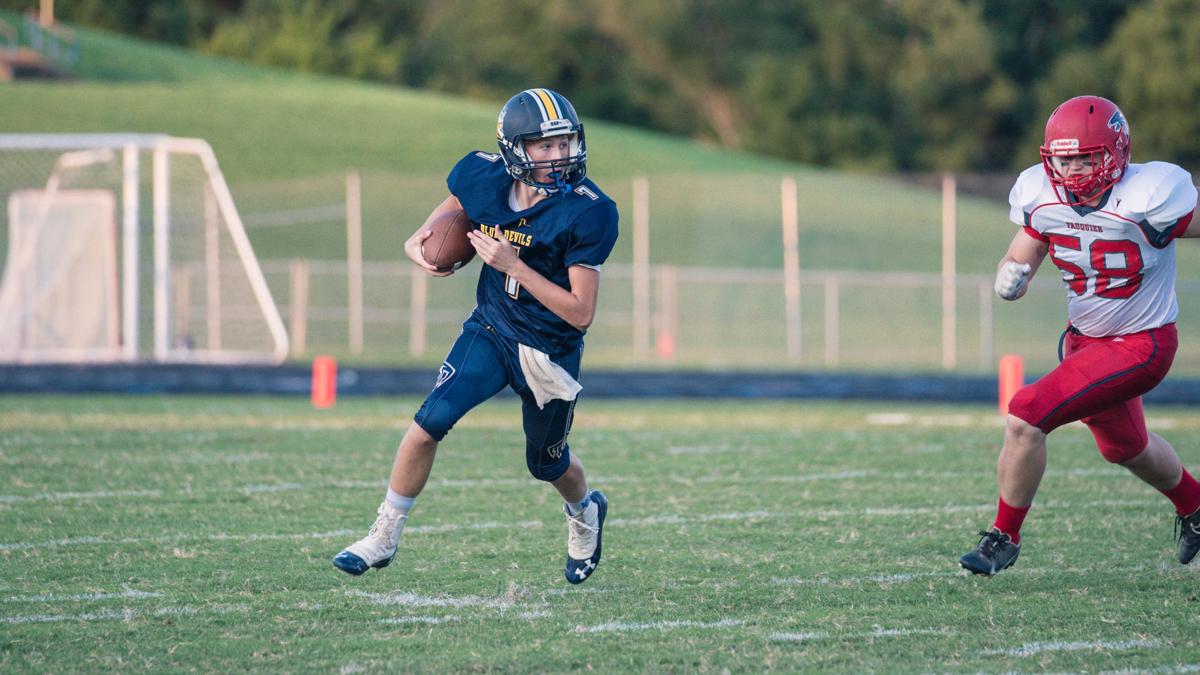 Culpeper County quarterback Bennett Sutherland (left) scrambles during a game against visiting Fauquier on Friday, Sept. 17, 2021 at Broman Field. Sutherland set a new school record for completion percentage in a single game after going 17 for 21 in last week’s 34-21 victory over Spotsylvania. 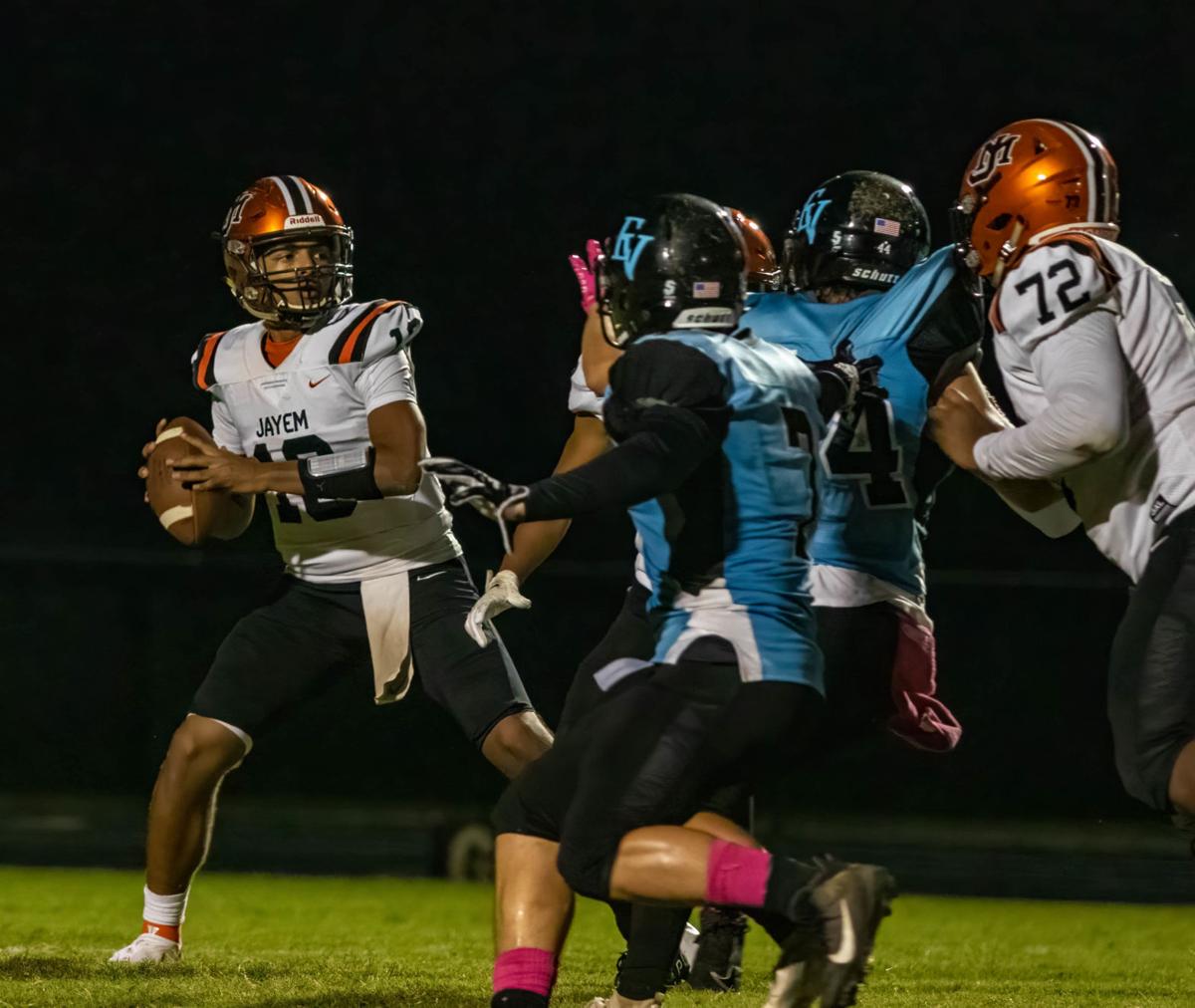 James Monroe’s Bryce Caldwell (left) looks for an open receiver during a game at Eastern View High School on Friday, Oct. 8, 2021. Caldwell threw for 149 yards and a touchdown in the Yellow Jackets’ 6-3 victory.

When it comes to the Culpeper County football team, most of the attention from fans and opposing teams tends to revolve around Malachi Terrell.

You’d be hard-pressed to argue that Terrell’s growing fame isn’t well-deserved. The junior running back has rushed for Fredericksburg-area highs of 1,148 yards and 12 touchdowns so far this season, eclipsing the 100-yard mark in six of the Blue Devils’ seven games and going over 200 yards three times.

Those who believe Culpeper is a one-trick pony may want to reconsider their position, however.

Sutherland was so dialed in that his 81% completion percentage set a new school record, breaking the previous mark set by Hunter Crim in a matchup with Brentsville District on Nov. 6, 2015.

“He’s getting more comfortable in our offense,” Culpeper head coach James Ford said of Sutherland, who took over as the starter early last season. “What he did last week is a product of the work he and our receivers have been putting in.”

That work paid off at the most opportune times against the host Knights.

With the Blue Devils (4-3 overall, 2-2 district) trailing in the second quarter, Sutherland connected with A.J. Marshall for a 16-yard strike that tied the score at 7 apiece. Then, with Culpeper behind 14-7 and needing another spark early in the third period, he threw a 5-yard TD pass to Cole Plaster to knot things up a second time.

Sutherland’s efforts paved the way for Terrell, who finished the night with 169 yards on the ground, to take over the contest down the stretch. Terrell ran for three scores in the fourth quarter, securing the Blue Devils’ fourth win in their past five outings.

“I just got more opportunities to throw the ball [against Spotsylvania],” said Sutherland, who is completing 65.6% of his passing attempts this fall. “We definitely like feeding Malachi the ball as much as we can, but the coaches trusted me to make plays and I just tried to take advantage of that.”

Marshall, a junior who missed Culpeper’s first six games due to a preseason injury, wasted no time heaping praise on his QB.

“He played phenomenally,” Marshall said. “We want to open up our passing game, because that enables us to do what we do best, which is dominate opposing teams on the ground. Bennett made all the right reads at the right times and put the ball in the best positions for the entire receiving corps to make plays.

“He’s only going to get better, and that’s exciting to think about,” he added.

Culpeper will look to keep its momentum rolling when it travels to Fredericksburg’s Maury Stadium for a huge matchup against James Monroe (2-4, 1-2) on Friday night. The two squads are neck and neck in the Region 3B playoff race with just four weeks left in the regular season—the Blue Devils currently own the No. 4 seed with a 19.57 power rating and the Yellow Jackets are in fifth place with a 17.50.

If the postseason started today, JM would travel to Broman Field to play Culpeper.

The Jackets have a budding star of their own at QB in Bryce Caldwell. The sophomore went 13 of 30 for 149 yards and tossed the game’s lone TD in a 6-3 road victory over Eastern View last Friday. The decisive score covered 44 yards to Christian Hamm barely three minutes into the contest.

“I’m just trying to focus on making my plays and being a great teammate,” Caldwell told the Star-Exponent after that game. “Coming in here and winning this game definitely boosts our momentum heading into our homecoming game next week.”

Ford said the Caldwell-to-Hamm combination, as well as an athletic group of skill-position players, will make beating JM difficult.

“They are extremely athletic and talented,” he said. “It’s going to be a tall task to beat them, and we will have to play our game in order to do so.”

NFL Week 6 Market: Will weather be a factor?

High school football preview capsules: Eastern View looks to get back on track against Spotsylvania

Week 8 of the 2021 (fall) high school football season is upon us. This week’s slate of games includes a Battlefield District contest between E…

Week 7 of the 2021 (fall) high school football season is upon us. This week’s slate of games includes a Battlefield District contest between C…

When he took over the reins as Eastern View’s head football coach in June, Brian Lowery knew he’d be working with a relatively young nucleus o…

Culpeper County quarterback Bennett Sutherland (left) scrambles during a game against visiting Fauquier on Friday, Sept. 17, 2021 at Broman Field. Sutherland set a new school record for completion percentage in a single game after going 17 for 21 in last week’s 34-21 victory over Spotsylvania.

James Monroe’s Bryce Caldwell (left) looks for an open receiver during a game at Eastern View High School on Friday, Oct. 8, 2021. Caldwell threw for 149 yards and a touchdown in the Yellow Jackets’ 6-3 victory.