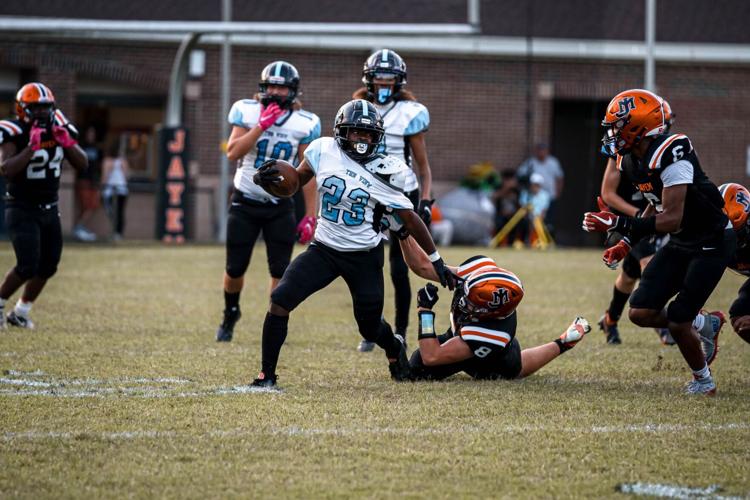 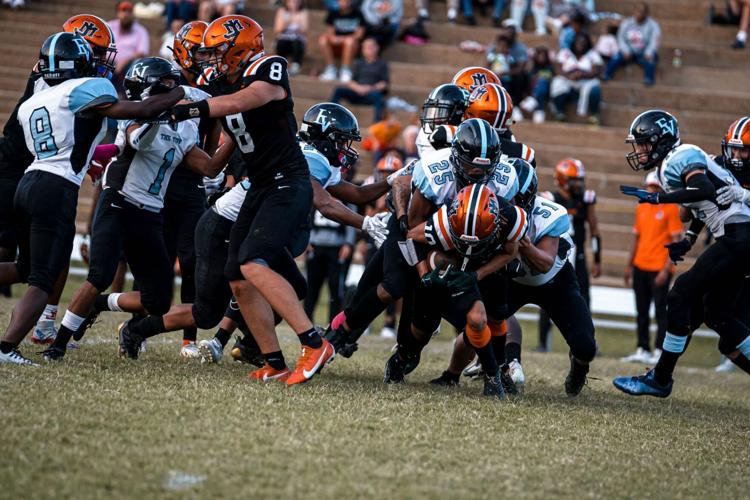 A host of Eastern View defenders, including Jaheim Frye (25) converge on James Monroe’s Marquise Thornley (10) during a football game at Maury Stadium in Fredericksburg, Friday, Oct. 7, 2022. 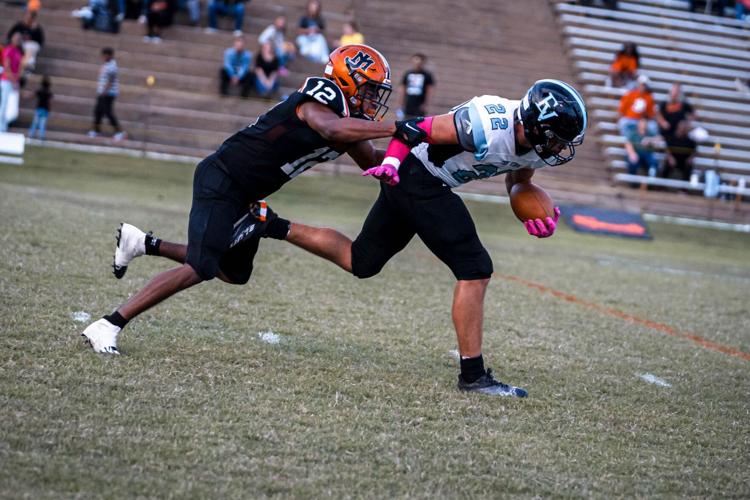 Hunter racked up 318 yards of total offense, completing 7 of 15 passes for 186 yards and three scores and carrying the ball 12 times for 132 yards and a touchdown.

Stafford scored three times in the second quarter—on a 10-yard run, a 30-yard run and a 21-yard pass from Hunter—to help the Cyclones (6-1 overall, 4-0 district) turn a 7-6 lead into a 34-6 halftime advantage. The sophomore running back tacked on an 84-yard punt return for a touchdown in the fourth period.

Stafford finished the game with over 200 all-purpose yards, which included 90 rushing yards on 11 attempts.

In between Stafford’s two second-quarter touchdown runs, Hunter scored from a yard out. Then in the third period, he threw touchdown passes of 21 and 66 yards to Tre Brock and Xavier Carr, respectively.

Eastern View’s defense held the Yellow Jackets (1-5, 0-3) to 108 yards of total offense and forced five turnovers—four of which were interceptions. JM’s lost fumble was scooped up and returned for a score by Josh Perez, which gave the Cyclones a 7-0 first-quarter lead.

Eastern View will return to action Friday, when it hosts Spotsylvania. JM will visit Culpeper the same night.

SPOTSYLVANIA 20, CULPEPER 7: Mason Christopher was 8 for 8 for 184 yards passing, ran for a game-high 102 yards on 18 carries with two scores and had a fourth-quarter interception to seal the Knights’ Battlefield District win over the Blue Devils.

Christopher gave the Knights an early lead with a 1-yard touchdown run in the second quarter. Culpeper’s Devon Polleri followed that with a 22-yard scoring scamper, tying the score at 7 apiece, but the Knights’ Luke Dickinson answered back with a 2-yard plunge late in the first half that gave his squad the lead for good.

Culpeper stopped three Spotsylvania drives inside the Blue Devils’ 20-yard line, aided by clutch defense and 12 penalties on the Knights. But Christopher stretched the Spotsylvania (3-3, 2-1) lead to two scores with a 45-yard touchdown run in the fourth quarter.

Culpeper managed to drive the ball to the Knights’ 27 late in the contest, but Christopher jumped in front of a Bennett Sutherland pass to the end zone, collecting the interception to slam the door shut on the Blue Devils’ comeback hopes.

LOUISA 49, ORANGE 7: In a matchup between unbeaten teams, Louisa and Orange traded scores to open the game before the Lions reeled off 42 unanswered points en route to a Jefferson District win on Friday night.

Landon Wilson finished with 183 yards and three scores passing and added 53 yards and two more scores on the ground to lead Louisa (7-0, 4-0).

Christian Simpson scored on a 57-yard run for the Hornets (4-1, 1-1)—who visit Fluvanna Friday—but the hosts managed only 131 total yards outside of that scoring effort.

For the better part of three quarters Tuesday night, it looked like the Culpeper girls basketball team was about to announce itself as the new…

Like their counterparts in other sports, the girls basketball teams at Culpeper and Eastern View always anticipate playing each other. Crossto…

Brett Clatterbaugh and Brayden Walker are used to doing things together.

For the better part of three quarters Tuesday night, it looked like the Culpeper girls basketball team was about to announce itself as the new…

The Culpeper girls basketball team won its 10th game in a row Friday night, defeating Chancellor 58-55 and setting up a crosstown showdown wit…

As it has all season long, the Eastern View girls basketball team set the tone with its defense in Tuesday’s Battlefield District road game at…

Over the past two seasons, Nate Amos has been the Culpeper boys basketball team's most prolific scorer, earning both all-district and all-regi…

IOC to allow Russian athletes to compete In 2024 Olympics

A host of Eastern View defenders, including Jaheim Frye (25) converge on James Monroe’s Marquise Thornley (10) during a football game at Maury Stadium in Fredericksburg, Friday, Oct. 7, 2022.