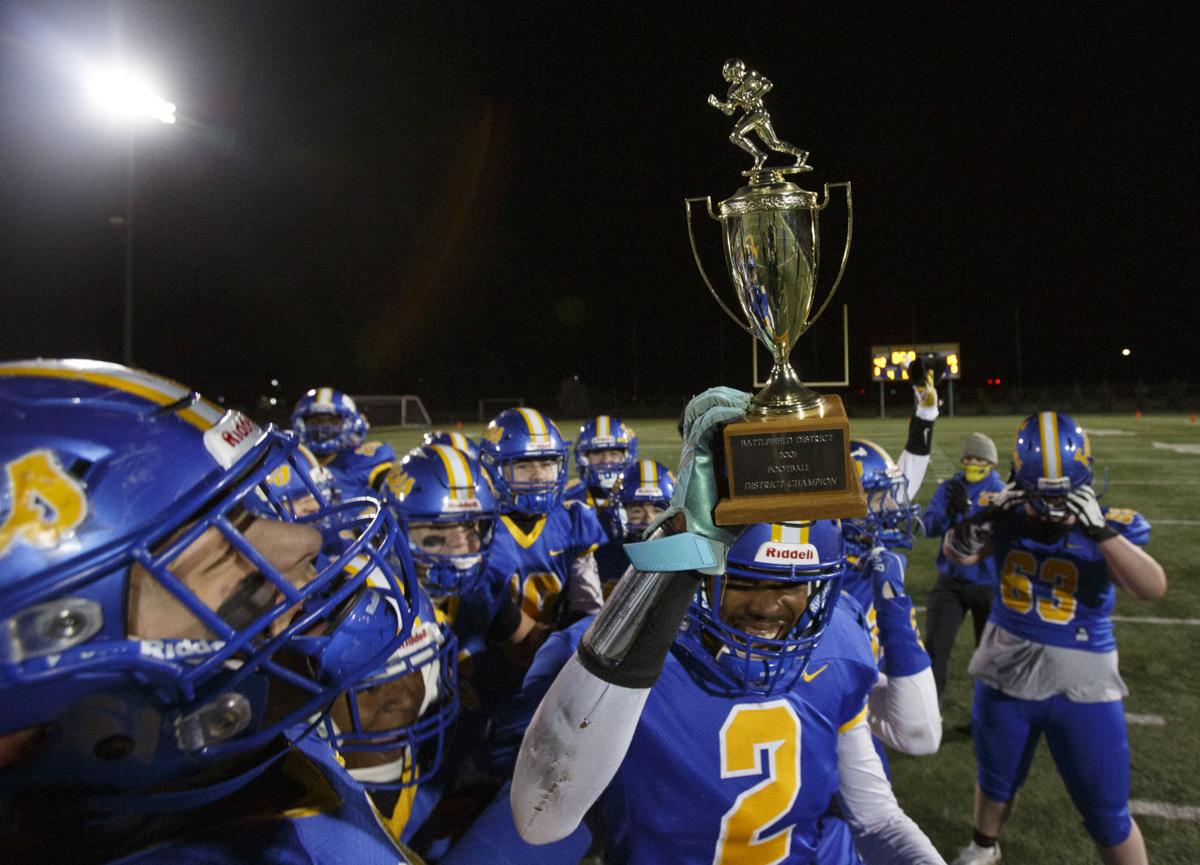 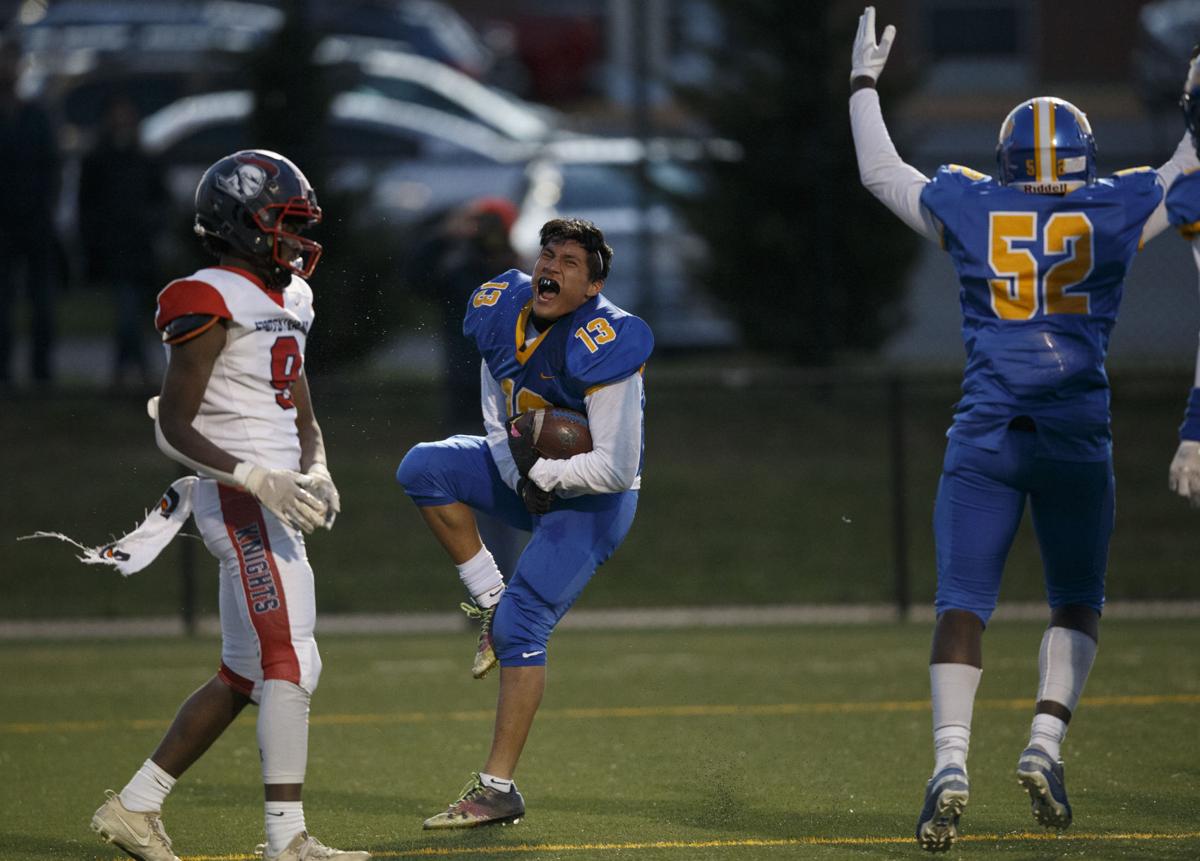 The Foxes’ Mauricio Blanco celebrates his touchdown despite losing his helmet Friday night. 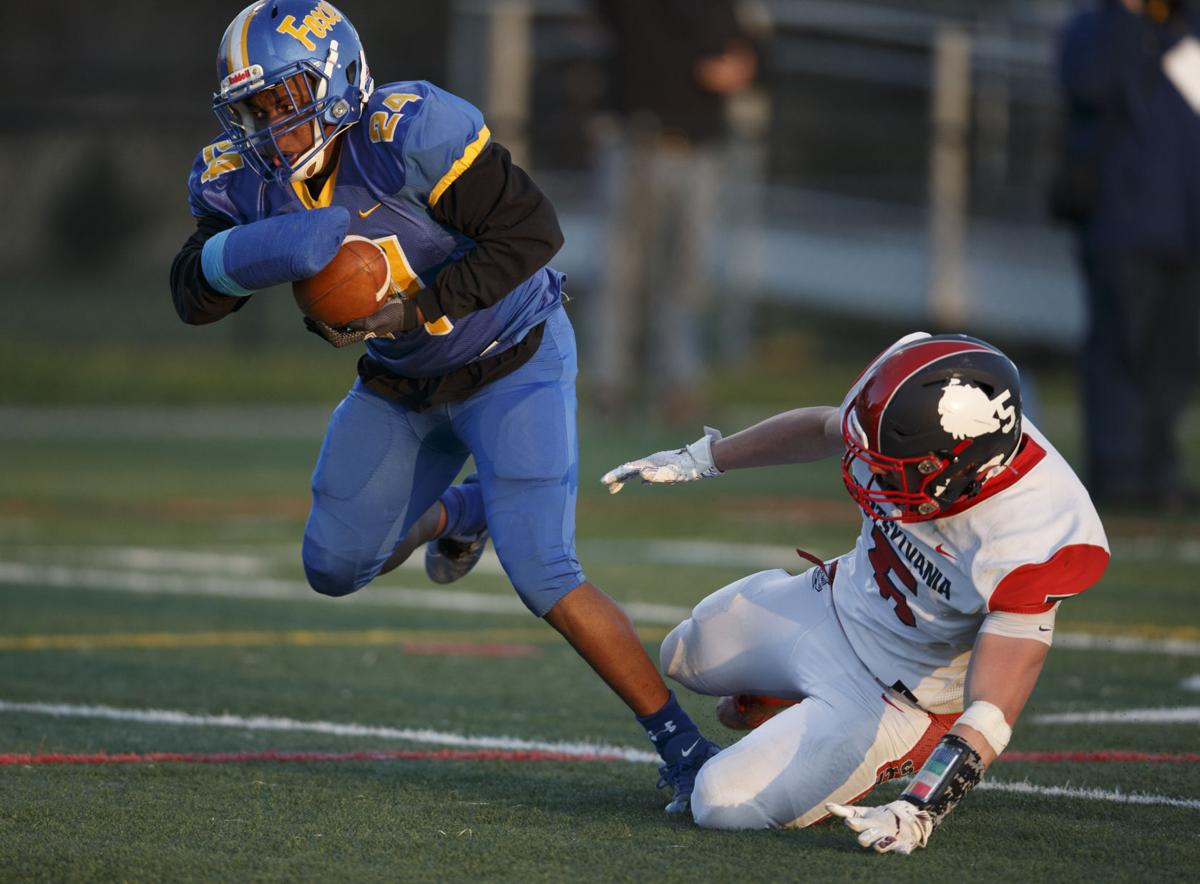 The Foxes’ Xavier Harrison scores a touchdown after recovering a blocked punt on Friday night. 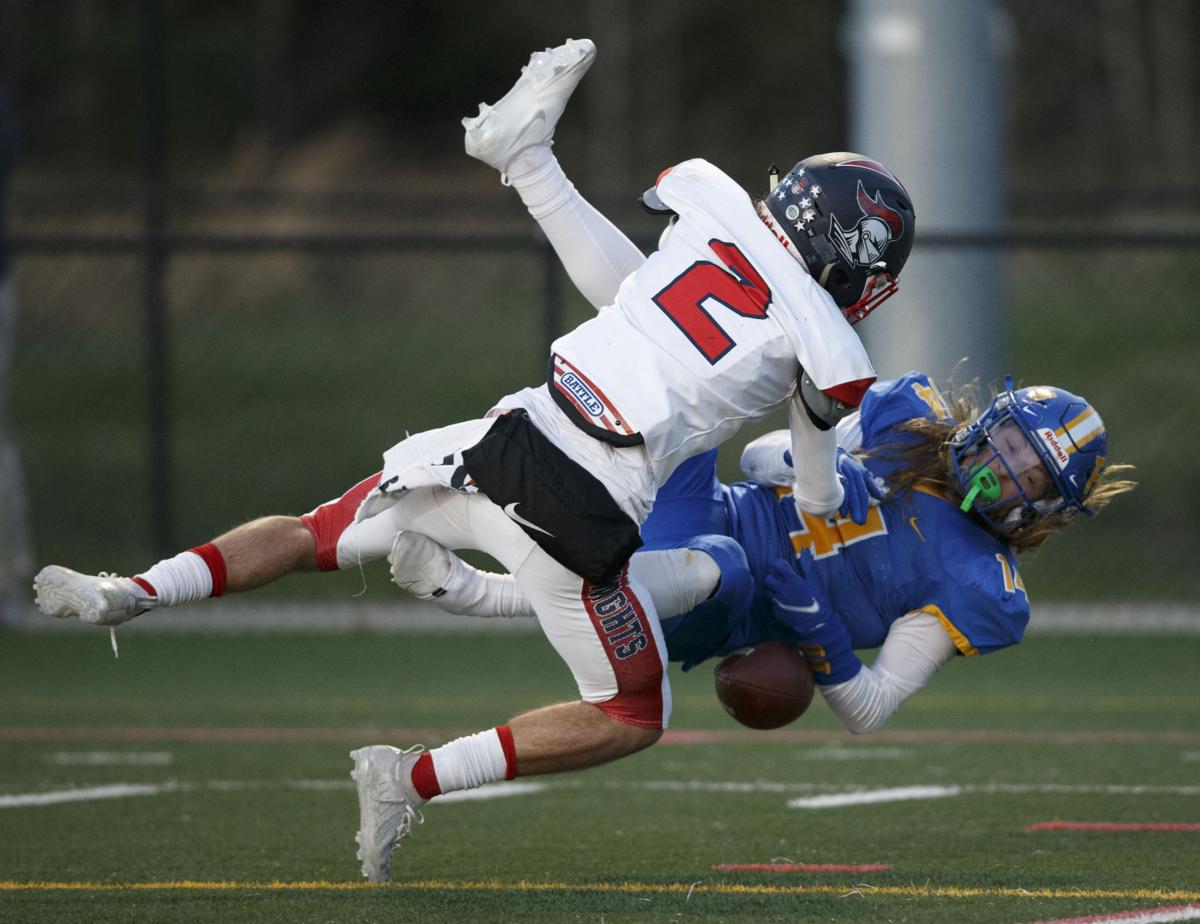 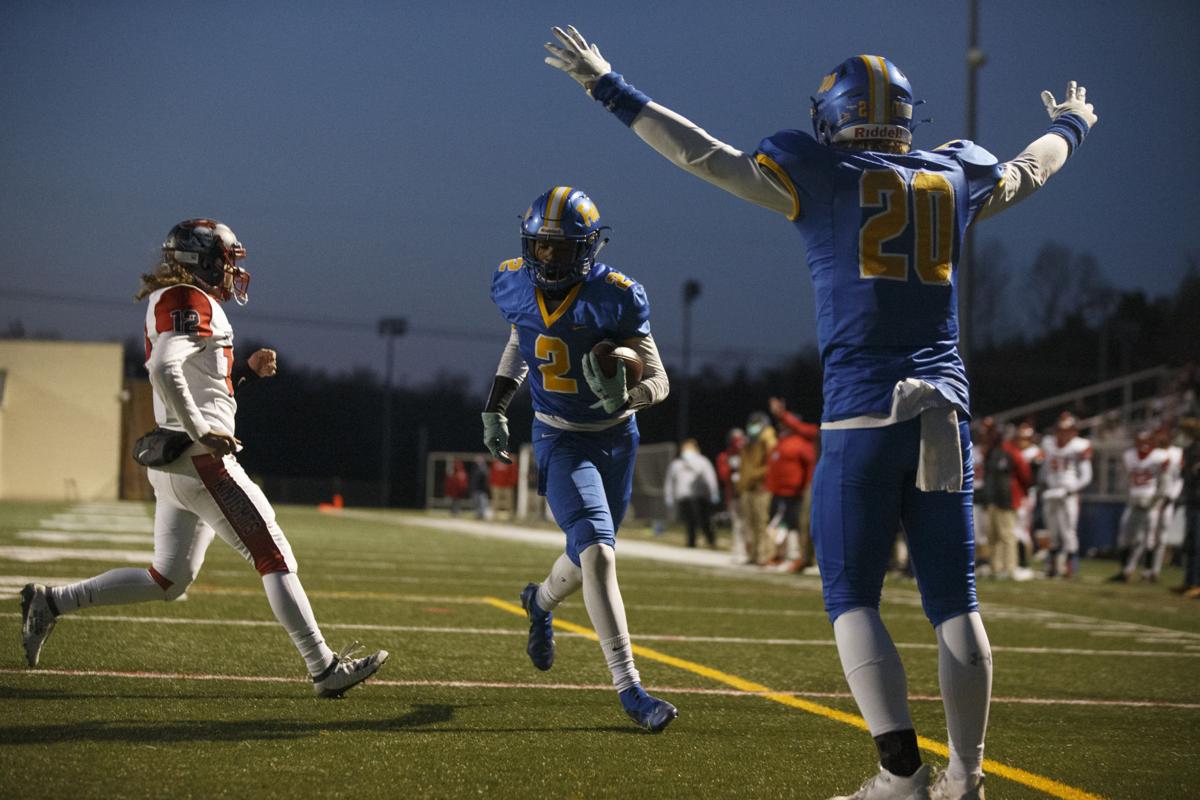 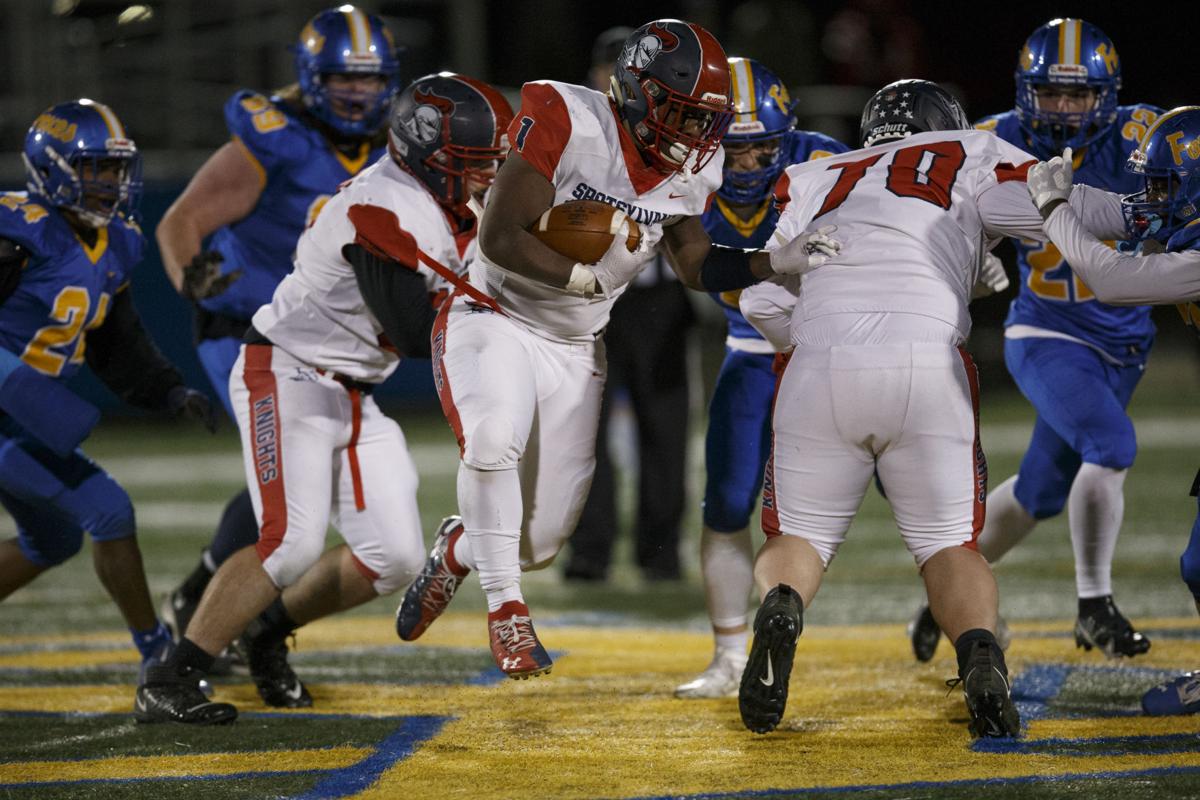 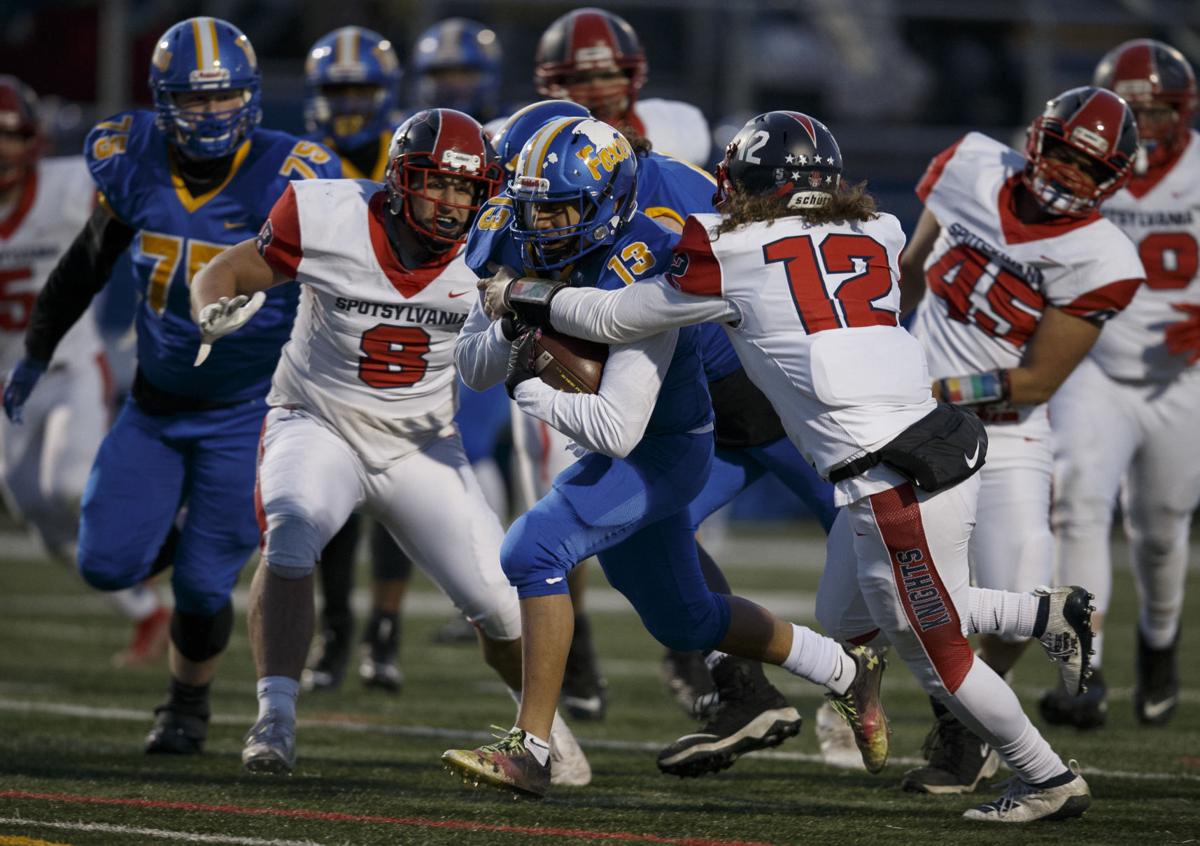 Perhaps it’s fitting that in a high school football season like none other, the Battlefield District crowned a champion that bore scant resemblance to the editions that preceded it over the past two decades.

None of this year’s King George players had even been born the last time the Foxes won an outright Battlefield title, in 2001. That made Friday night’s methodical 42–15 dismantling of visiting Spotsylvania—and the 6–0 record the Foxes will take into the Region 4B playoffs—so notable.

“That’s what’s different this year,” senior quarterback Charles Mutter said. “In the past, we didn’t have the best of one, schedules and two, outcomes to end the season. And as a team, we were kind of down.

King George will face fellow unbeaten Louisa next Friday in the regional semifinals, with the site to be determined. The Foxes and Lions each finished with 6–0 records and 162 power points under the Virginia High School League’s ratings to share the region’s No. 2 seed behind Monacan. That tie will be officially broken on Sunday, possibly by a coin flip, with the winner hosting the game.

Heads or tails, the Foxes will enter the playoffs with confidence. As usual, they got stellar contributions Friday night from Mutter and Javon Campbell, who connected for their 10th and 11 touchdown passes of the abbreviated regular season.

King George also got an unexpected boost from sophomore Mauricio Blanco, who scored twice on short runs, blocked a punt and also contributed one of the Foxes’ two interceptions from his linebacker spot.

“This was kind of a coming-out party for Mauricio,” King George coach Vern Lunsford said. “He’s been doing a great job on defense all year. Tonight, he got some opportunities on offense. The O-line did a great job, and he was exceptional.”

King George’s defense also had its moments, holding the Knights (3–3) to just four first-half total yards and two first downs (both by penalty) while taking a 35–7 lead into the locker room.

King George struck first, with Xavier Harrison scooping up Blanco’s blocked punt and scoring from 4 yards out with 2:28 left in the first quarter. But the Foxes had barely finished celebrating when DeAnthony Pendleton broke several tackles on the ensuing kickoff and returned it 81 yards to tie it at 7.

The second quarter belonged to the Foxes, with two scoring runs by Blanco and two TD passes from Mutter to Campbell. The Knights, who entered on a three-game win streak, couldn’t keep up.

“We had a big win against Eastern View last week, and maybe that took a lot of gas out of the tank, going on that run,” Spotsylvania coach Jeremy Jack said. “We got the looks we were expecting from [King George] tonight, but we simply did not execute at the point of attack.

“They were motivated. You could tell they were on a mission to close out their regular-season run with an undefeated streak, and they certainly did that.”

The Knights, who dealt with a series of key transfers and injuries, have one game remaining in their quest for a winning season: next Friday’s home date with Stafford under the VHSL’s “plus-one” format for non-playoff teams.

Meanwhile, the Foxes have bigger goals in mind.

Winning the district “is a very big deal,” Blanco said. “It’s a team accomplishment, and it feels great.”

Added Mutter: “This is a big step in the right direction for us. We feel very confident now. Now, we’re just trying not to have a slip in the postseason.”

The Culpeper baseball team started its season off on a high note Wednesday night, thumping visiting Warren County 13-3 in a matchup that was s…

To say Monday’s season-opening loss to James Monroe left a bad taste in the mouth of the Eastern View baseball team would be an understatement.

The Foxes’ Mauricio Blanco celebrates his touchdown despite losing his helmet Friday night.

The Foxes’ Xavier Harrison scores a touchdown after recovering a blocked punt on Friday night.