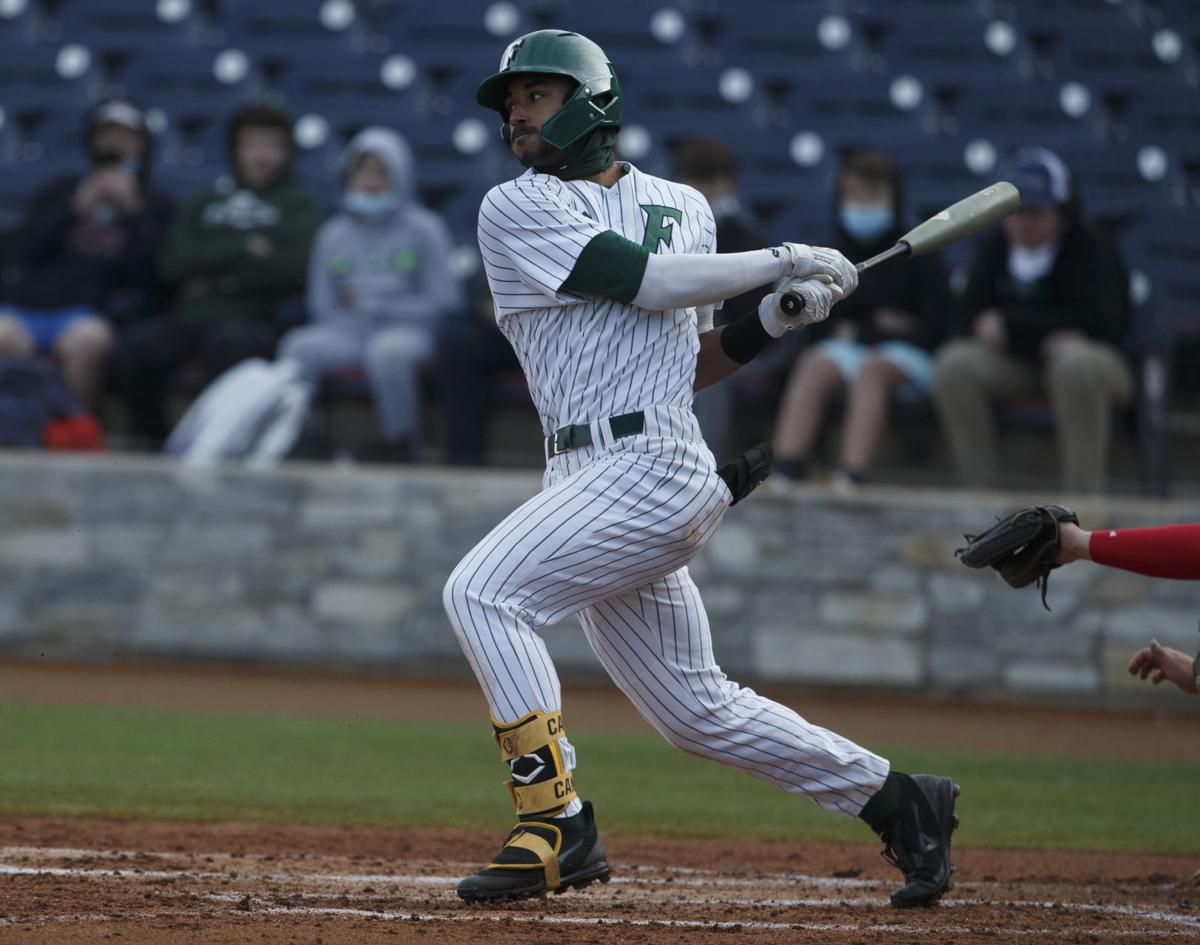 Fredericksburg Christian School’s Elijah Lambros takes a turn at bat during the team’s season opener at FredNats Ballpark in Fredericksburg on March 2. 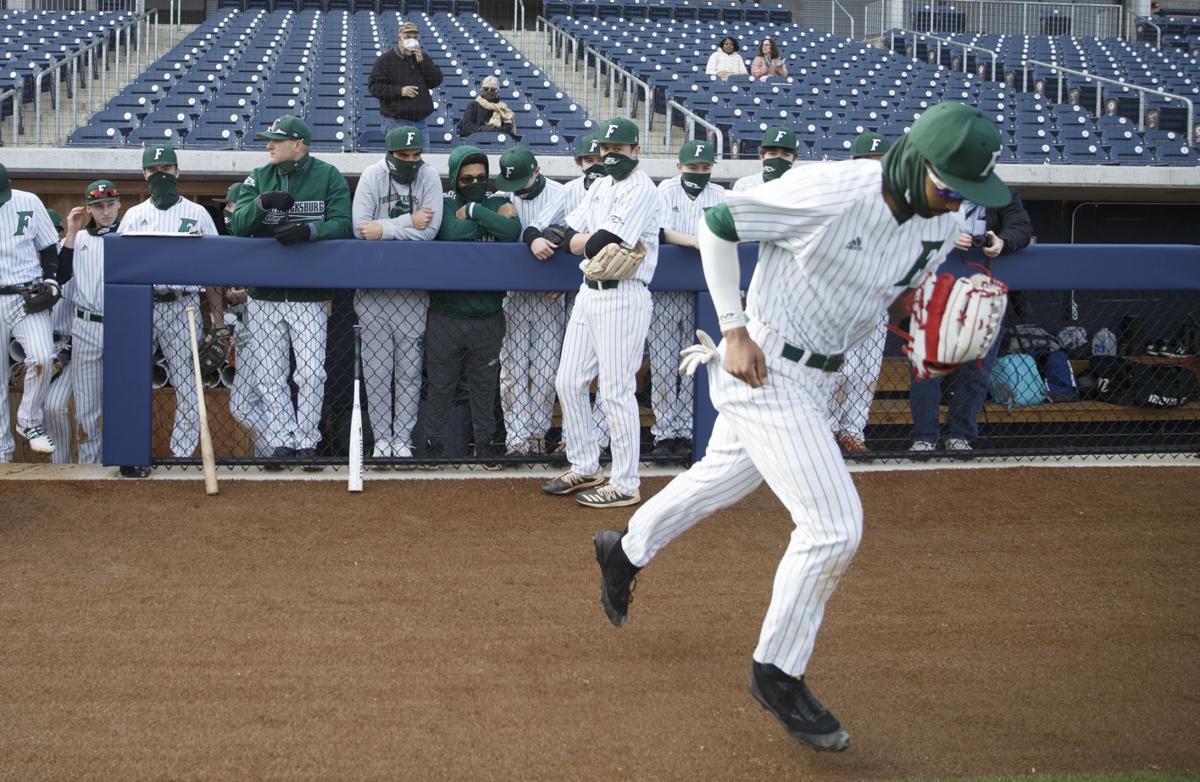 Elijah Lambros (right) played this season with Fredericksburg Christian School. Next season, he may play college ball in South Carolina or suit up for the pros. 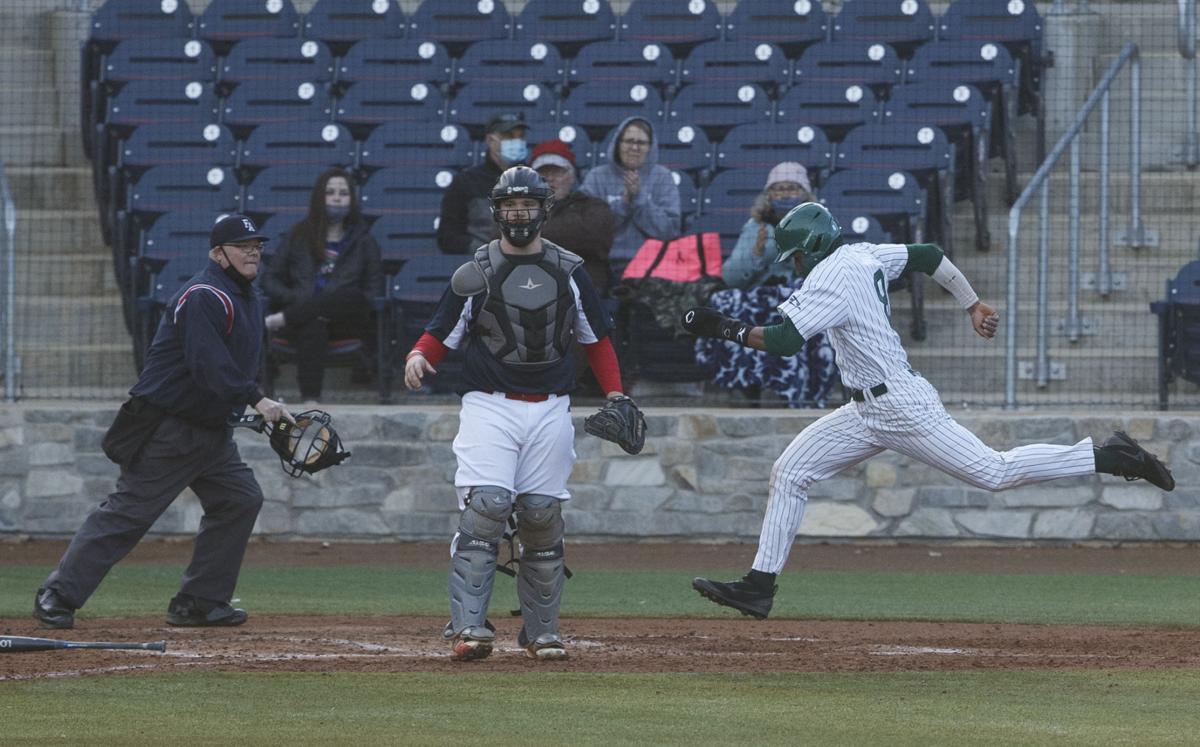 From an early age, baseball players are taught to back each other up in the field, just in case a ball gets past a teammate.

Elijah Lambros and Trendon Craig are strong prospects to hear their names called in the 2021 Major League Baseball First-Year Player Draft, which begins Sunday. If not, though, both local standouts have an admirable Plan B.

Lambros, who played at Fredericksburg Christian School this spring after helping Stafford win the 2019 VHSL Class 5 state championship, has a scholarship awaiting him at the University of South Carolina. Craig, a Washington & Lee High School graduate who starred at Louisburg (N.C.) Junior College, has signed a letter of intent with N.C. State, a 2021 College World Series participant.

Both players are outfielders listed at 6-foot-1 and 195 pounds. If drafted, they plan to weigh their potential signing bonuses against the value of their scholarships and the chance to be drafted even higher later in their careers.

“If I don’t hit my [projected draft] number, my worst-case scenario is South Carolina—and that isn’t even bad,” Lambros said. “Either way, I’m excited.”

Said Craig: “If it doesn’t work out, I’ve got a great backup plan. Either way it goes, I’m going to be fine.”

Lambros said his advisor, Jason Comte of SMC Sports Management, has heard he could be chosen anywhere between the third and 15th round of the three-day, 20-round draft. Louisburg coach Blake Herring said scouts project Craig to go between rounds 7–12.

“This decision will kind of dictate the rest of my life in a way,” Lambros said. “At least for the next five years.”

Both players have earned their spots as draft prospects and are quite familiar to pro scouts.

After starring on Stafford’s 2019 state championship team, Lambros transferred to FCS largely because the Eagles were coached by Jeff Petty, who also leads the Canes travel team on which Lambros plays.

Lambros batted .410 for the Eagles this spring, with five triples, one home run, 14 RBIs and 30 runs scored, striking out just six times in 24 games. Most of his national exposure came through travel tournaments and showcase events.

“He’s one of the top outfielders on the East Coast,” Stafford coach Tommy Harrison said. “He’s a five-tool kid with a huge upside.”

Craig, meanwhile, was named National Junior College Athletic Association Region 10 player of the year by the region’s coaches after batting .420 with 14 homers, 55 RBIs and 28 stolen bases in 41 games as a sophomore.

“He’s an all-around player,” Herring said. “He can hit for power, hit for average. He has speed, defensive ability. The only kink, if you could call it that, is that he doesn’t have the strongest throwing arm in center field. But that doesn’t limit him.”

Craig grew up in Atlanta, but he moved to Maryland with his mother as a teen and played for Riverdale Baptist. When that school dropped its powerful program in 2019, Craig landed at W&L and earned All-Area honors.

Even at small schools in Montross and Louisburg, word of his talent spread quickly.

“There were more scouts at our games this year than in any of my six years coaching here,” Herring said. “I can’t say they were at every game, but when they were here, the majority of their eyes were on him. They were interested in games, practices, they wanted to see him take batting practice.”

N.C. State, located roughly 30 miles from Louisburg, signed Craig last fall. The Wolfpack made a surprising run to the 2021 College World Series, but a COVID-19 outbreak ended their hopes three wins short of a title.

“It’s unfortunate that it happened,” Craig said, “but hopefully if I head there, I can help them get back to that position and maybe even win a national championship.”

Since their school seasons ended, both players have stayed busy. Lambros played for the Peninsula Pilots of the Gulf Coast League, a summer league for college players, and Craig suited up for Covington of the Valley League.

Both have spoken to representatives of most of the 30 pro teams. Craig grew up as an Atlanta Braves fan but said the Baltimore Orioles have shown particularly strong interest.

Neither player volunteered how much money or which round it would take to convince him to sign immediately, but playing professionally has been a lifetime goal for both.

Said Herring: “The reality is, [Craig] really wants to play pro ball, and if it’s the round and the money he wants, I think there’s a good chance he’ll sign.”

Lambros went even further. What are his goals?

“Not even the pros, but the Show,” he said, referring to the major leagues. “There are a lot of pros and cons between college and the draft, but if they give me my numbers, I think I will go.”

After a sophomore season in which she scored 53 goals, Culpeper High’s Faith Moore has been named to the Free Lance-Star’s All-Area girls lacr…

When all-district running back Riley Harrison went down with an injury during a game at Kettle Run last season, the Culpeper High football tea…

Eastern View’s boys and girls tennis teams each had one player named to the Free Lance-Star’s All-Area tennis team, which was announced Tuesday.

Eastern View’s Ashton King proved he was one of the best sprinters in the state at June’s Class 4 state track meet, posting runner-up finishes…

If patience truly is a virtue, then it would be hard to argue against Chase Smith as a shining example of such.

Fredericksburg Christian School’s Elijah Lambros takes a turn at bat during the team’s season opener at FredNats Ballpark in Fredericksburg on March 2.

Elijah Lambros (right) played this season with Fredericksburg Christian School. Next season, he may play college ball in South Carolina or suit up for the pros.