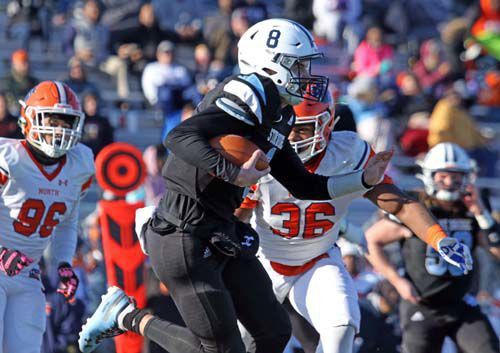 Stone Bridge quarterback Billy Wiles carries the ball during a Class 5 state semifinal game against North Stafford last December. Wiles and his mother, Holly, are spearheading a rally in Richmond on Monday to call on the Virginia High School League to reinstate fall sports immediately. 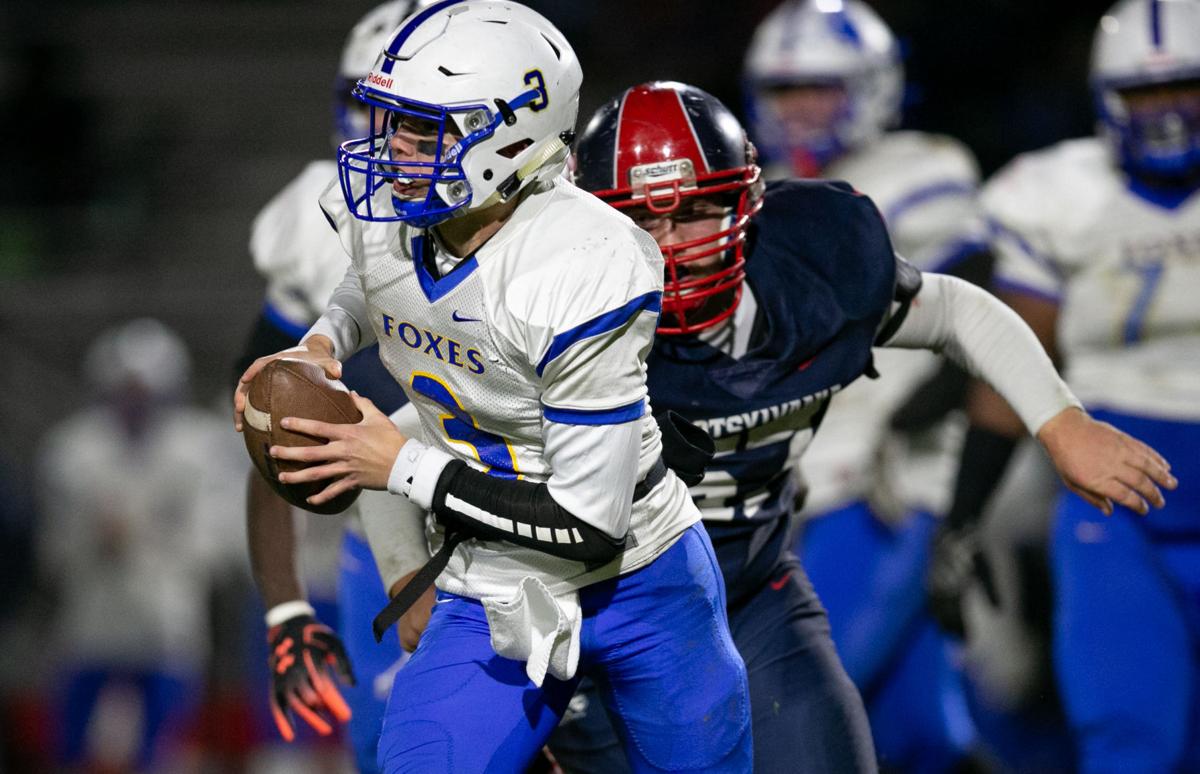 King George quarterback Charles Mutter scrambles against Spotsylvania during a game in Nov. 2019. Mutter and his mother, Stacy, will be participating in the “Let Them Play” rally on Monday at the state Capitol in Richmond. 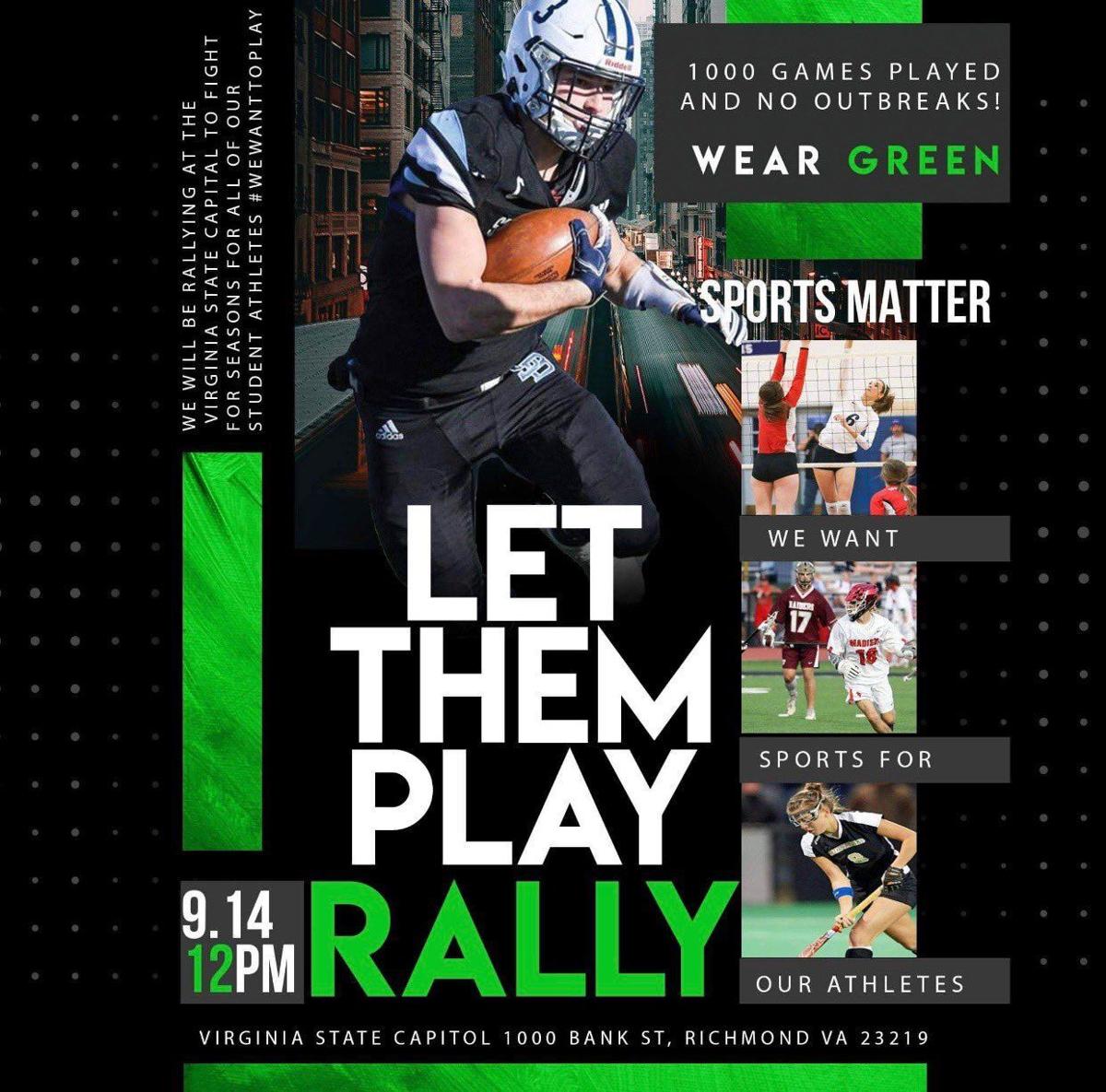 A graphic promoting Monday’s “Let Them Play” rally at the state Capitol in Richmond has been circulating throughout social media since last Thursday.

When the Virginia High School League voted in July to postpone fall sports to at least Feb. 2021, Leesburg resident Holly Wiles found herself in the same predicament as so many other parents of student-athletes across the state: disappointed and let down over the realization that something her child had worked so hard for was being taken away.

As it often does, though, inspiration came when it was least expected.

Last week, Wiles stumbled across a news story about a rally staged by coaches, athletes and parents in Michigan who were seeking the prompt reinstatement of fall sports despite the ongoing COVID-19 pandemic.

The protest, aptly titled “Let Them Play,” took place outside the Michigan Capitol building in Lansing on Aug. 28. Hundreds took part in it, and their passionate demonstration was enough to convince Gov. Gretchen Whitmer to issue an executive order on Sept. 3 that allowed organized sports in the state to resume last Wednesday.

In that moment, Wiles envisioned a similar scenario playing out in Virginia.

“I thought to myself, ‘We should do the same thing here and see what happens,’” Wiles said Saturday afternoon. “Five minutes later I posted a rallying cry on Facebook, and here we are.”

The result of Wiles’ call to action is Virginia’s very own “Let Them Play” rally, which will take place this Monday at noon in front of the state Capitol on 1000 Bank St. in Richmond.

Wiles, whose son Billy is a senior quarterback for Class 5 power Stone Bridge, said the response she’s received since her initial Facebook post on Wednesday has been greater than she could’ve anticipated.

“The [response] has been overwhelming,” she said. “I have talked to so many people around Virginia that feel the same way I do [regarding the VHSL postponing fall sports]. There is just a huge group of people that support this cause.”

Wiles is hoping for about 300 participants in Monday’s event, but she isn’t stopping there. She’s also started a petition on change.org calling for the VHSL to reinstate fall sports immediately, which had collected nearly 3,600 signatures by Saturday evening.

The VHSL Executive Committee is set to vote on its “Championships plus-1” schedule model on Thursday, which, if approved, would officially set the start of winter sports in December, fall sports in February and spring sports in April. Teams would only play 60 percent of their typical schedules, with truncated playoffs to follow.

“We think the protest and the petition are our best shots at [playing this fall],” said Billy Wiles, who has verbally committed to play college football at Tulane University beginning next year. “We need every Virginia athlete we can get [to participate in this].

”The government works for the people, therefore they must listen,” he concluded.

As of last Thursday, 33 states were still planning to play sports this fall. Seven of those had already kicked off their football seasons, while others, such as New Jersey and Louisiana, are gearing up for an October start.

“So many parents want their kids to be able to play ball,” said Stacy Mutter, a friend of Holly Wiles who will also be taking part in Monday’s rally. “It’s important to all the student-athletes, especially the seniors.”

Mutter’s son, Charles, trains with Billy Wiles during the offseason and is a senior quarterback at King George. Unlike Wiles, however, Mutter hasn’t ironed out his college destination.

”It’s important for uncommitted seniors to showcase their abilities,” said Charles Mutter, who holds scholarship offers from the College of William & Mary and Division II West Liberty (W.Va.) University. “That’s why this rally is so important. Seniors need this season to generate film for potential recruiters.

”I personally believe it’s possible to have a safe fall sports season, and it goes above just football to every other sport as well.”

With eight seniors on its roster, the Chancellor boys basketball team entered this season as the most experienced team in the Battlefield District.

Stone Bridge quarterback Billy Wiles carries the ball during a Class 5 state semifinal game against North Stafford last December. Wiles and his mother, Holly, are spearheading a rally in Richmond on Monday to call on the Virginia High School League to reinstate fall sports immediately.

King George quarterback Charles Mutter scrambles against Spotsylvania during a game in Nov. 2019. Mutter and his mother, Stacy, will be participating in the “Let Them Play” rally on Monday at the state Capitol in Richmond.

A graphic promoting Monday’s “Let Them Play” rally at the state Capitol in Richmond has been circulating throughout social media since last Thursday.