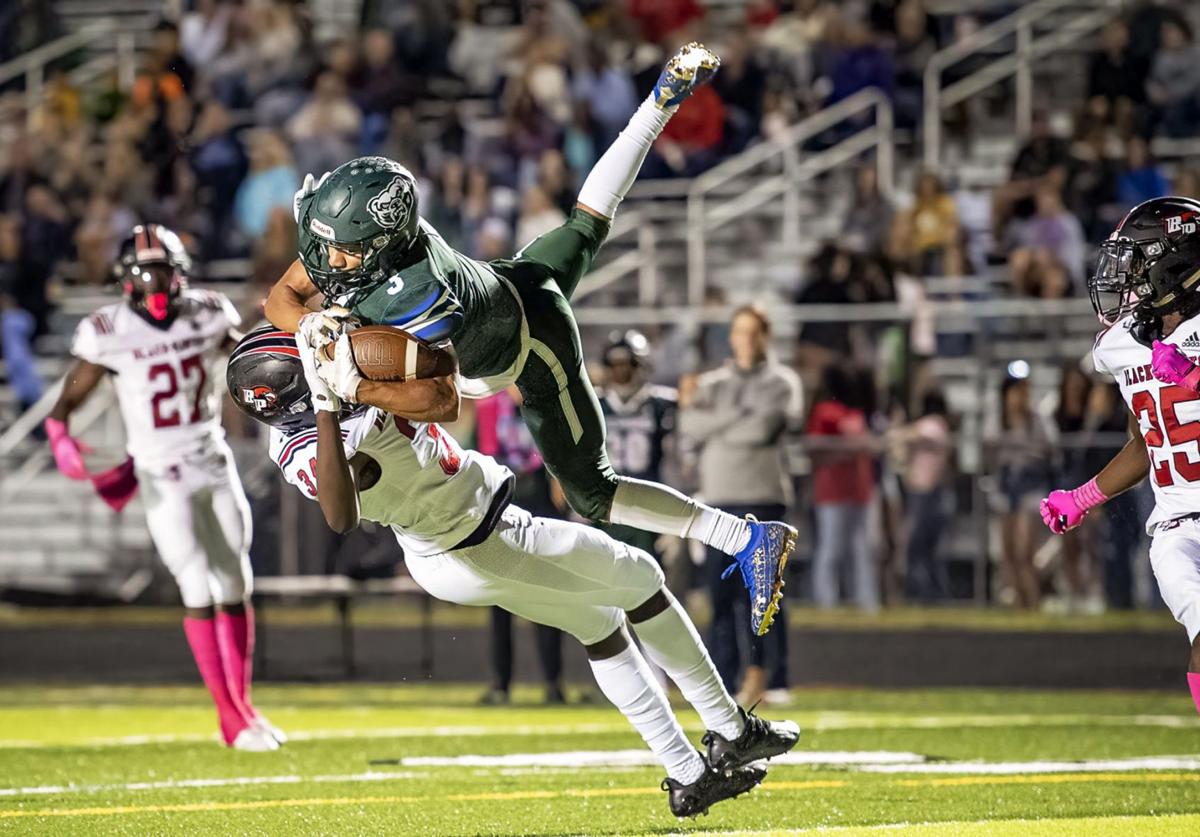 Riverbend’s Devin Washington (3) makes an acrobatic catch against Brooke Point on Oct. 1. The Bears topped the Black-Hawks 23–20 that night en route to a 9–3 season. 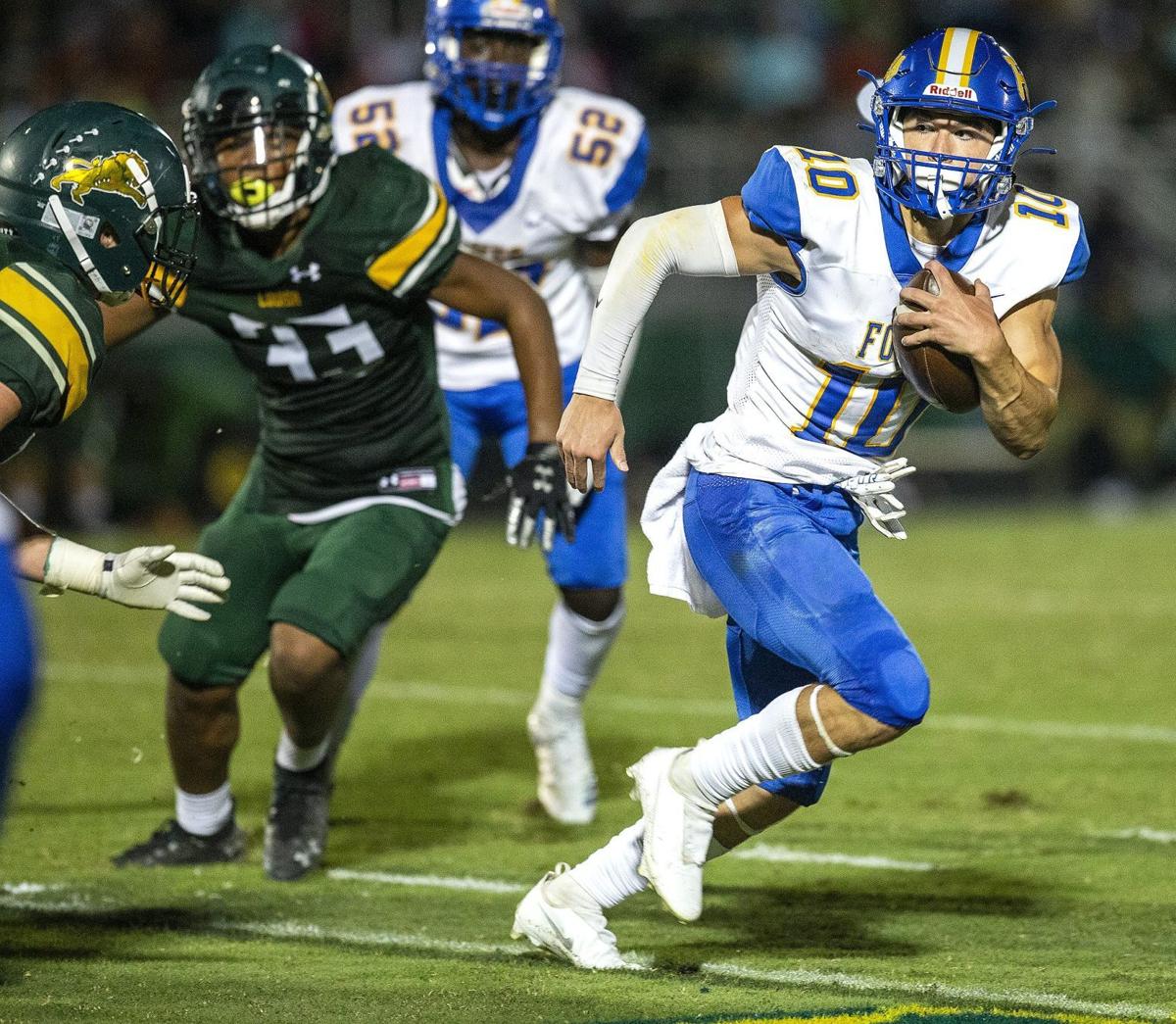 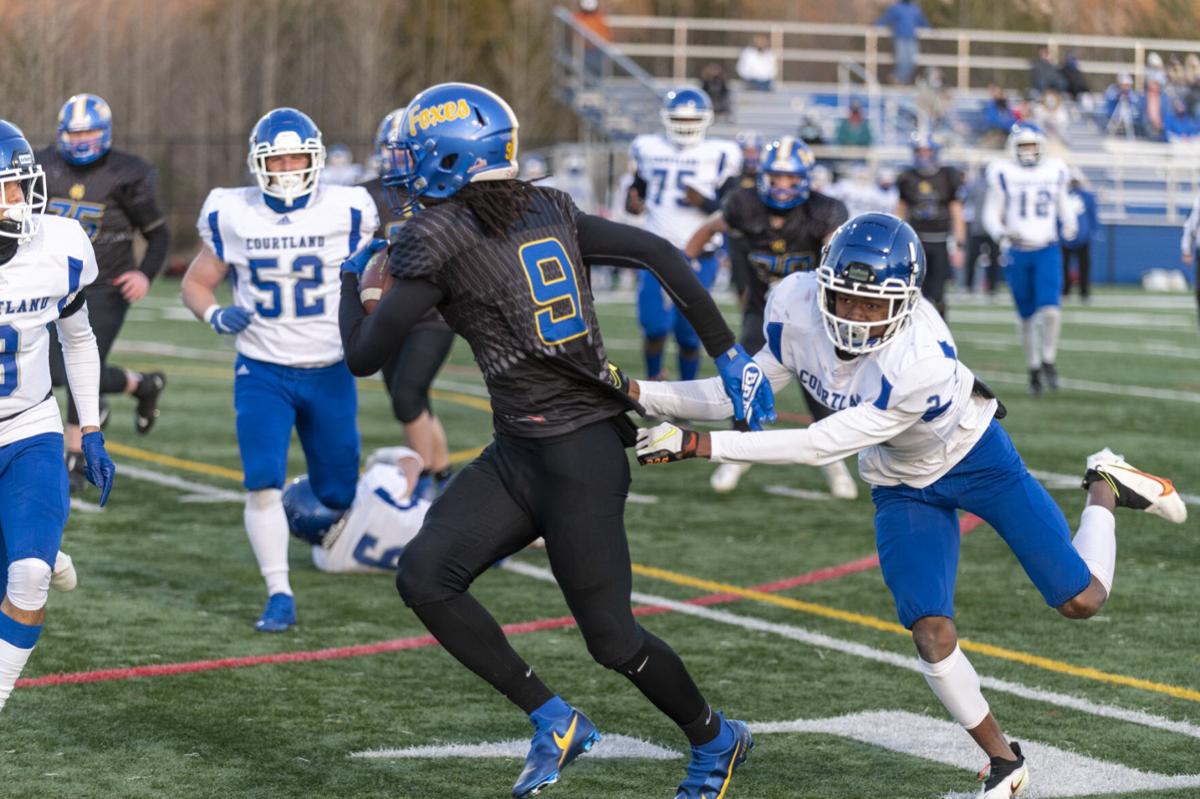 King George’s Chanz Wiggins breaks away from Courtland’s Sean Ray during a game on Nov. 5. 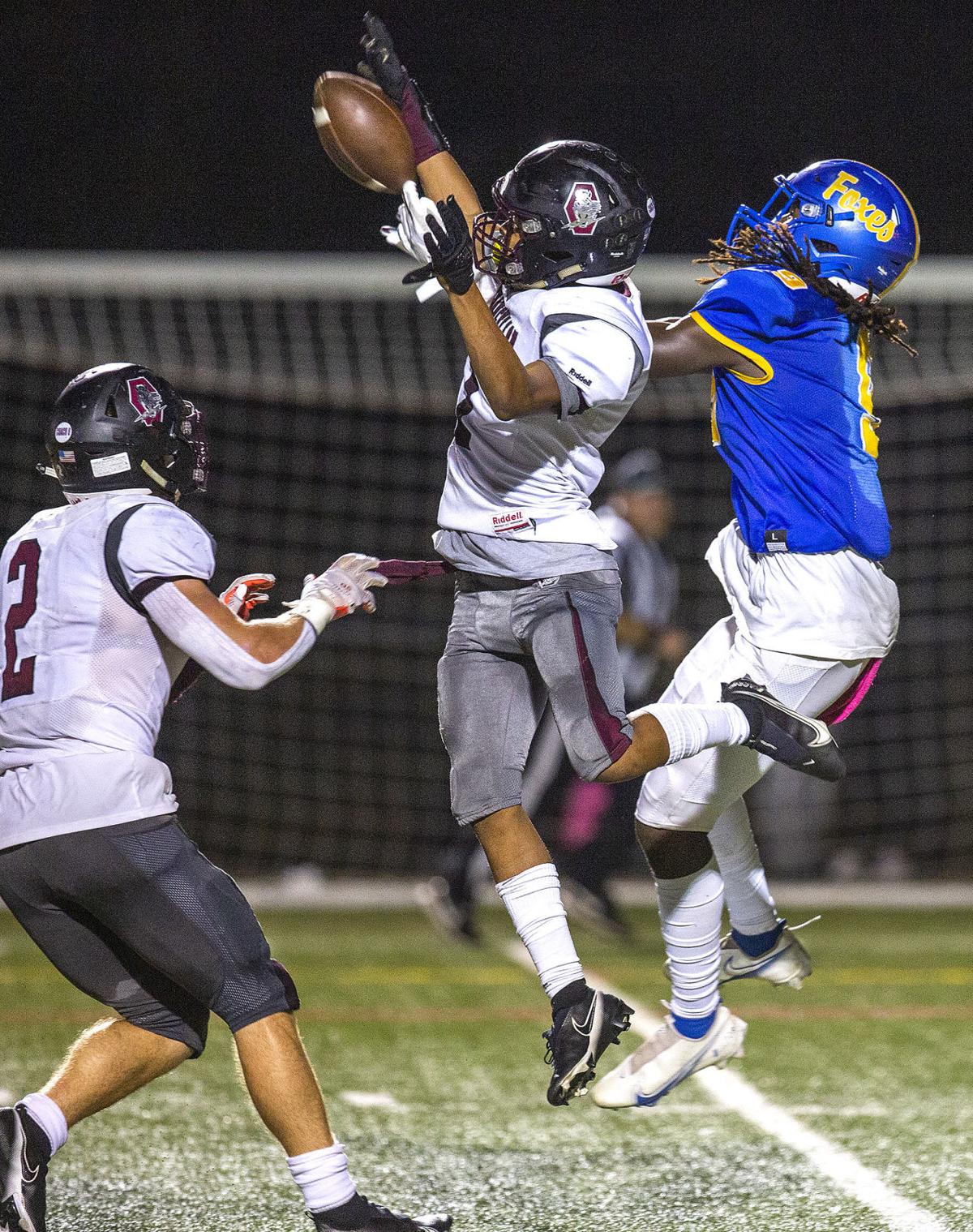 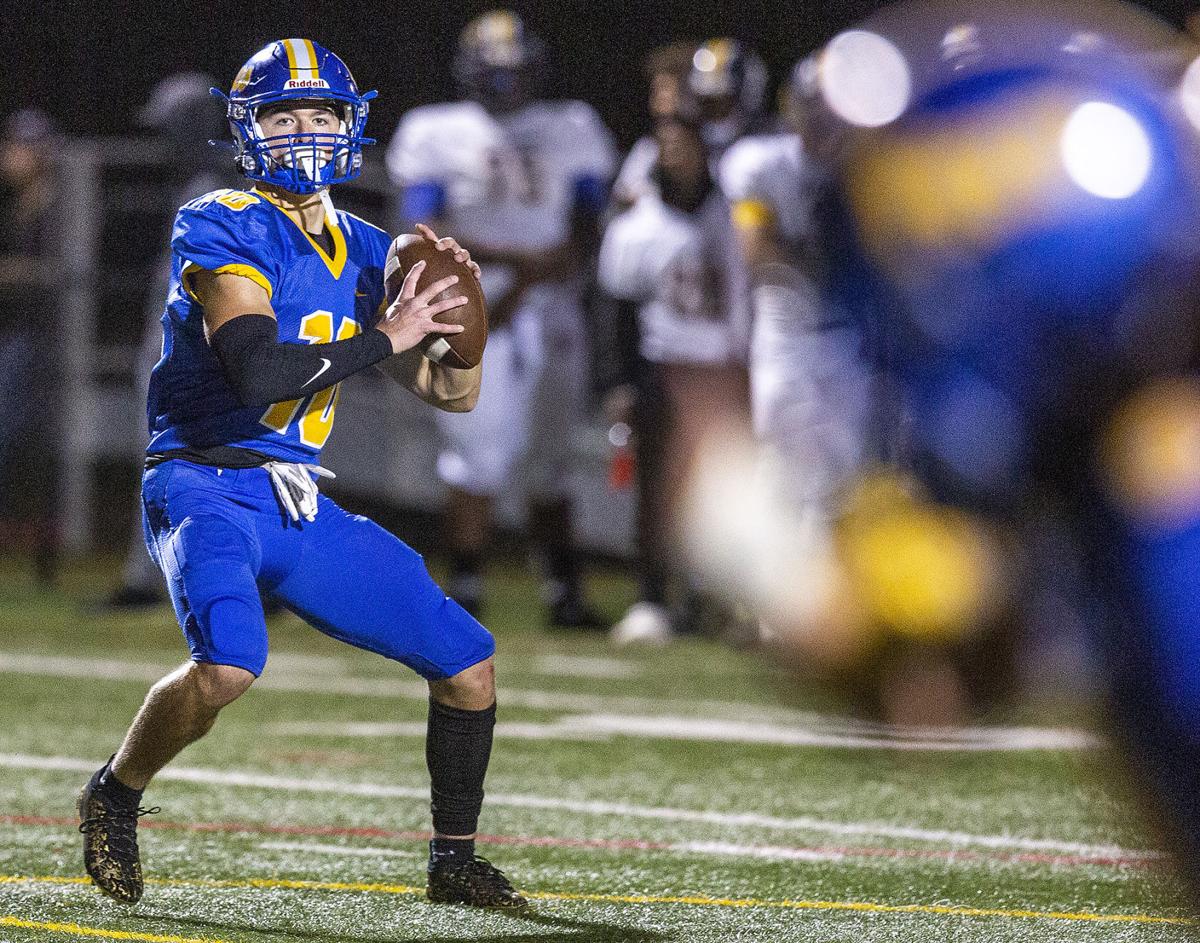 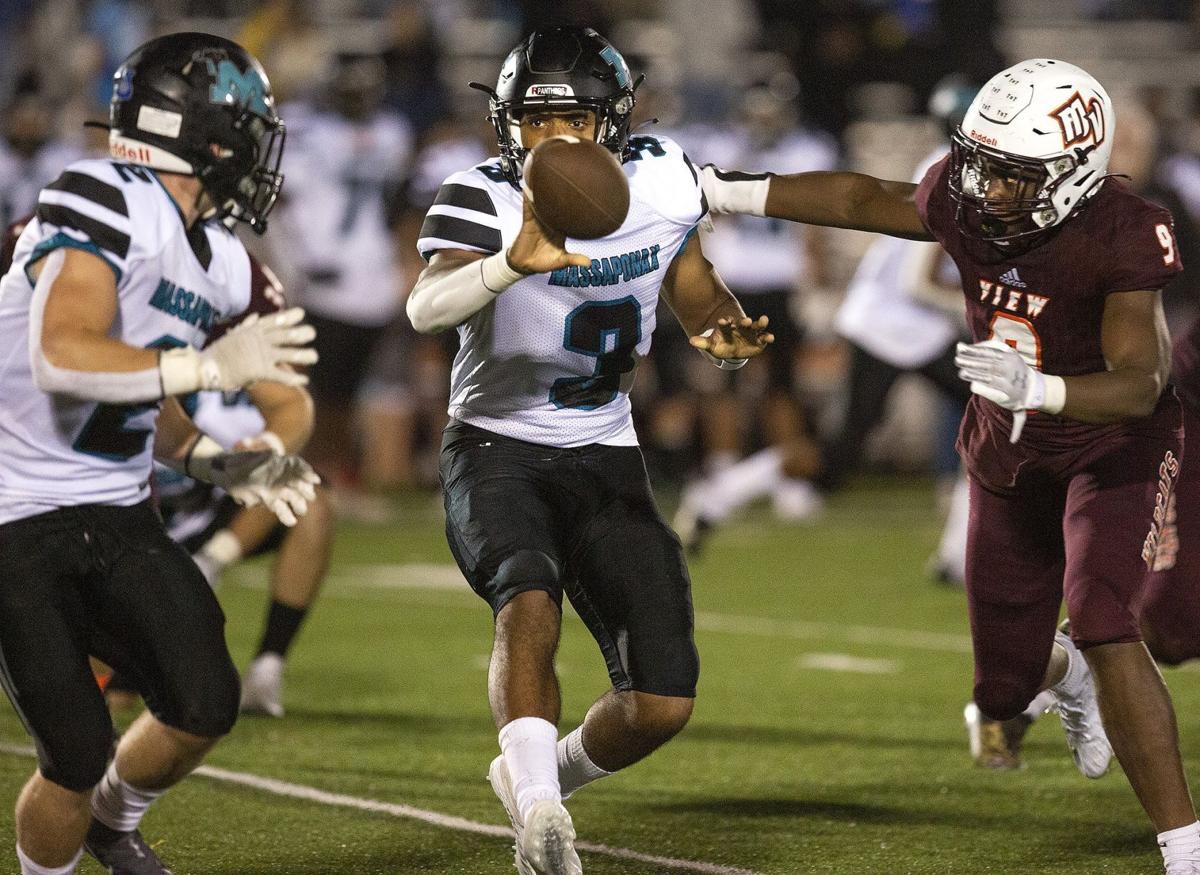 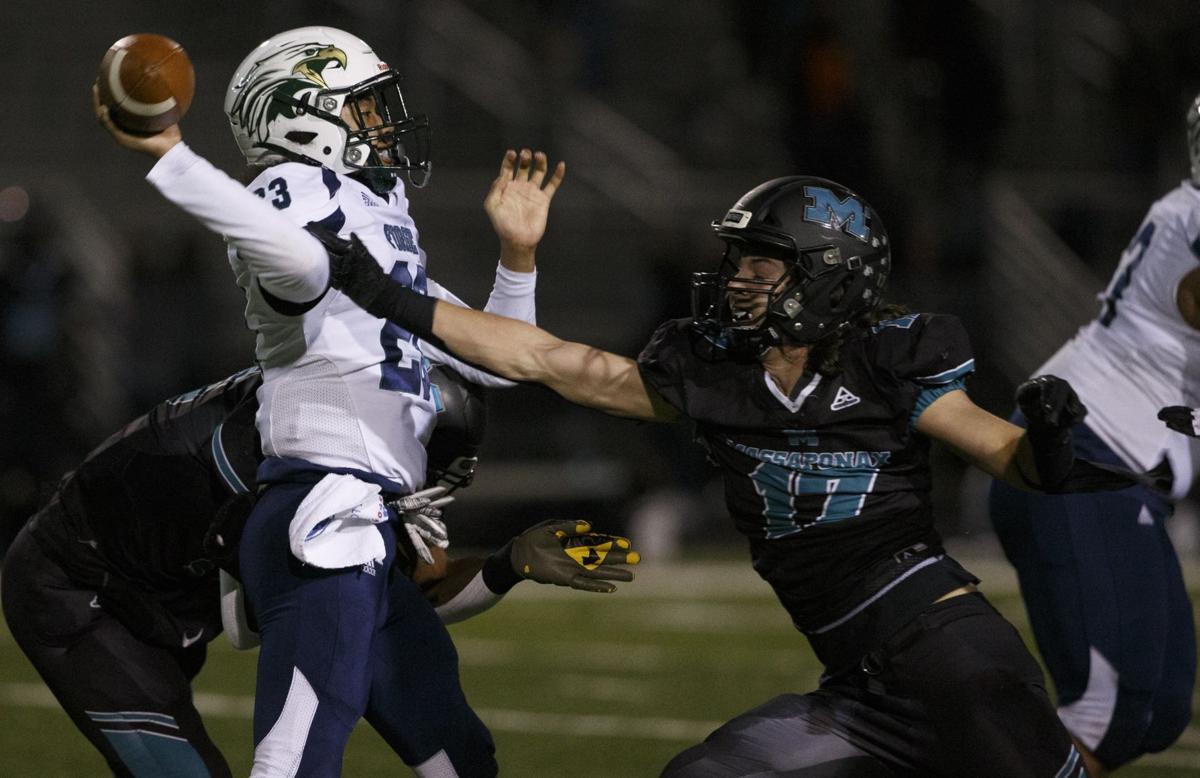 Mountain View’s Tyler Perry has provided power from the backfield. 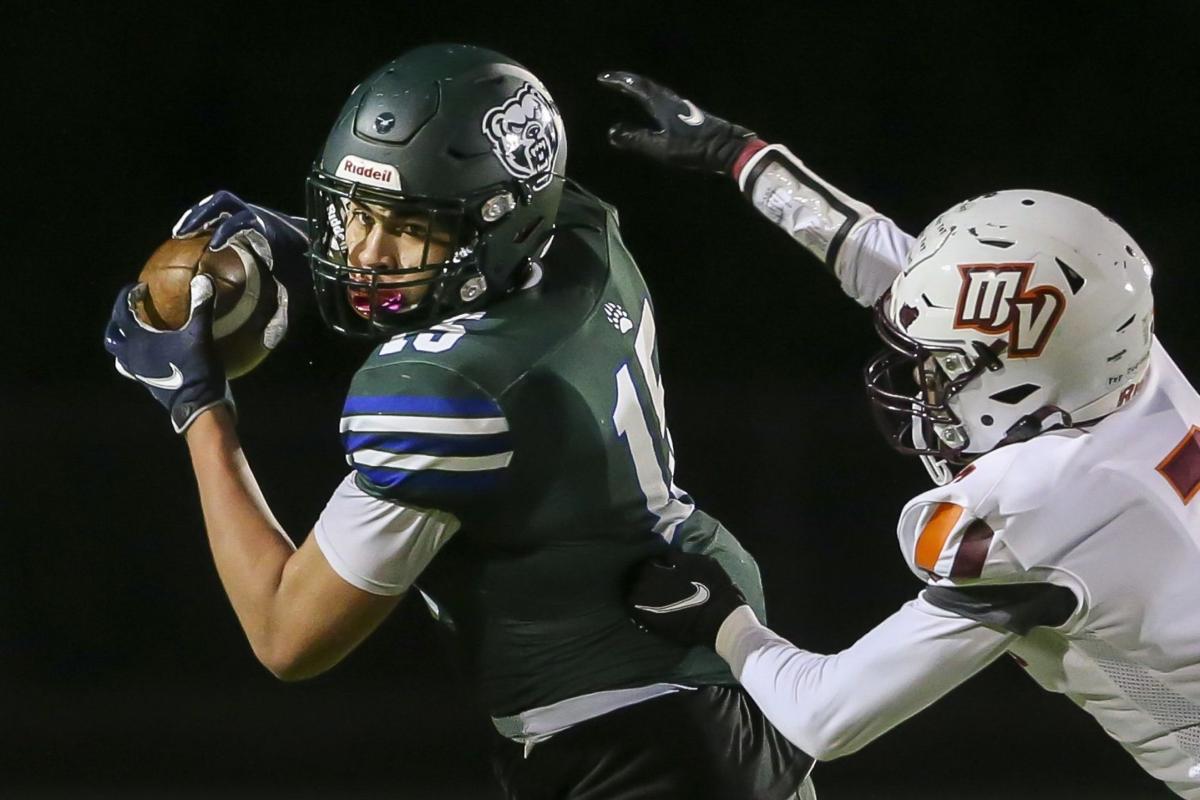 Mathias Barnwell (left) has another season of eligibility at Riverbend. 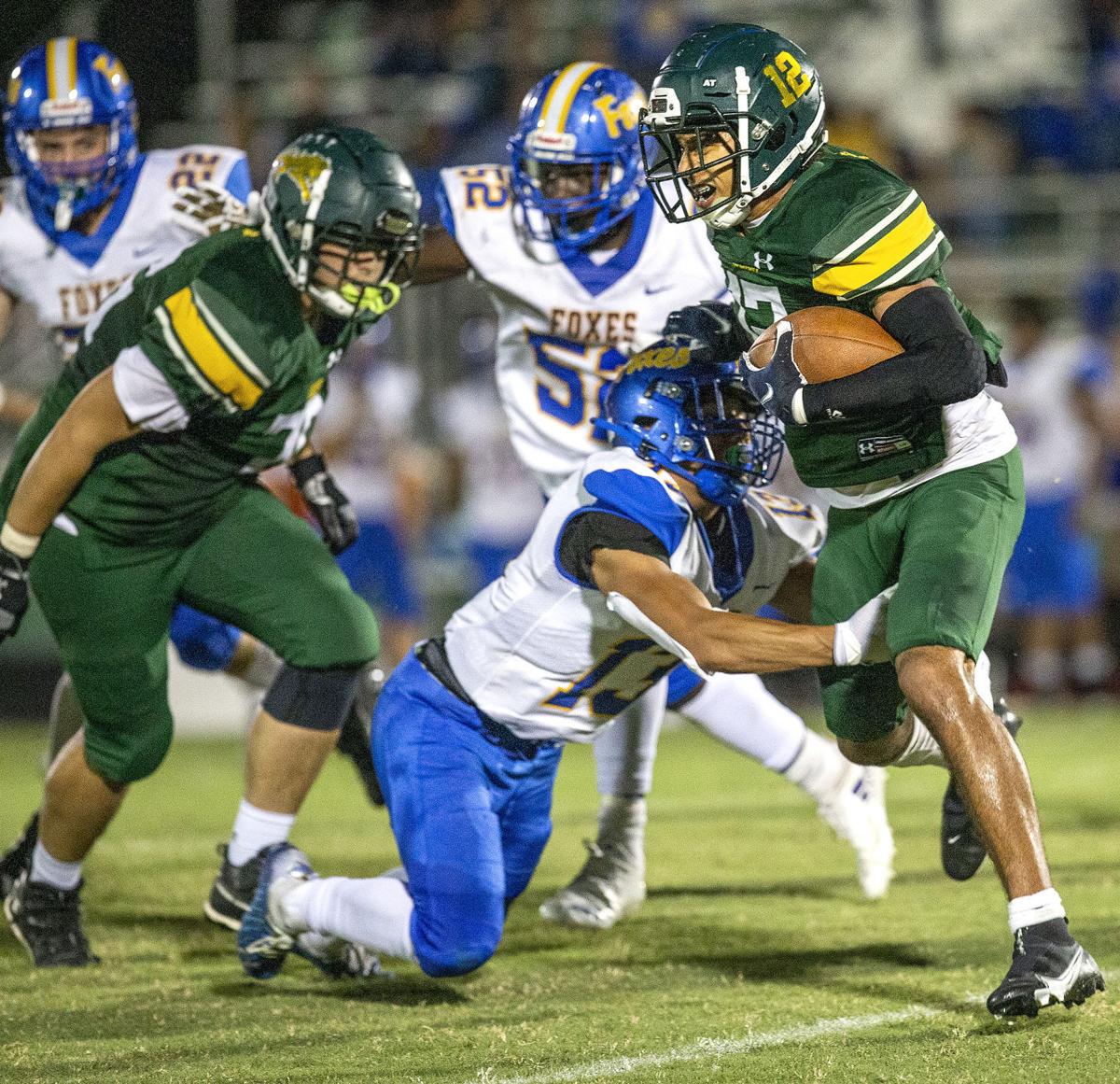 Jordan Smith of Louisa picks up yardage against King George in Mineral in September. 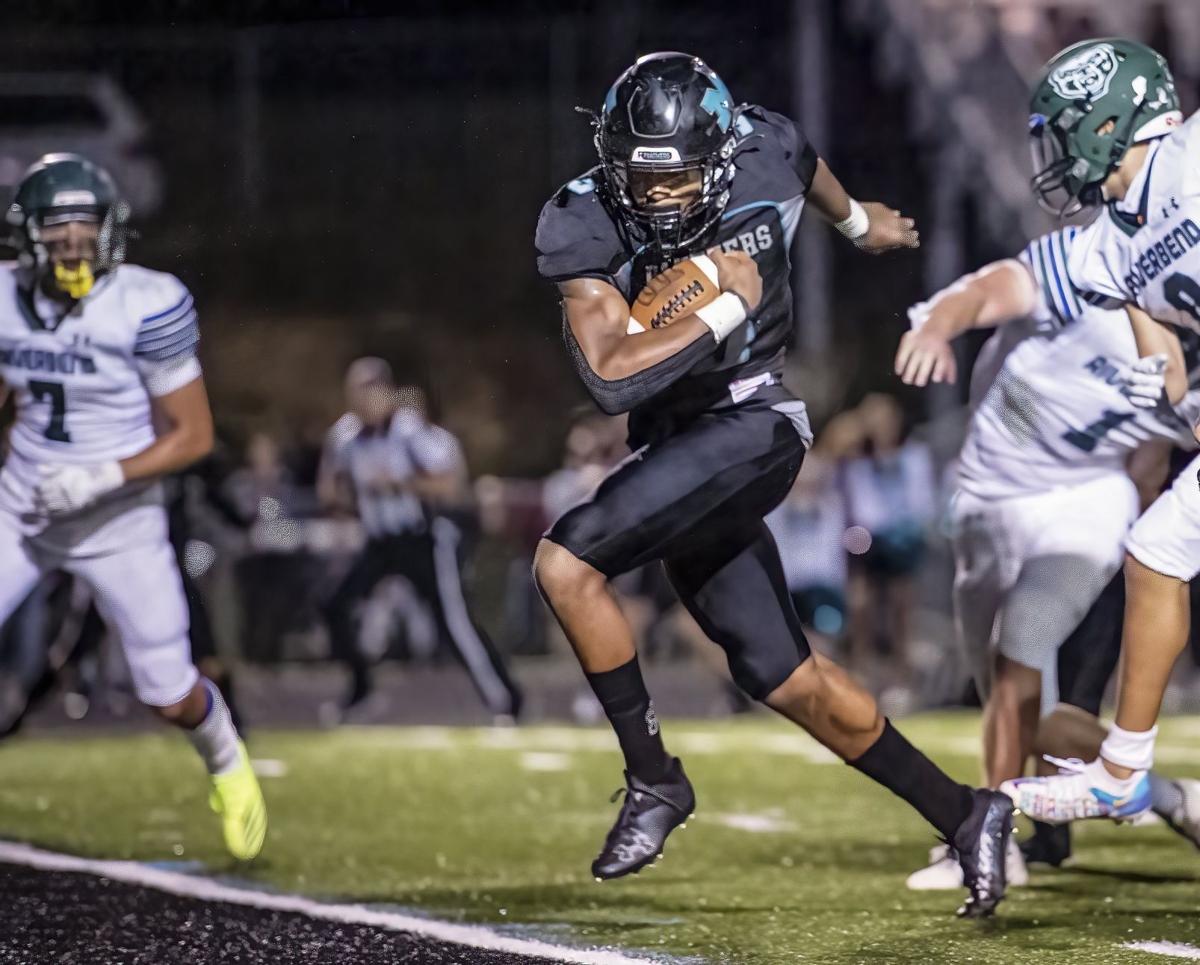 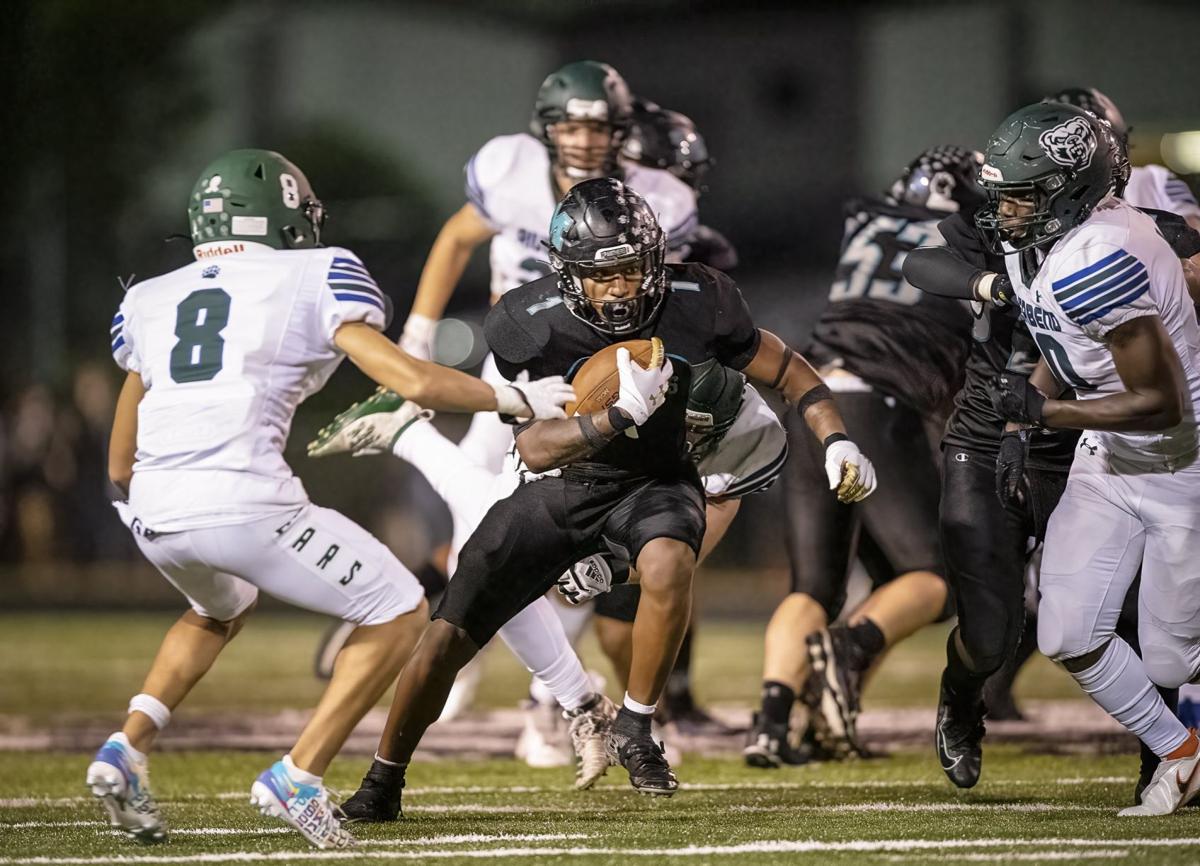 Tyheem Kimble (1) finished off a trick play against Riverbend. 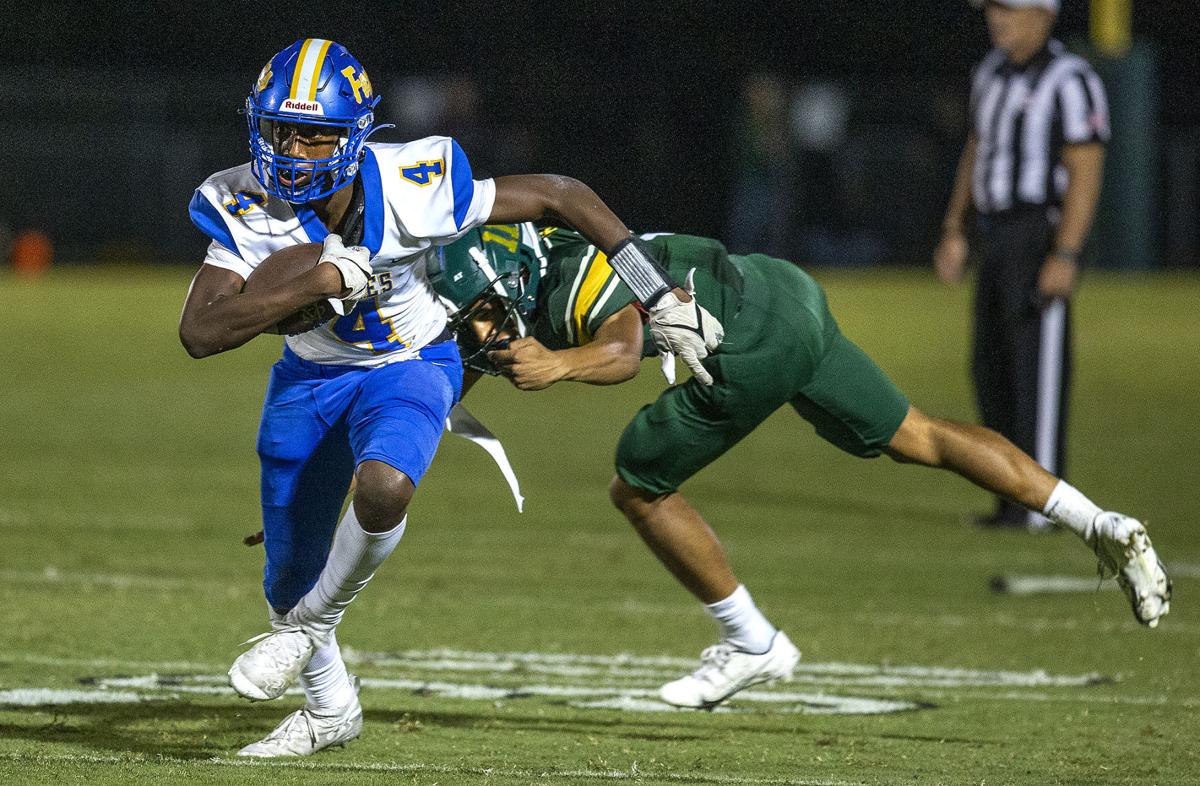 Maybe the in-laws don’t play nicely, or someone insisted on hosting. So, as you should be easing into a tryptophan-induced stupor on the couch watching football, you’re unbuttoning your jeans and trekking across town to a second feast.

Unlike two Christmases, wherein multiple celebrations entail more presents, there’s no upside to two Thanksgivings. Maybe you attempt to treat it like a prix fixe: stuffing and cranberry sauce early, dark meat and mashe d potatoes for the nightcap. Or, maybe the second meal is relegated to lesser status as a dessert-only affair.

Intentions aside, though, you know you’re going to fill up at the first table and politely eat through the motions at the second. Before you know it, it’s 7 p.m. and you can feel your pulse in your toes and fingertips. (Should I see a doctor?).

Fortunately, our appetite for high school football has no such limitations. This will forever be remembered as the year of two seasons. After missing out entirely in 2020 due to COVID-19, we were treated to an abridged, seven-game campaign this spring.

That was nice and all, but we all know that autumn weather is a key ingredient for Friday night lights. This fall’s action—the true main course if you will—couldn’t come quickly enough.

Local fans needn’t worry about splitting their allegiances this weekend: Mountain View is the lone Fredericksburg-area team still alive in the regional playoffs. On Friday at 1 p.m., the Wildcats (12–1) will take on Stone Bridge in Ashburn. The undefeated Bulldogs are tougher than breast meat that your mother-in-law insisted be cooked until the juices run clear.

Whatever your Thanksgiving plans, follow them by feasting on The Lancies, our salute to the very best in Fredericksburg-area high school football.

Streak snapperYou don’t venture into “The Jungle” and beat Louisa on its home field. Apparently no one told that to King George. In a rematch of last year’s Region 4B championship, the Foxes shocked the Lions, 33–15, snapping a 38-game regular-season winning streak that dated back to 2016.

Qyote of the year“King George, they’ve got some creatures, man.”

When the VHSL released its initial Region 6B playoff bracket, Colonial Forge wasn’t on it. That was news to the Eagles—and particularly former head coach Bill Brown—who had crunched the numbers several times and knew that Forge was in. Potomac was erroneously listed as the No. 8 seed in place of the Eagles, who in fact held the tiebreaker. Confident in the math, Colonial Forge reached out to the VHSL, which quickly issued a correction. No rounding error could deliver the Eagles from a first-round drubbing at the hands of undefeated Battlefield, though.

PerseveranceChancellor was the first (but far from the last) Fredericksburg-area team to see its season adversely impacted by COVID-19. The Chargers’ outbreak—which involved a full school closure for 10 days—prevented them from taking the field until Sept. 17.

Despite playing three games in an eight-day span to close out the regular season, Chancellor (5–6) qualified for the postseason in a tough Region 4B field. While a loss to King George in the first round made for a short trip to the playoffs, simply reaching them should be considered a win.

Best stat lineKing George quarterback Zach Ferguson tossed seven touchdown passes in an Oct. 1 win over Culpeper, setting school and Fredericksburg-area records in the process. The southpaw got right to work, as six of his scoring passes came before halftime.

Strangest seasonAfter missing its first three contests due to various COVID-19 situations, Massaponax was understandably eager to take the field Sept. 17 against Woodbridge.

In the third quarter, Vikings assistant coach Fred Moore collapsed on the sidelines and later died of a heart attack. The conclusion of the game was suspended for more than a month.

The tragedy added just another wrinkle in a Massaponax season that ultimately concluded with an upset loss to Patrick Henry–Roanoke in the first round of the Region 5D playoffs.

Worth the price of admissionMassaponax edged Riverbend, 34–28, in a game that featured multiple lead changes and came down to the final play. After quarterback Donte Hawthorne scored a 9-yard rushing touchdown with 34 seconds left, the Panthers intercepted a Riverbend pass to seal the outcome of a thrilling victory.

Play of the yearWith just seconds left until halftime in the above contest, Massaponax dug deep into its playbook. Hawthorne dropped back to pass and delivered a quick strike to Nathaniel Quance. Quance pivoted and pitched the ball to running back Tyheem Kimble, who shot down the sideline to complete an optimal rendition of the hook and ladder. The score tied the game at 14–14 going into the break.

Watch out for next seasonKing George: The Foxes will return Ferguson at quarterback, along with a pair of Division I recruits in rising junior receivers White and Wiggins.

Riverbend: You’re telling me that Mega Barnwell is a junior? Well then.

"This leg will never be what it used to be", but Tiger is 'on the positive side'

"This leg will never be what it used to be", but Tiger is 'on the positive side'

Orange County kept within striking distance in the first half, but second-seeded George Washington-Danville held the visiting Hornets scoreles…

King George junior quarterback Zach Ferguson was struggling throughout the Foxes’ Region 4B quarterfinal against visiting Chancellor on Friday night.

Riverbend’s Devin Washington (3) makes an acrobatic catch against Brooke Point on Oct. 1. The Bears topped the Black-Hawks 23–20 that night en route to a 9–3 season.

King George’s Chanz Wiggins breaks away from Courtland’s Sean Ray during a game on Nov. 5.

Mountain View’s Tyler Perry has provided power from the backfield.

Mathias Barnwell (left) has another season of eligibility at Riverbend.

Jordan Smith of Louisa picks up yardage against King George in Mineral in September.

Tyheem Kimble (1) finished off a trick play against Riverbend.