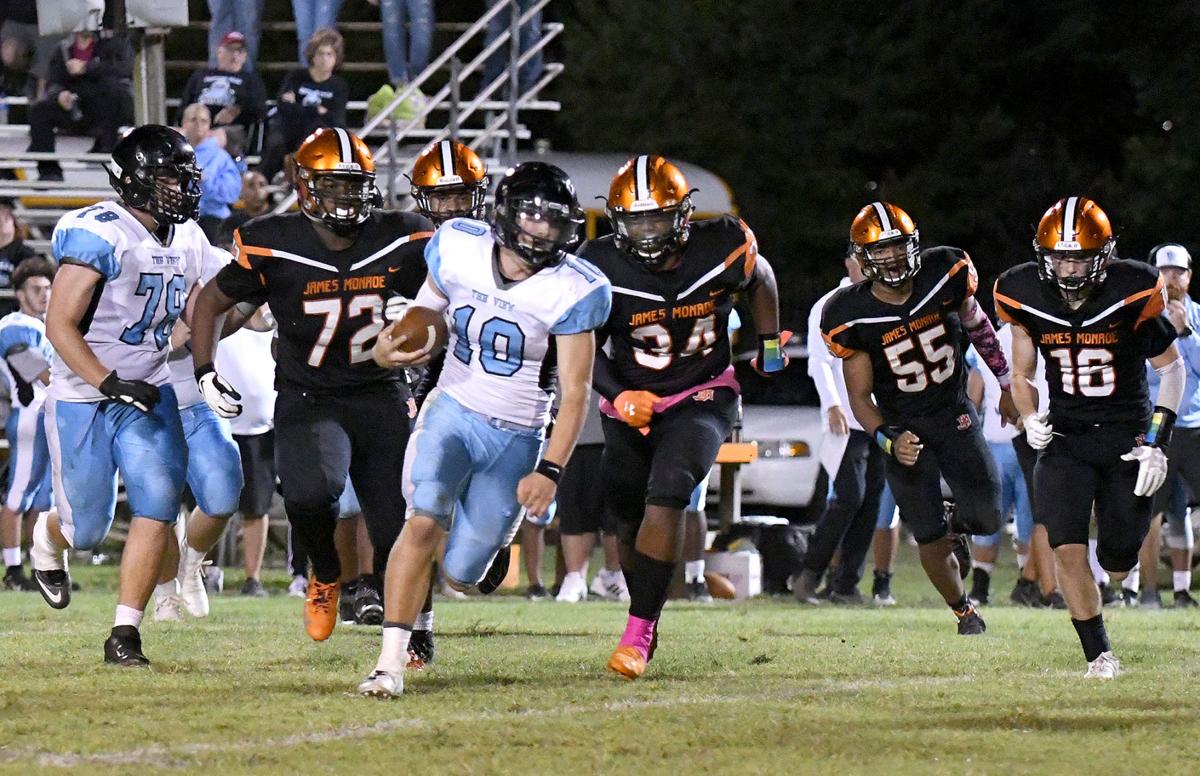 Eastern View quarterback Till Butler scrambles for yards as he is pursued by a host of James Monroe defenders during last year’s game at Maury Stadium in Fredericksburg. 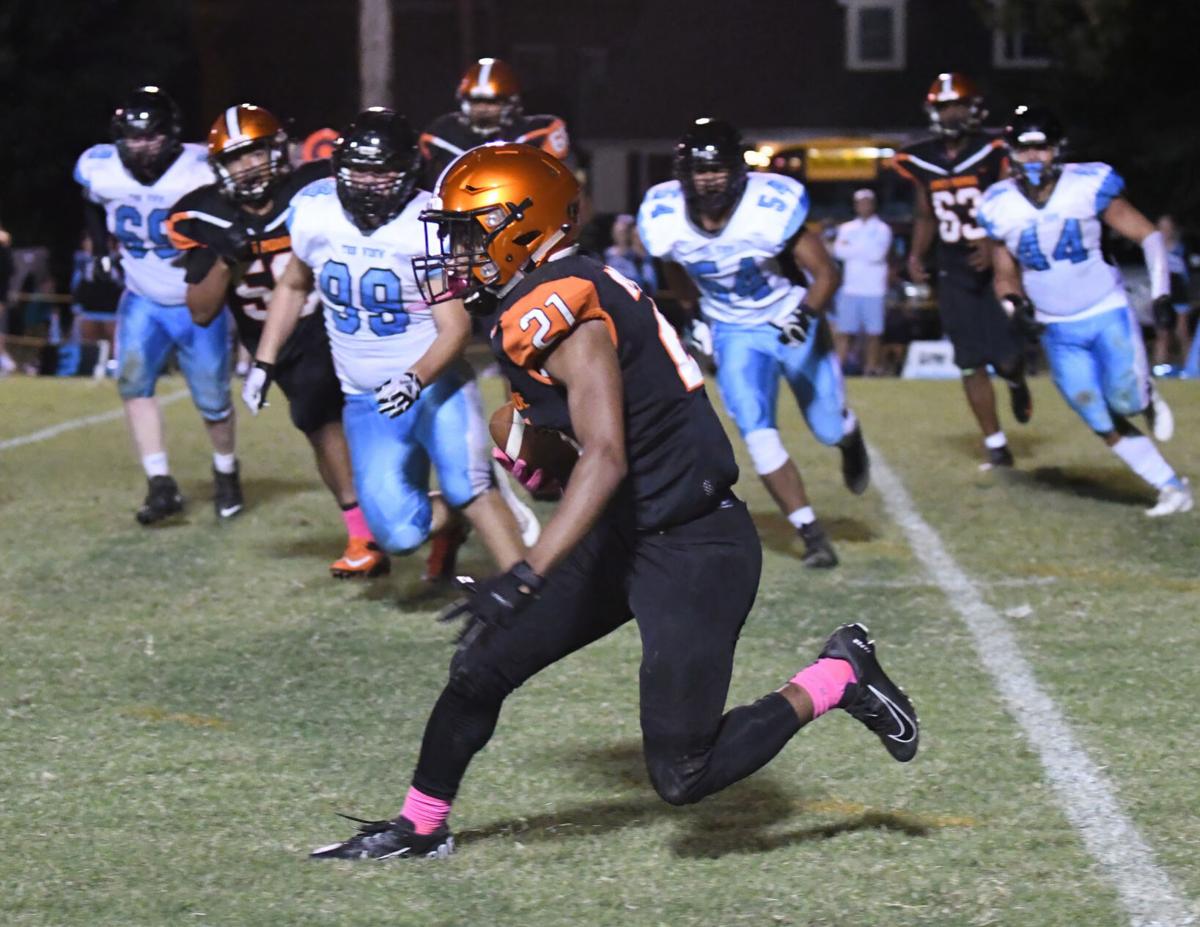 James Monroe’s Jawuan Fauntleroy runs for a first down against Eastern View during last season’s game at Maury Stadium in Fredericksburg.

The athletic directors at each of the district’s seven schools—Caroline, Chancellor, Courtland, Eastern View, James Monroe, King George and Spotsylvania—officially finalized the schedule for the upcoming football season earlier this week, giving everyone a first look at the road map for the unconventional campaign.

The Battlefield’s schedule release came less than a week after the VHSL Executive Committee voted 33-0 in favor of approving “Championships +1” at a special session held on Sept. 17. The passing of that proposal set next February as the official start date for fall athletics.

“We started putting this together when the VHSL first introduced ‘Championships +1’ last month,” Eastern View AD Mark Settle said of the district slate. “We wanted to hit the ground running once the Executive Committee made it official.”

Per the approved calendar, football practices will begin on Thursday, Feb. 4, and the regular season will kick off on Monday, Feb. 22. Teams will play six games—just 60 percent of their typical schedule—over a seven-week span between then and Friday, April 2.

With only six regular-season contests, every Battlefield squad will face a slate loaded with nothing but district opponents.

The full schedule is as follows:

Eastern View, which is a combined 75-12 with five district championships and a region title over the past seven years, must replace some key players from last season’s 10-2 team if it hopes to maintain its streak of dominance.

However, running back Raq Lawson is set to return to the Eastern View lineup, and he’ll be toting the pigskin behind a veteran offensive line.

Lawson, a junior, was a first-team all-Battlefield selection after rushing for 942 yards and 10 touchdowns last fall.

A three-year starter, Hoskin was a first-team all-district pick on both the offensive and defensive fronts in 2019.

While two of the Cyclones’ first three games are on the road, they do have home matchups with JM and King George—a pair of squads with serious district championship aspirations.

Eastern View head coach Greg Hatfield pointed out that, while his Cyclones do get the Yellow Jackets and Foxes at home, the entire concept of home-field advantage has been altered by coronavirus precautions.

“Who knows what playing at home will look like by that time?” Hatfield said. “We’ve had such a great home-field advantage over the years, but I don’t know how well that will translate with limited capacity in the stands.”

James Monroe, which finished 9-4 overall and tied with Eastern View and Spotsylvania for the Battlefield title a year ago, has been bitten by the transfer bug as of late.

Smith’s decision came little more than a month after classmate Jordan Hall, a second-team all-district pick at linebacker in 2019, opted to transfer to IMG Academy in Bradenton, Fla.

Hall, who racked up 93 tackles (19 for loss) and forced three fumbles as a freshman, had already garnered scholarship offers from Virginia, Virginia Tech, Old Dominion, Maryland, Penn State and Mississippi State prior to his departure.

Despite those losses, JM still has plenty of talent in the cupboard.

Ryan, who will play defensive back at UVA, took home first-team all-Battlefield honors on both offense and defense last season. Despite splitting snaps at quarterback with Smith, he still passed for 1,047 yards and 10 touchdowns.

King George, which went 6-5 a year ago, brings back several standouts from that team.

The Foxes will be led by senior quarterback Charles Mutter, who threw for 1,960 yards and 17 scores last fall on his way to second-team all-district accolades. While he remains undecided on where he’ll play at the next level, Mutter currently holds offers from William & Mary, Frostburg State (Md.), West Liberty (W.Va.), West Virginia State, Bridgewater College and Christopher Newport,

In addition to Mutter, King George will have seniors Javon Campbell, Chris Cox, Von Whiting and Mac Bitto back as well.

A versatile athlete who can line up anywhere on the field, Campbell was a first-team all-Battlefield selection at running back in 2019.

Cox earned second-team recognition at wide receiver after leading the Foxes with 400 yards receiving and hauling in three touchdown receptions, while Whiting chipped in 392 yards and a team-high five scores.

Bitto, a first-team all-district selection on the offensive line and a second-team pick at defensive end, is considered the anchor of both of those fronts.

Junior linebacker Kyle Reviello returns after taking home first-team all-Battlefield honors at the position as a sophomore. Behind him, Campbell, Cox and Gary Lane will once again patrol the secondary.

“We’ve got a lot of good football players,” King George head coach Vern Lunsford said. “We have a lot of depth on both sides of the ball, and we’re excited to get going.”

Elsewhere, Chancellor will look to build on last season’s 5-5 mark behind senior quarterback Trevin Edwards, who passed for 1,514 yards and 14 touchdowns.

Edwards has two veteran offensive linemen to help keep him clean, as seniors Andrew Nickens and Auston Hall are both back after garnering second-team all-Battlefield accolades.

Courtland, which suffered through a 1-9 campaign in 2019—its worst in 21 years—brings back most of its backfield from that squad.

The Cougars should also be buoyed by the addition of several players from their junior varsity team, which won the district a season ago.

Spotsylvania, which snapped Eastern View’s 44-game winning streak and finished 7-4 last year, has been dealt two major blows with the transfers of star players to other Spotsylvania County schools.

Sophomore Mathias “MEGA” Barnwell, who committed to Penn State in June, decided to migrate to Riverbend about a month after that, leaving huge holes for the Knights along both the offensive and defensive fronts.

The other big loss for Spotsylvania came when senior running back Ty-Shaun Colbert, who led the Battlefield with 1,354 yards and 21 scores on the ground in 2019, opted to switch over to established county powerhouse Massaponax.

At Caroline, third-year head coach Doug Allison is hoping to improve on a pair of 1-9 campaigns. The Cavaliers have not qualified for the postseason since 2013, and their last winning record came way back in 2008, when they finished 6-4.

Following the conclusion of the regular season, the top four squads in each region will advance to the regional playoffs—a number that is cut in half from the usual eight in most regions.

Coaches believe the condensed regular-season and regional formats could make for a playoff-like atmosphere across the board beginning in Week 1.

“With only six games, [the season] is going to be a rough sprint,” Hatfield said. “I think we’re going to see a Wild West shootout right from the start.”

“It’s absolutely critical that we be ready to go from the beginning,” Lunsford added. “There’s not going to be any margin for error.”

Culpeper's Riley Harrison has a nose for the ball

With the Culpeper football team clinging to a slim lead late in the third quarter of a game against visiting Monticello last season, Riley Har…

For months, football players and coaches at Woodberry Forest have followed strict COVID-19 protocols. The hard work was rewarded Friday as the school announced a shortened fall season, which will start next Saturday.

Eastern View quarterback Till Butler scrambles for yards as he is pursued by a host of James Monroe defenders during last year’s game at Maury Stadium in Fredericksburg.

James Monroe’s Jawuan Fauntleroy runs for a first down against Eastern View during last season’s game at Maury Stadium in Fredericksburg.