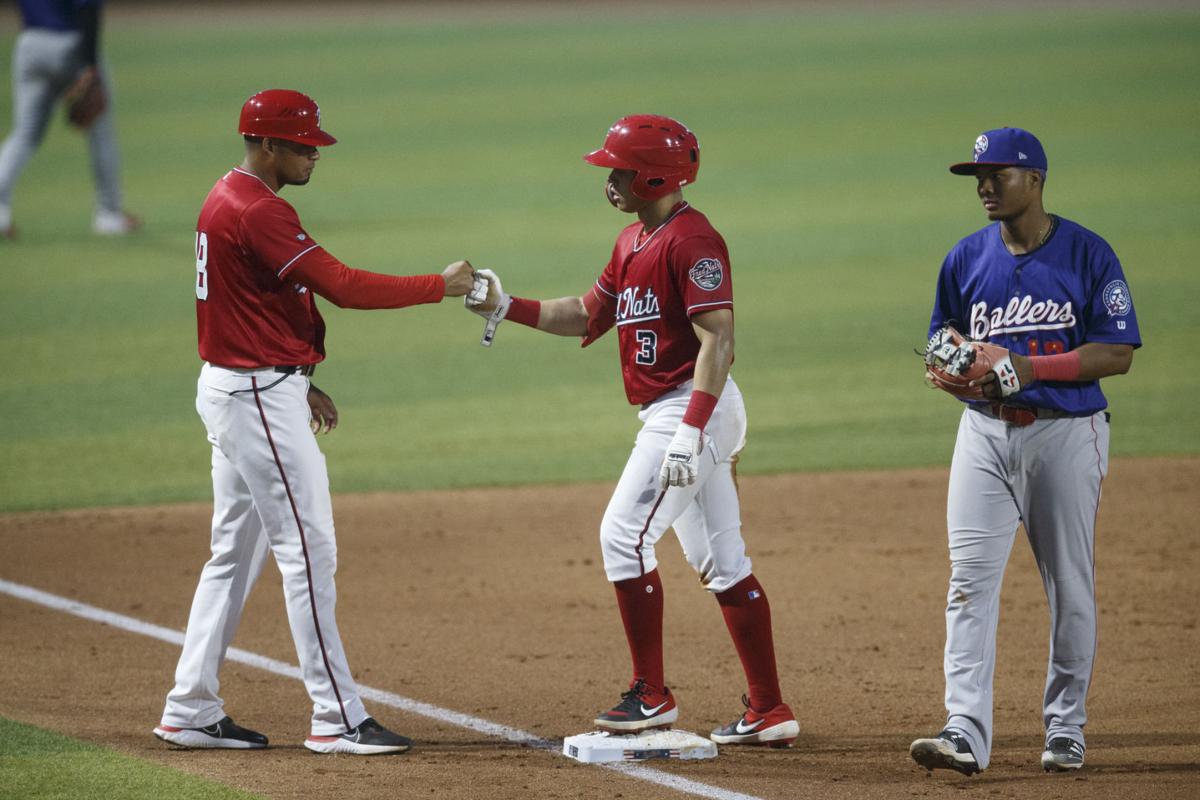 FredNats manager Mario Lisson fist-bumps Ricardo Méndez after he hit a triple against Kannapolis on July 6. 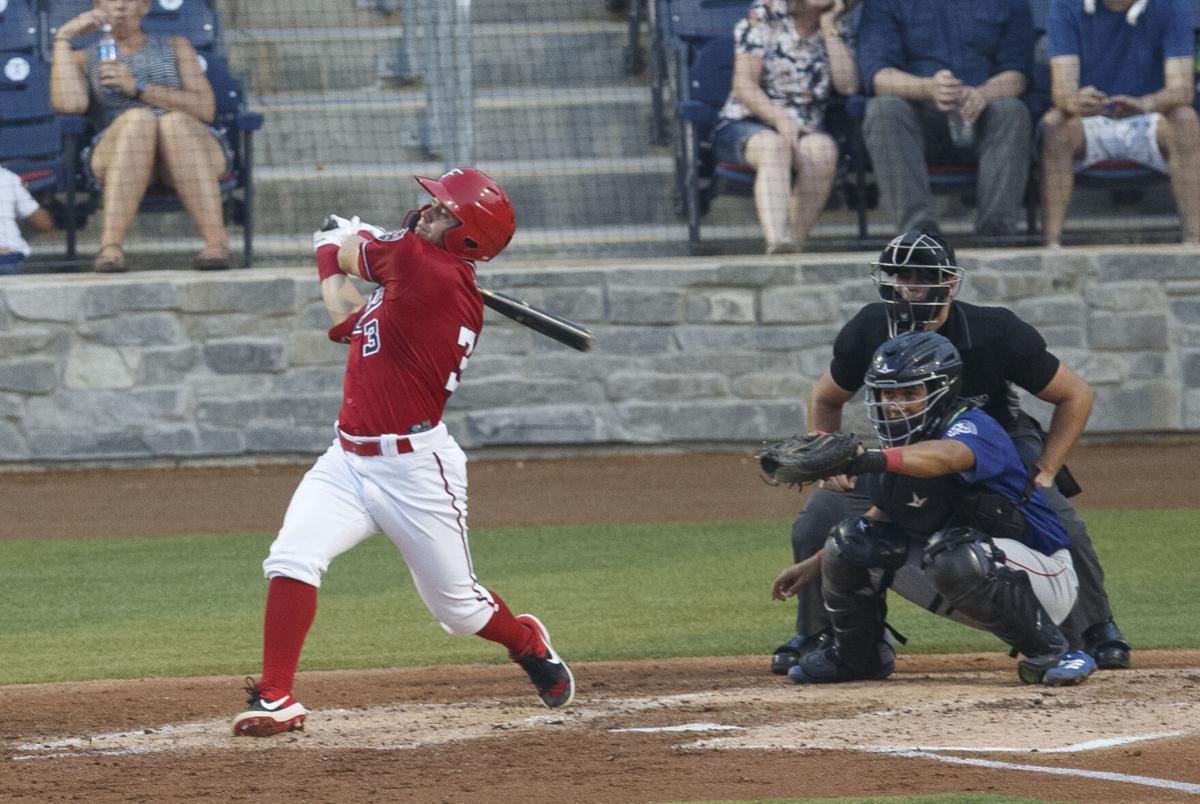 Ricardo Méndez’s 17-game hitting streak is by far the longest in the FredNats’ first season. 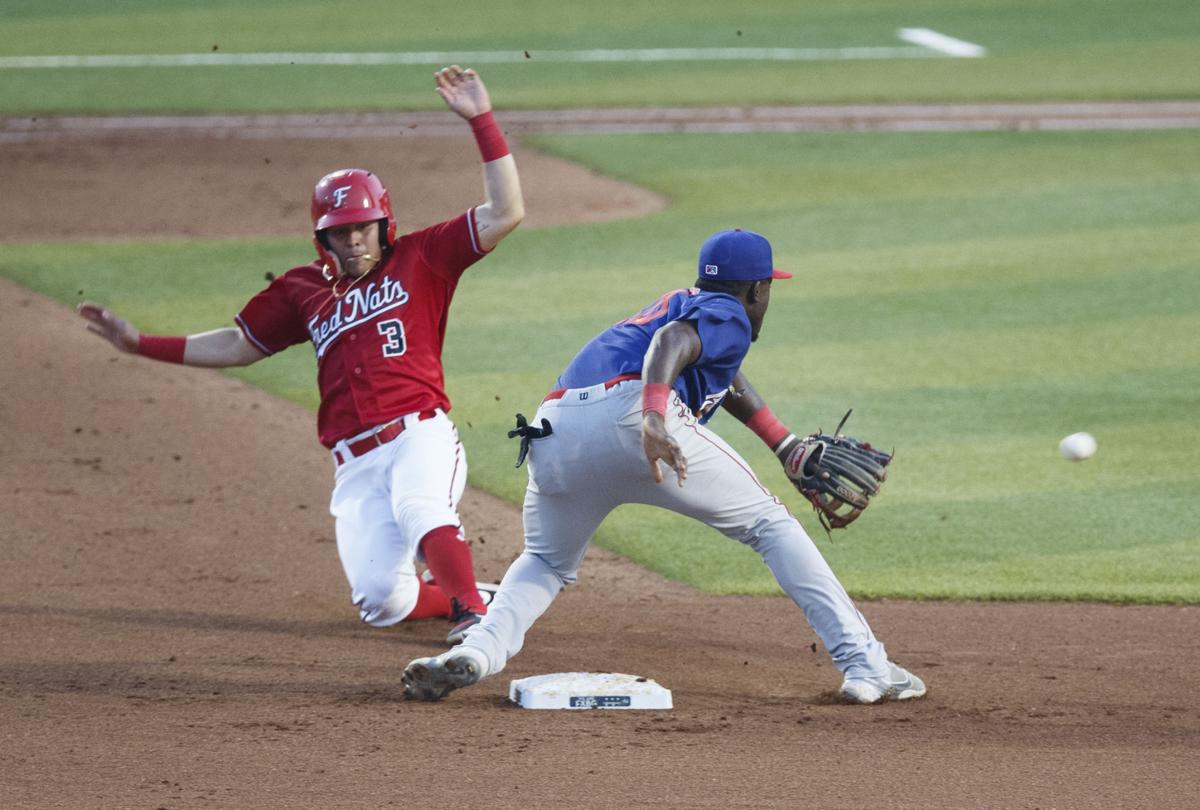 Méndez has gotten plenty of chances to run bases thanks to the 17-game hitting streak he took into Tuesday night’s game. 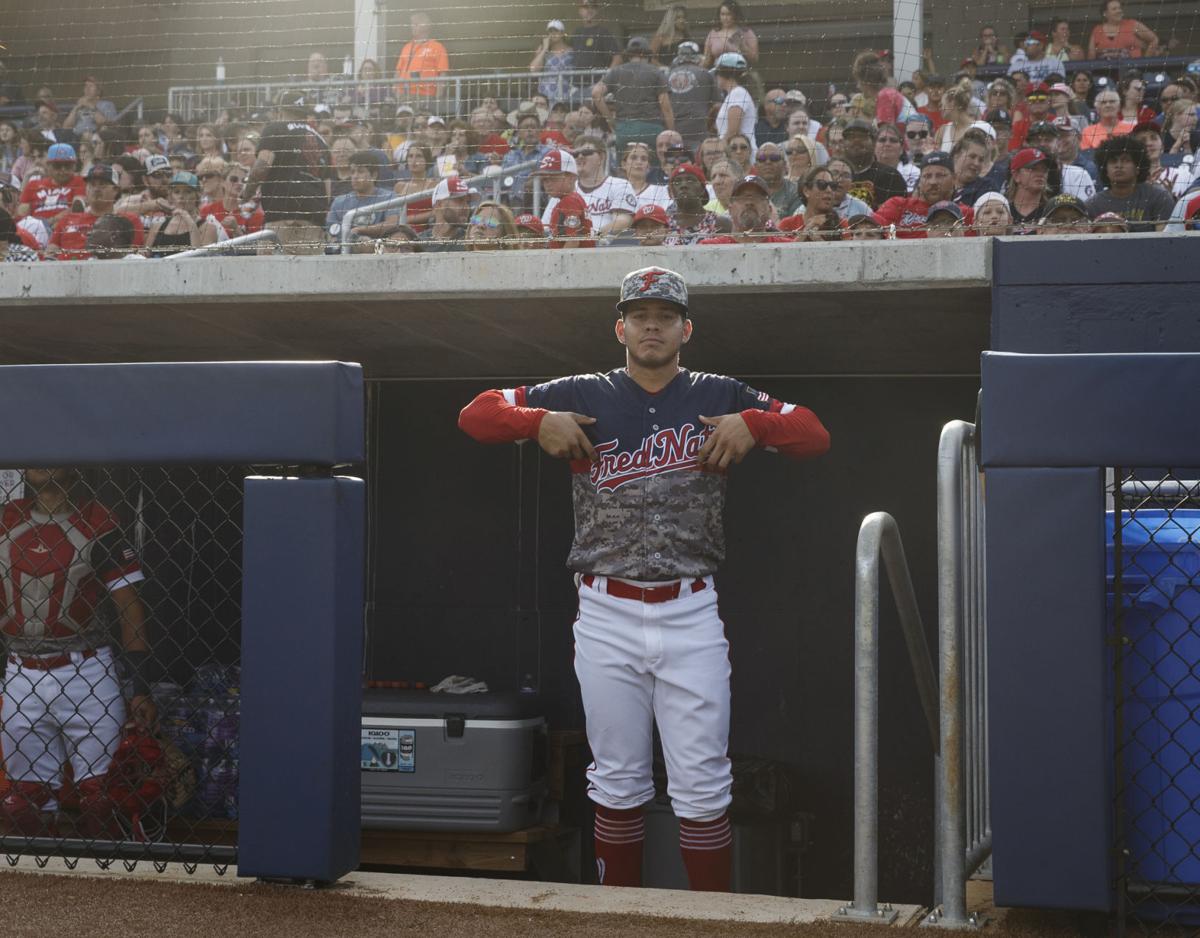 Méndez reps his FredNats jersey before a recent game.

Ricardo Méndez’s 17-game hitting streak has not become a trending topic in the Fredericksburg Nationals’ dugout. In fact, most of Méndez’s teammates only learned of his ongoing feat via a tweet issued by the team’s official account.

“I don’t hear much talk about it,” offered first baseman Kevin Strohschein.

Méndez’s numbers, however, speak for themselves.

During his streak, which dates back to July 2, Méndez is hitting. 435 with seven doubles, three triples and three home runs. He’s raised his season average to .301 and his OPS (on-base plus slugging) to .833. Both are team highs.

“Ricardo is using the whole field right now,” FredNats hitting coach Jorge Mejia said. “He’ll hit the ball from left center to right center, a gap-to-gap guy. He can bunt at times—but he can also hit a home run when you’re not expecting it. He’s a fun hitter to watch.”

Mejia offers a simple formula for Méndez’s recent success at the plate: he’s swinging at good pitches. More often than not, those good pitches are fastballs.

“This organization, all the way from the big leagues to the Dominican Summer Leagues, we emphasize hunting the fastball,” Mejia explained. “That’s the main goal, to be able to hit the fastball.

Born in Barcelona, Venezuela, Méndez joined a baseball academy called Sluggers Corporation in the nearby city of Puerto La Cruz. That’s where he eventually came onto the radar of several MLB teams, including Washington.

“It was tryout after tryout until the Nationals looked at me,” Méndez said in a phone interview, with FredNats manager Mario Lisson translating. “It was a few more workouts with them, and then they signed me.”

Only 17 when he began his career as an international free agent, Méndez has already made stops in the Gulf Coast rookie league, short-season Auburn (N.Y.) and Class-A Hagerstown prior to his assignment to the Low-A FredNats this season.

As prospects go, Méndez is an old soul with the work habits to match. He’s not superstitious, so it shouldn’t be considered unlucky that he didn’t even become aware of his own streak until it stood at 13 games.

Amid the losses, Fredericksburg Nationals had some highlights in inaugural season

Fredericksburg Nationals manager Mario Lisson once said that he has until 7:04 p.m. each night to develop players. After that, his focus shift…

Felix Hernandez looked every bit the part of a teenager when he arrived in the United States from Venezuela back in 2002. With one notable, me…

Connor McFarland fought his way through a gamut of emotions in the days leading up to his professional mixed martial arts debut, with anxiety …

The cars backed up Carl D. Silver Parkway, past the Fredericksburg Expo Center and all the way to Wegmans. This was the good kind of gridlock,…

FredNats dining offers something for everyone

They make time, father and son, usually in those quiet moments preceding first pitch when the former steals away to one of his 30 offices acro…

FredNats manager Mario Lisson fist-bumps Ricardo Méndez after he hit a triple against Kannapolis on July 6.

Ricardo Méndez’s 17-game hitting streak is by far the longest in the FredNats’ first season.

Méndez has gotten plenty of chances to run bases thanks to the 17-game hitting streak he took into Tuesday night’s game.

Méndez reps his FredNats jersey before a recent game.