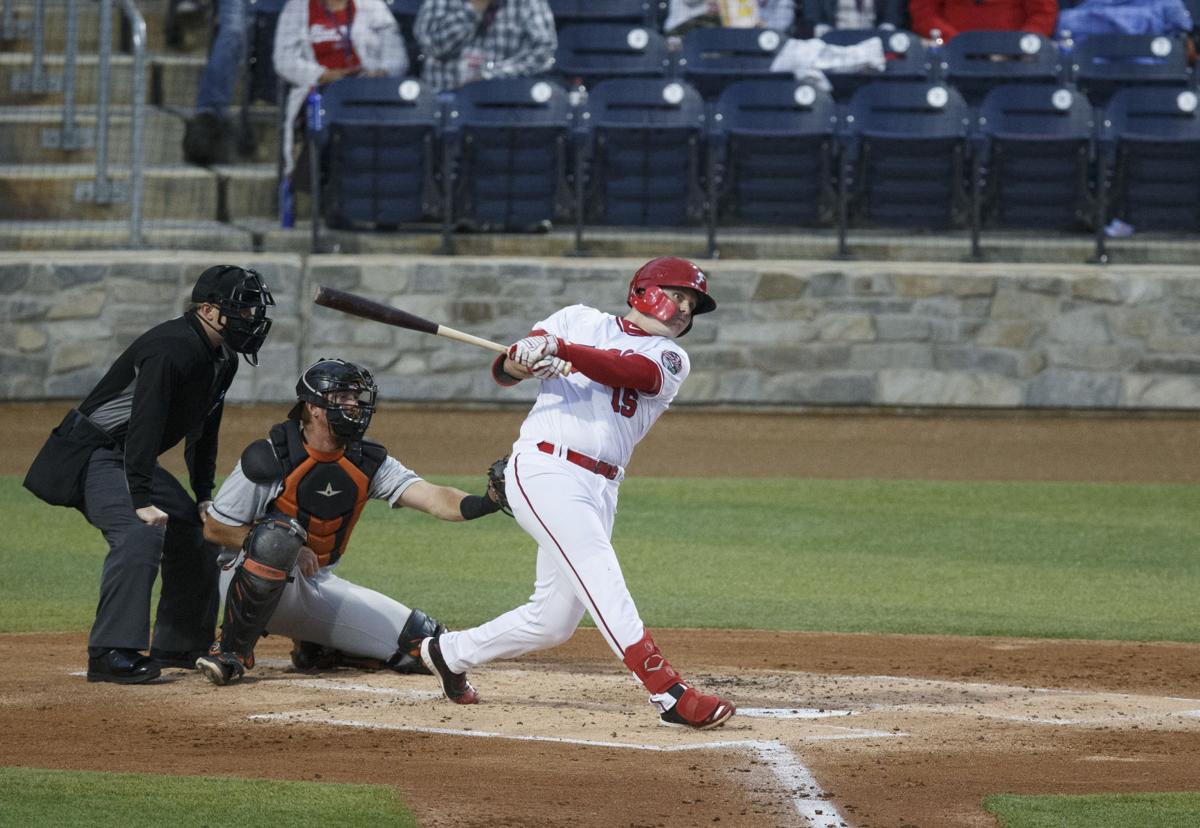 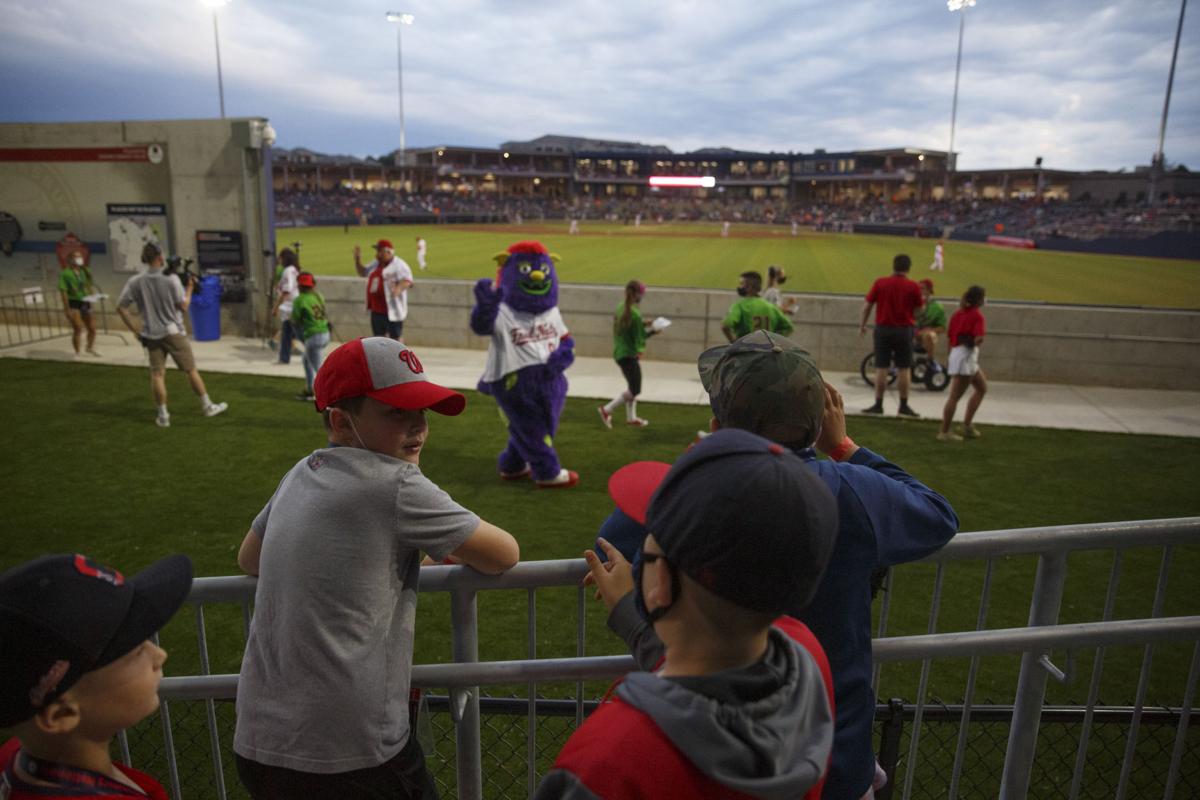 The Fredericksburg Nationals mascot Gus waves to young fans as the FredNats play the Delmarva Shorebirds for their home opener in Fredericksburg, Va. on Tuesday, May 11, 2021. 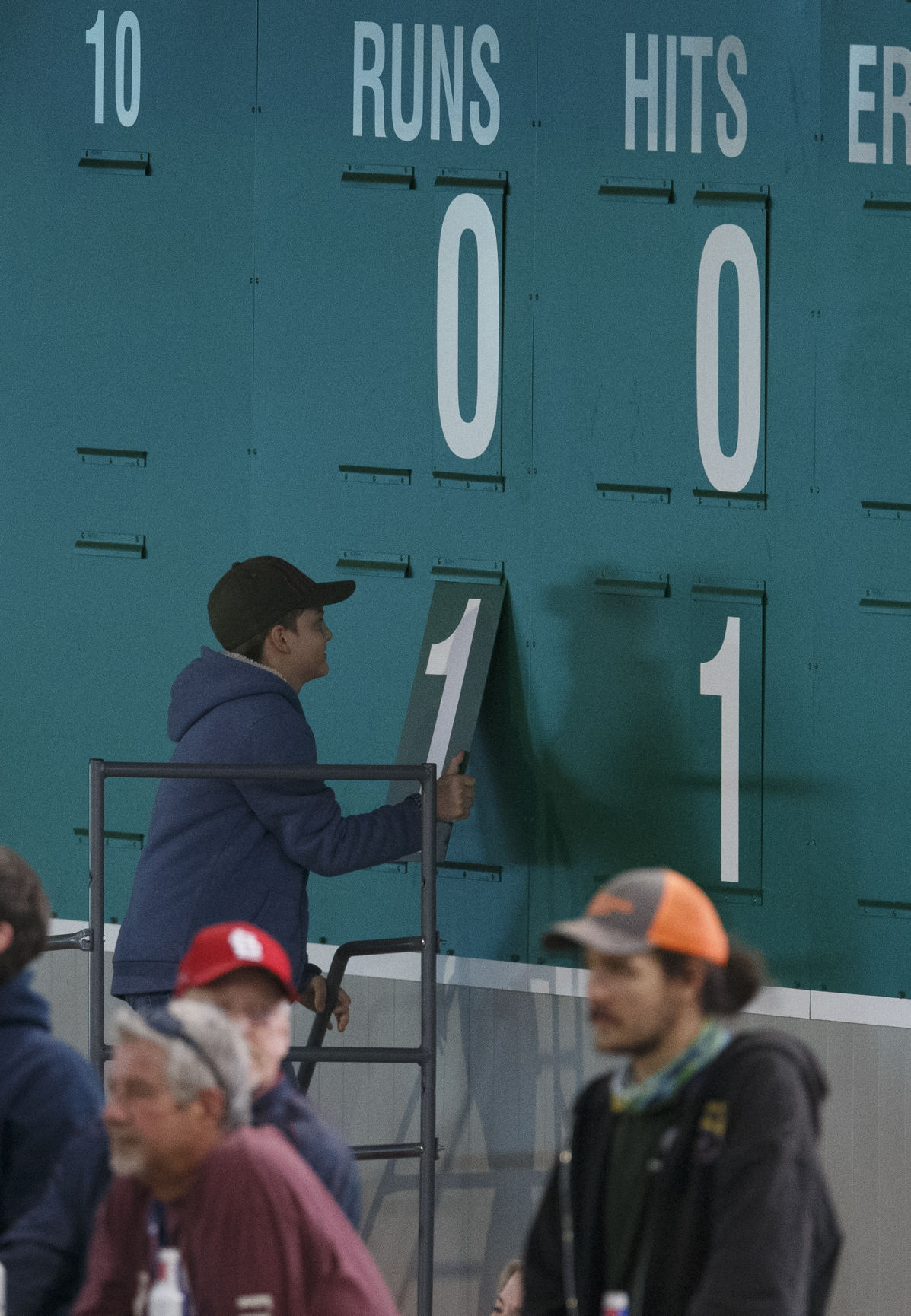 Charlie Hamann places the first run on the board for the FredNats as they play the Delmarva Shorebirds. 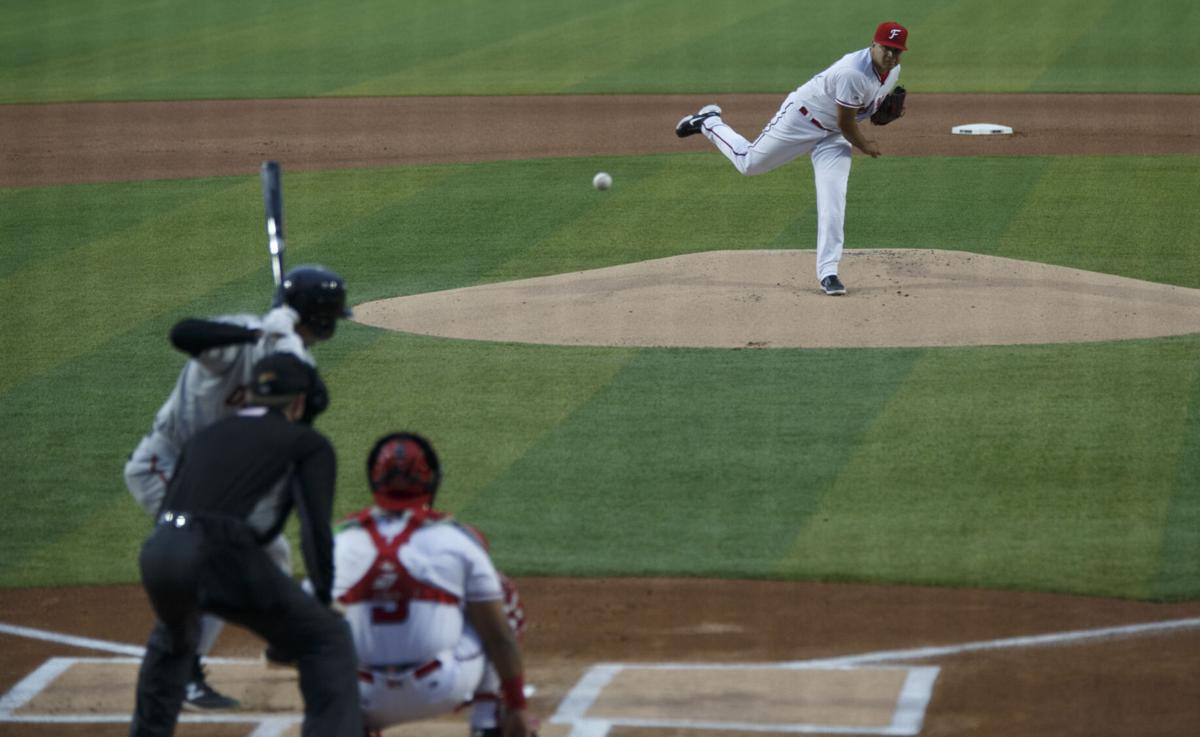 The FredNats’ Karlo Seijas delivers the first pitch in the team’s new stadium. A festive crowd was on hand to witness the first game. 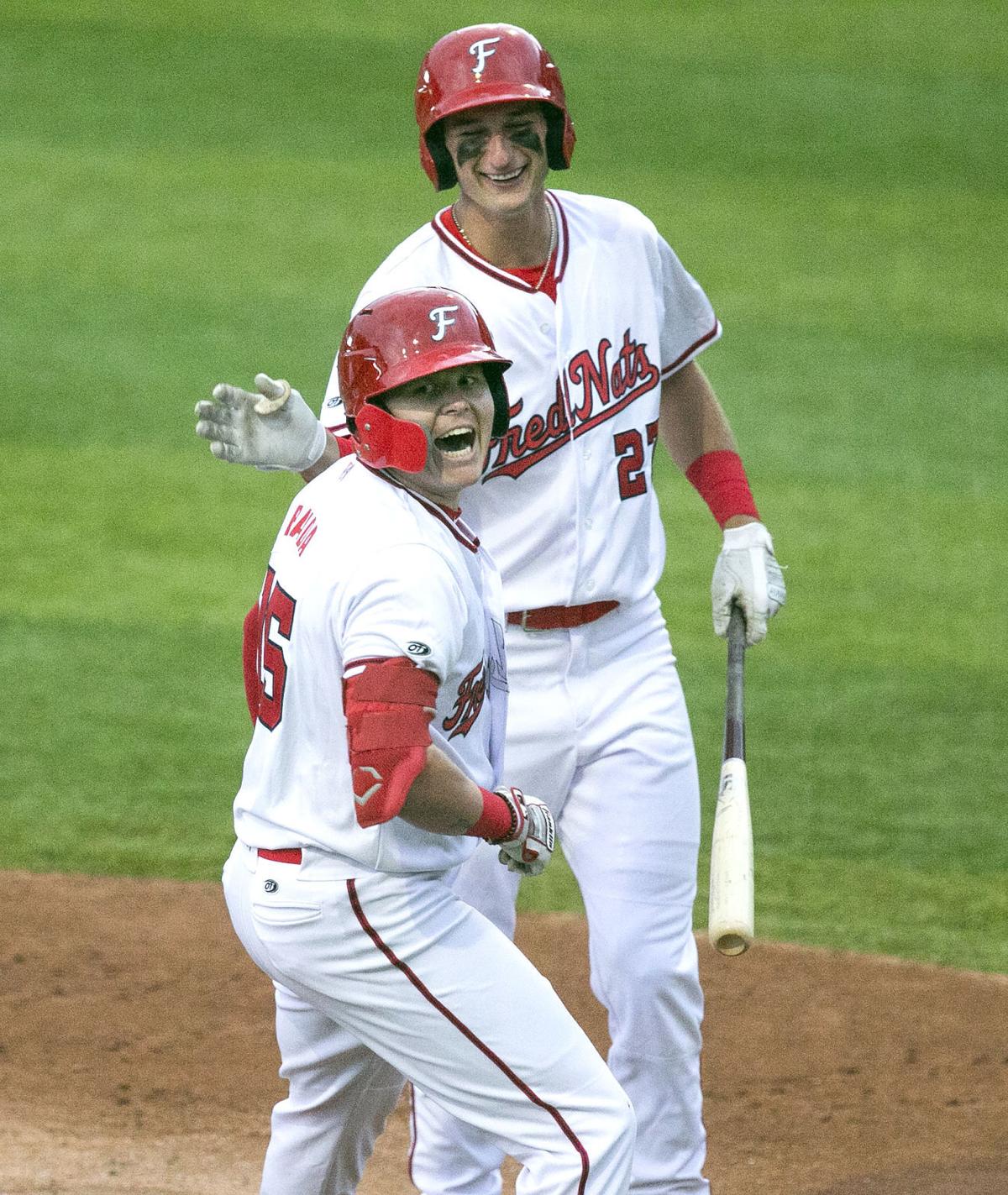 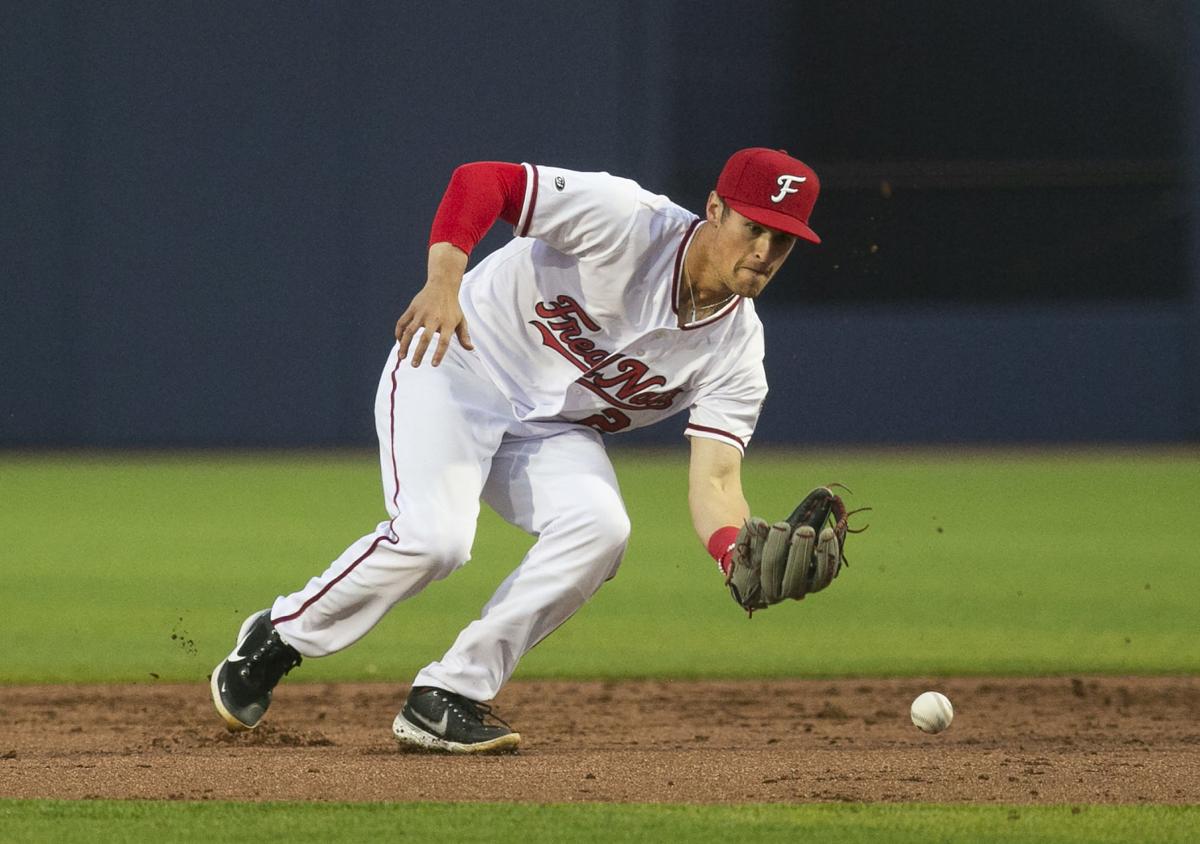 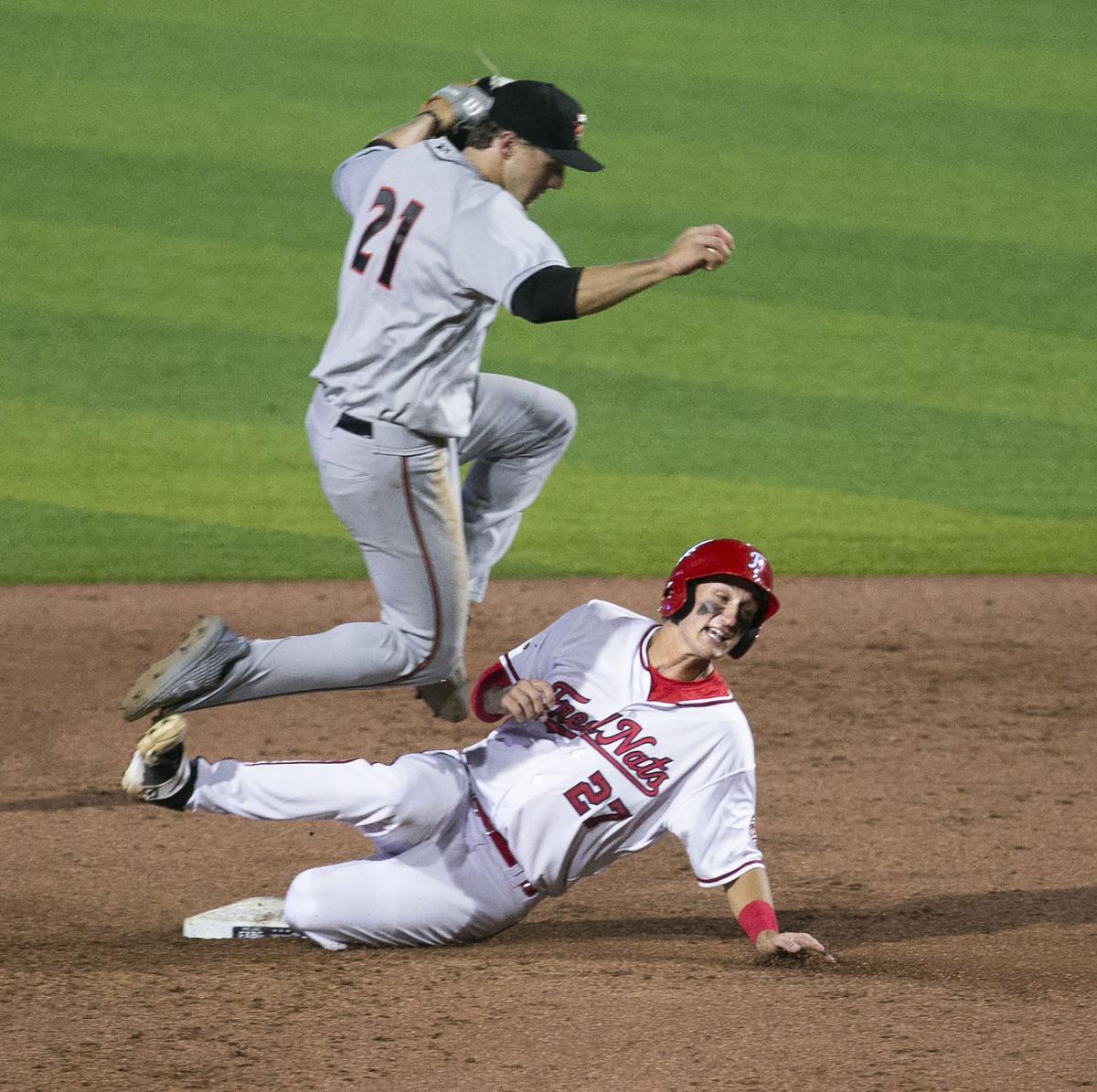 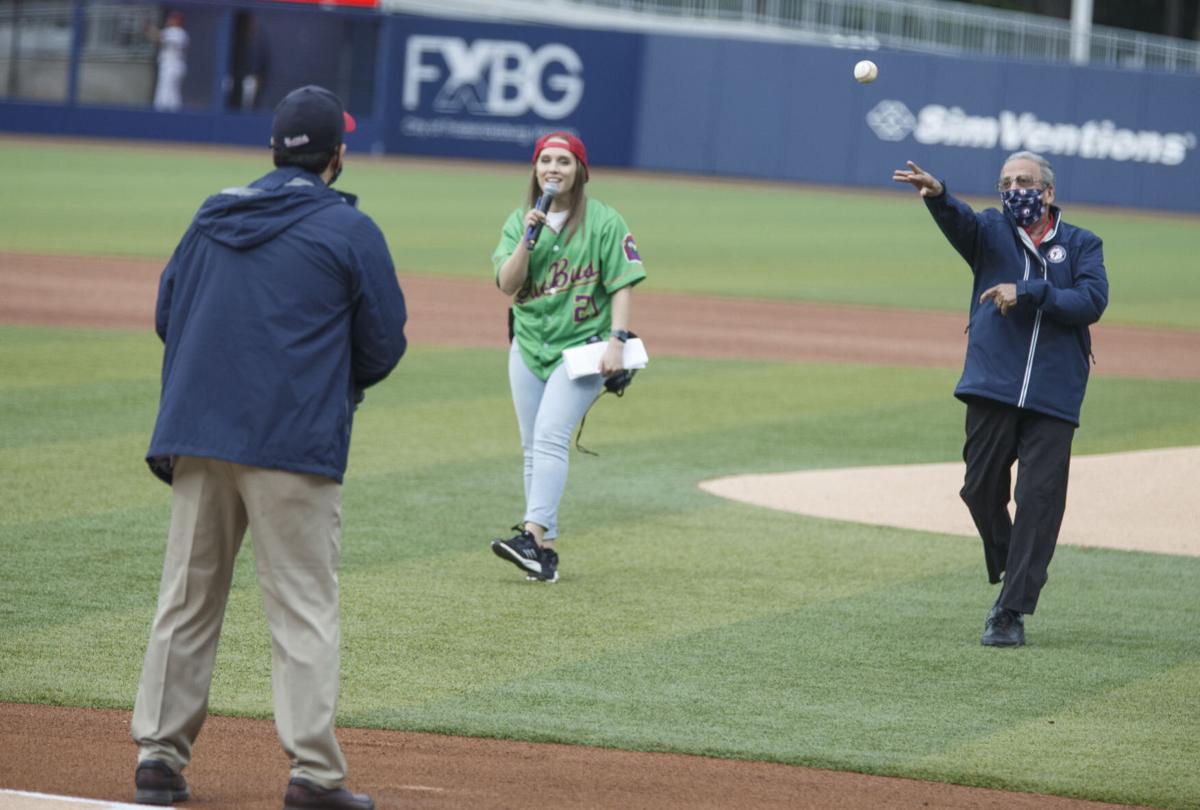 Team owner Art Silber throws the first pitch to his son Seth Silber before the home opener on Tuesday. 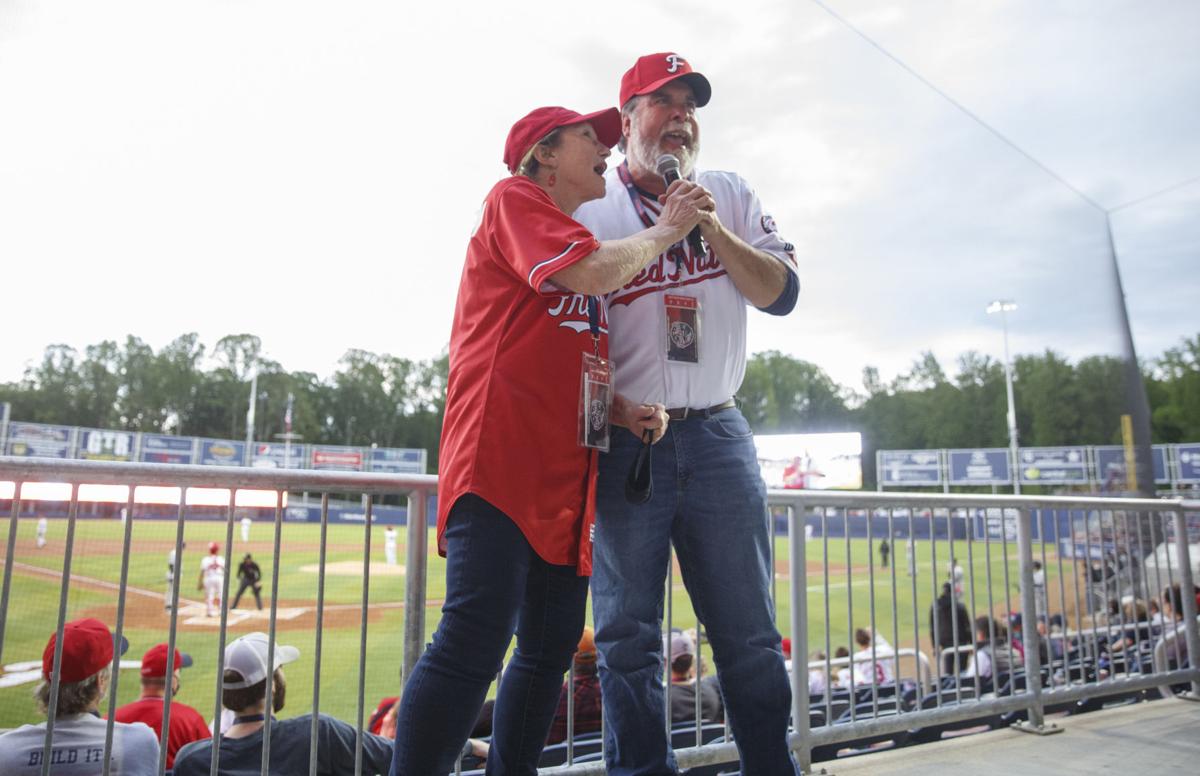 Roughly one-third of the announced sellout crowd of 2,065 stuck around for the end of the Fredericksburg Nationals’ inaugural home game Tuesday night. The lure of postgame fireworks certainly didn’t hurt, nor did the FredNats’ spirited ninth-inning effort.

But while the experience was a new one for a city that had never had a professional home team to root, root, root for, the outcome was disappointingly familiar: a 7–5 loss to Delmarva that dropped Fredericksburg’s record to 0–7.

You can’t blame those who left before the end of a contest that dragged on for nearly 3½ hours on a school night. But the long-awaited game showed exactly why fans’ patience will be mandatory for a young team that’s still mastering all the fundamentals of professional baseball, on and off the field.

The result shouldn’t diminish in any way the spectacle of the night. On a cool but gorgeous evening, the FredNats unveiled their gem of a Low-Class A ballpark, one that the Silber family had to wait out a year’s pandemic delay to show off.

And for a while, it looked as if a change of scenery was exactly what the FredNats needed after being swept in their opening six-game series in Lynchburg.

Starting pitcher Karlos Saijas, who toted a ponderous 81.00 ERA into his second pro start, held the Shorebirds hitless for the first three innings. And Jake Randa delivered a two-run, first-inning home run to give the FredNats a rare 3–0 lead.

But this is a team that doesn’t have a single player rated among the Washington Nationals’ top 30 prospects, according to Baseball America. So its margin for error is slim.

And even before an misplay allowed Delmarva’s Hudson Haskin to reach base and score on Gunnar Henderson’s towering go-ahead homer in the seventh inning, Fredericksburg fielders had already botched three balls that didn’t go in the scorebook as errors. And Jordan Bocko became the latest FredNats reliever to struggle, allowing Henderson’s blast and a laser into the right-field bullpen by Delmarva’s J.D. Mundy.

None of that is totally unexpected for a young squad that lost an entire year of competition to the pandemic. The visiting Shorebirds had sloppy moments of their own Tuesday night, just fewer of them.

Fortunately for the city and the franchise, they’re in this together. Fans here have been starving for a team of their own, and like a new parent, they’re learning just what they’re in for—some stressful and heartbreaking nights mixed in with moments of pure joy.

There are things to like. Randa and catcher Onix Vega look like they could become instant fan favorites. Vega’s enthusiasm is palpable, displayed most notably when he punched the air in celebration after Bocko struck out Delmarva’s Trevor Kehe with the bases loaded to end the sixth inning and preserve a 3–2 lead.

Shortstop Paul Witt, a former VCU standout, made a dazzling play in the hole in the top of the ninth inning to throw out a runner. And in the bottom of the frame, the FredNats showed they’re no quitters by scoring twice and bringing the potential tie run to the plate before J.T. Arruda struck out.

Like their team, the local fans showed they’re new at this, too. Routine fly balls hit by the home team drew excited gasps, and a few clear-cut calls by the umpires that favored the Shorebirds elicited undeserved boos. One spectator even bobbled a T–shirt tossed to him during a giveaway, losing it to a fan seated behind him.

So there’s plenty for all sides to work on. As we have discussed, minor-league baseball, especially at this level, is about far more than wins and losses.

Simply hosting a game Tuesday night represented a victory for the team and the town. Improvement is the next goal. It may take a while, but the fans seem to be fine with that.

Two dozen teams competed in this weekend’s Caddyshack Open at the Country Club of Culpeper to support SAFE, aka Services to Abused Families. T…

The Fredericksburg Nationals mascot Gus waves to young fans as the FredNats play the Delmarva Shorebirds for their home opener in Fredericksburg, Va. on Tuesday, May 11, 2021.

Charlie Hamann places the first run on the board for the FredNats as they play the Delmarva Shorebirds.

The FredNats’ Karlo Seijas delivers the first pitch in the team’s new stadium. A festive crowd was on hand to witness the first game.

Team owner Art Silber throws the first pitch to his son Seth Silber before the home opener on Tuesday.