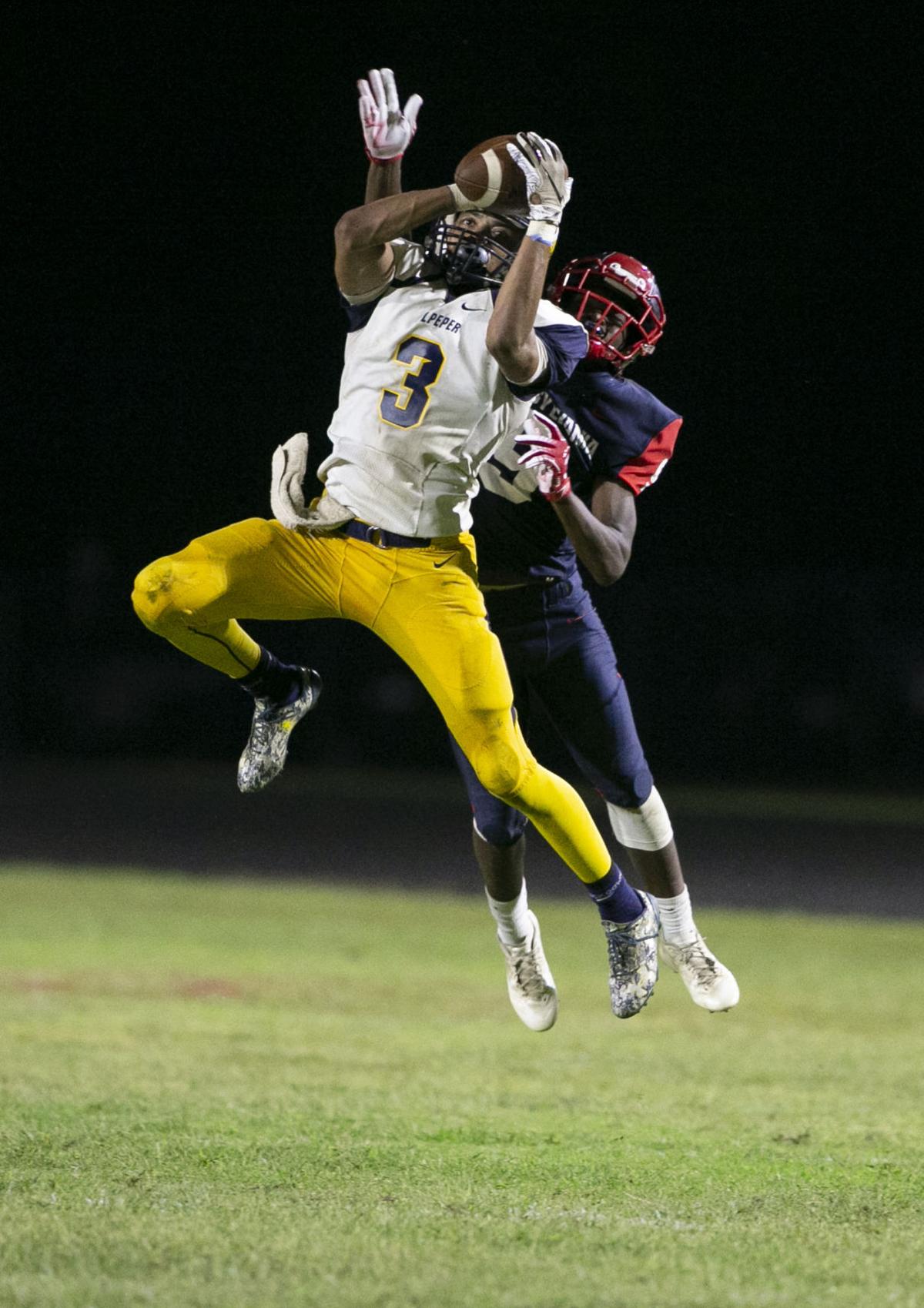 Culpeper’s Armani Hoffman pulls in a reception against Spotsylvania during a football game last September. The Blue Devils and Knights will once again be fellow members of the Battlefield District beginning in 2021-22 following the VHSL’s approval of Culpeper’s mid-cycle realignment on Thursday. 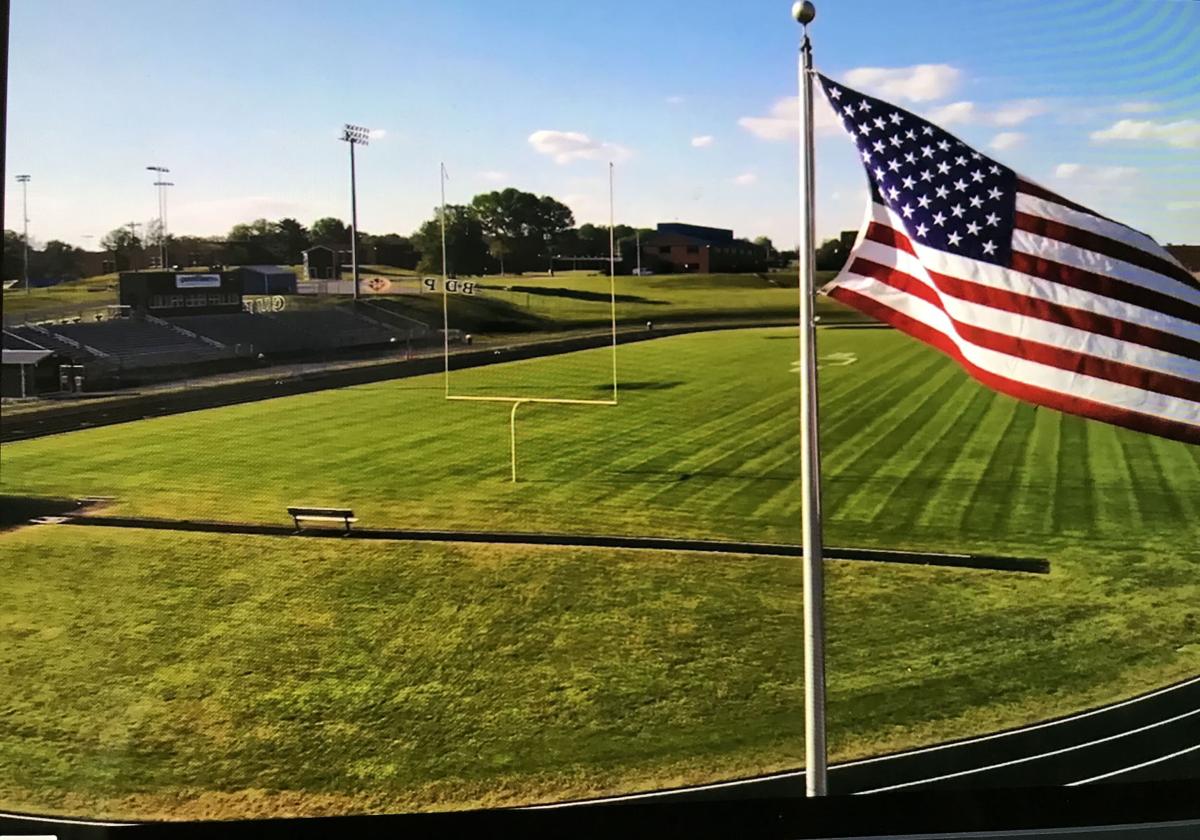 Drone footage of Culpeper High School’s Broman Field from May 2020. The VHSL voted on Thursday to allow the Blue Devils to return to Class 3 and the Battlefield District beginning in 2021-22.

Culpeper’s Armani Hoffman pulls in a reception against Spotsylvania during a football game last September. The Blue Devils and Knights will once again be fellow members of the Battlefield District beginning in 2021-22 following the VHSL’s approval of Culpeper’s mid-cycle realignment on Thursday.

Drone footage of Culpeper High School’s Broman Field from May 2020. The VHSL voted on Thursday to allow the Blue Devils to return to Class 3 and the Battlefield District beginning in 2021-22.

The Virginia High School League’s alignment committee approved Culpeper High School’s request for mid-cycle realignment by a vote of 12-11 Thursday afternoon, allowing the Blue Devils to move back to Class 3 beginning with the 2021-22 school year.

That wasn’t the only great news Culpeper received, however. The committee also voted 14-8 in favor of the Blue Devils returning to the Battlefield District upon their realignment.

Battlefield principals had previously approved Culpeper’s application to return to the district by a unanimous vote held on March 3.

“We are so excited for our student body to be going into the Battlefield District,” Blue Devils athletic director Danny Nobbs said. “It will allow for us to go back to some of our historical rivalries with the district’s other member schools.”

Culpeper principal Dr. Danny Soderholm praised the guidance of Nobbs, a Blue Devil alum who is entering his second year as the school’s AD, as a critical component in the realignment process.

“The leadership Danny has provided through this process has been priceless,” Soderholm said. “He competed in the Battlefield as a player and a coach for the Blue Devils in the 1990s and early 2000s, and he wanted to lead us back to historic rivalries.

“We feel like this is the best placement for our school in terms of travel time and the size of our school,” he concluded.

Culpeper competed in the Battlefield for the better part of three decades before leaving for the first time to join the Commonwealth District in 1996. The Blue Devils returned to the district for a short stint from 2009-13 before departing again to join the Evergreen District.

When the Evergreen disbanded in 2017, Culpeper transitioned to the Northwestern District, where it’s been ever since.

Typically, the VHSL only realigns its member schools every four years based on projected enrollment figures. The current cycle only began last year, but the Blue Devils had a very compelling reason for their desire to move.

Still a Class 3 school during its first two years in the Northwestern, Culpeper was bumped up to Class 4 based on projected enrollment numbers when the model for the current cycle was approved in early 2019. That forced the Blue Devils to go from playing the district’s Class 3 teams--local opponents such as William Monroe, Warren County, Skyline, Brentsville and Manassas Park that are all within a 40-mile radius of Culpeper--to making lengthy trips to Class 4 members Handley, Millbrook and James Wood, which are all in excess of 60 miles away.

One Blue Devils’ coach, speaking under condition of anonymity back in January, said making the regular commutes to those Winchester-area schools wasn’t reasonable for Culpeper’s teams--especially on school nights.

“We had to make multiple trips over the Shenandoah Mountains to play those teams on weeknights,” they said. “In some cases, we had almost a two-hour commute just to get there. Your kids sit on a bus for that long, then are expected to play a game, then get right back on a bus for almost two more hours just to get back to our school. Some kids weren’t getting home and into bed until after midnight, then having to be up early and back at school the next morning.

“It’s one thing when you schedule a nondistrict road game against an opponent that far away,” the coach continued. “You can try and schedule that sort of thing for a Friday night so the kids don’t have an early wake-up call the next day. But when it’s a regular thing within your district, it isn’t beneficial or fair to our kids to expect them to perform at a high level on the playing field or in the classroom with those commutes.”

Among Battlefield teams, Caroline and King George are both located between 50-60 miles from Culpeper and will be the Blue Devils’ longest drives at approximately one hour and 10 minutes each. However, the district’s other five members (Chancellor, Courtland, Eastern View, James Monroe and Spotsylvania) are all less than 40 miles away, with JM the farthest at 38 miles and county rival Eastern View the shortest at just four.

“We had to do what’s best for the students of Culpeper,” Nobbs said. “We’re saving an average of 22 miles one way in travel by moving back to the [Battlefield]. “We feel like if our students have more time with their families and more time in the classroom, they’ll be better off.

Courtland’s Ronnie Lowman, the Battlefield’s longest-tenured AD, said the Blue Devils are a natural fit in the district for multiple reasons, including making scheduling easier for the other Battlefield schools and also keeping rivalries intact.

“For those of us that have been in the area a long time, Culpeper, in our eyes, is still a Battlefield District school,” said Lowman, who served as the Cougars boys basketball coach before taking over as AD in 2004. “Any time you can add a school that’s local to the mix, I think it’s a good thing for all the communities.”

Eastern View AD Mark Settle, who’s held that position for the Cyclones since the school opened in 2008, echoed Lowman’s sentiments.

“It just makes sense,” said Settle, who graduated from Culpeper in 1984 and went on to teach, coach and serve as an assistant principal there before making the move across town to Eastern View. “They’re literally right around the corner from us, and they already play several Battlefield schools, including us, on their nondistrict schedules. They should be a part of the same district and region as we are, and there really was no better time than right now to get the wheels rolling on bringing them back home. I think their athletic programs will really benefit from the move.”

While the large majority of the district’s teams are in Class 4 and will therefore continue to compete in Region 4B in the postseason, Culpeper joins JM as the Battlefield’s lone Class 3 school. That means the Blue Devils will once again compete against the likes of the Yellow Jackets and the Northwestern District’s Class 3 members as part of the Region 3B playoffs--something they did regularly prior to their relocation to Region 4B last year.

“There’s definitely going to be a lot of familiarity, both in terms of playing the Battlefield schools and then facing the William Monroes, Manassas Parks, Brenstsvilles and so on in the playoffs,” said longtime Culpeper boys basketball head coach James Thompson. “We’re actually more familiar with those teams’ personnel since we played in the same district as them not long ago. Overall, it’s a good move for us.”